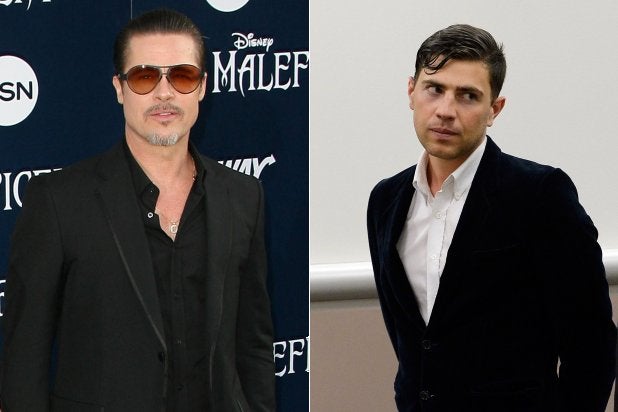 Brad Pitt has spoken out for the first time since he was attacked at the Los Angeles “Maleficent” premiere on May 28. Pitt was attending with Angelina Jolie and their children when he was attacked by notorious red carpet prankster Vitalii Sediuk.

“I was at the end of the line signing autographs, when out the corner of my eye I saw someone stage-diving over the barrier at me,” Pitt said in a statement to People magazine. “I took a step back; this guy had latched onto my lapels. I looked down and the nutter was trying to bury his face in my crotch.”

The crotch-hug tactic had been used before by Sediuk, in attacks on Bradley Cooper and Leonardo Di Caprio.

Pitt went on, adding, “So I cracked him twice in the back of the head – not too hard – but enough to get his attention, because he did let go. I think he was then just grabbing for a hand hold because the guys were on him, and he reached up and caught my glasses.”

Pitt’s glasses were broken in the scuffle, and Sediuk was arrested and booked for misdemeanor battery. Bail was set at $20,000. Pitt continued signing autographs, but later filed a restraining order against Sediuk.

After pleading no contest to battery and unlawful activity at an event, Sediuk was banned from future Hollywood events, and sentenced to 20 days of community service, a year of counseling, and three years of probation.

“I don’t mind an exhibitionist,” Pitt added in his statement to People. “But if this guy keeps it up he’s going to spoil it for the fans who have waited up all night for an autograph or a selfie, because it will make people more wary to approach a crowd. And he should know, if he tries to look up a woman’s dress again, he’s going to get stomped.”

Sediuk’s most recent action prior to the assault on Pitt was to run out and stick his head under America Ferrara’s dress at the Cannes premiere of her film, “How to Train Your Dragon 2.”