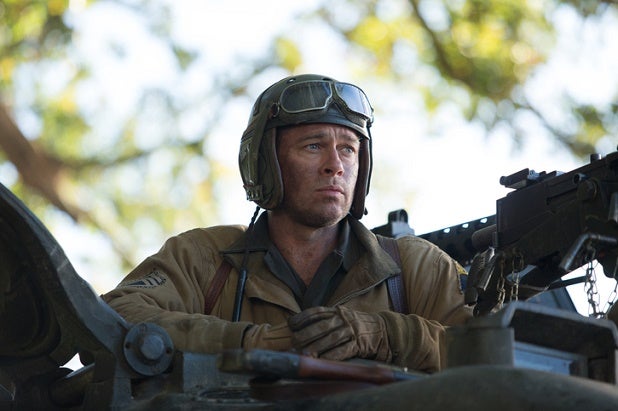 Brad Pitt‘s bloody “Fury” blasted its way to an $8.8 million Friday that put it on pace for $25 million opening weekend triumph at the box office.

Sony’s R-rated saga about a tank crew behind Nazi lines in World War II will end the two-week run at No. 1 of “Gone Girl.” The debut by the David Ayer-directed “Fury” will top the $22 million February opening of George Clooney‘s “The Monuments Men,” but fall well short of the $38 million that another Pitt war drama, “Inglourious Basterds,” opened to in 2009.

The audience for “Fury” included more women than might be expected — 60 percent were men — perhaps owing to Pitt’s appeal. It also played younger than a WWII movie might be expected to, with nearly half the crowd under the age of 35. It received an “A-” CinemaScore, in line with the critics who have it at 80 percent positive on Rotten Tomatoes.

Fox and New Regency’s Ben Affleck murder mystery “Gone Girl” brought in $5.5 million Friday and was heading for roughly $18 million, which will lift its domestic total past $100 million.

It was in a tight race for second with another Fox-distributed film, the PG-rated animated tale “The Book of Life.” The Guillermo del Toro-produced family film from Reel FX Animation Studios, written and directed by Jorge Guitterez,  was third on Friday with $4.9 million. and should get a big boost from Hispanic families on Saturday and Sunday.

The weekend’s other wide opener, the Nicholas Sparks romance “The Best of Me,” took in $4.1 million on Friday and is heading for a $12 million weekend. That would be in line with Relativity Media’s expectations for the female-targeting drama starring Michelle Monaghan and James Marsden, but at the low end for Sparks’ previous films. Audiences gave it a “B+” CinemaScore, much better than the critics, who have it at a dismal 7 percent positive on Rotten Tomatoes.

Also read: ‘The Best of Me’ Gets ‘Worst’ Reviews: 11 Critics Who Love to Hate the New Nicholas Sparks Movie

It was running behind Disney’s family film “Alexander and Terrible, Horrible, No Good, Very Bad Day. ” The comedy starring Steve Carrell and Jennifer Garner brought in $3.2 million, and if it gets the expected boost from the minivan crowd Saturday and Sunday, should wind up at north of $13 million in its second weekend. That would be a terrific hold — down just 27 percent from its first weekend — for “Alexander.”

Robert Downey Jr.’s “The Judge” took in $2.4 million Friday and is looking at an $8 million second weekend. That would be just a 40 percent drop, good news for Warner Bros., which is hoping that the courtroom drama co-starring Robert Duvall will show staying power.

“The Judge” was in seventh, behind Universal’s “Dracula Untold,” which is on course for a $9 million sixth place finish in its second weekend.

Also read: ‘Birdman’ Reviews: Michael Keaton Soars, But Does the Rest of the Film?

On the specialty front, the superhero sendup “Birdman” was heading for one of the biggest limited debuts of the year. Alejandro Gonzalez Inarritu’s dark comedy starring Michael Keaton took in an estimated $136,000 from four theaters in New York and Los Angeles. That’s a very strong $33,901 per-screen average for the Fox Searchlight awards hopeful, and projects to a per-theater average of more than $118,000 for the three days.

Writer-director Jason Reitman’s “Men, Women & Children” continued to struggle as Paramount expanded it to 608 theaters. The drama with an ensemble cast including Adam Sandler, Ansel Elgort and Jennifer Garner brought in just $94,000. That projects to puny $307,000 for the three days, and a per-screen average of just over $500.