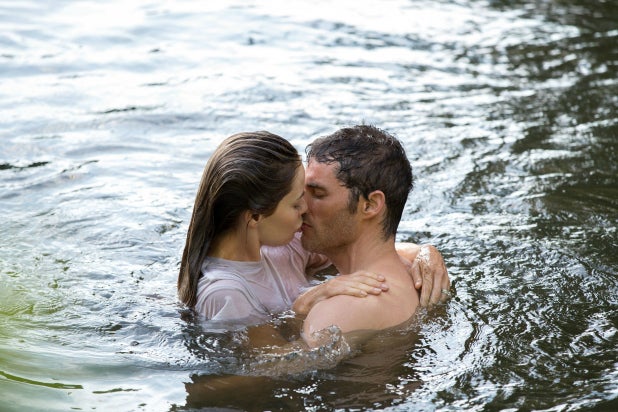 It hasn’t even been two years since “Safe Haven” was obliterated by critics when it hit theaters in 2013, but Hollywood is already rolling out another weepy Nicholas Sparks adaptation. This time, the love story about a guy from the wrong side of the tracks falling for a rich chick amid flashbacks between past and present (yes, that’s “The Notebook” formula all over again) is called “The Best of Me.”

Unfortunately for anybody involved — who care about anything other than box office returns, at least — “The Best” has received the worst critical reception of any Sparks adaptation to date.

Also read: Will Nicholas Sparks’ ‘Best of Me’ Ignite the Passion of ‘Notebook,’ ‘Dear John’?

The calculated romantic drama starring James Marsden (“X-Men”) and Michelle Monaghan (“True Detective”) has just a 7 percent approval rating from critics counted on Rotten Tomatoes, which is a new low for Sparks. Even critically-panned “Safe Haven,” a movie most remembered for its M. Night Shyamalan-like ending, stands taller with a 12 percent approval rating.

But with only 50 reviews in so far, there’s still time for “The Best of Me” to gain a few more fans. Based on the rotten reviews, however, the odds don’t look good.

So why waste your time and money to discover just how awful this movie in theaters, when you could just read about it on your computer? Here are 11 brutal blurbs from critics that might be written better than the “Best of Me” screenplay.

“If ‘The Best of Me,’ the latest Nicholas Sparks adaptation to show up on the big screen, were to be given a report card, it’d be one of those oddly polarized documents that confuse parents and dismay teachers: Straight A’s for chemistry, but F’s in basic composition, drama, creative writing, and every other subject.”

“High emotion melodrama that carries about as much real-world authenticity as an installment of ‘The Avengers.’ As the drama unfolds the ludicrousness of J Mills Goodloe and Will Fetters’s script intensifies and the dramatic punches are more liable to provoke howls of laughter than tears of sadness.”

“As any fan of ‘The Notebook’ knows, some Nicholas Sparksadaptations deserve to be praised as cozy romantic escapism. And then there are those gauzy odes to overwrought sentimentality that embarrass everyone. Like, say, ‘The Best of Me.'”

“Marsden and Monaghan are fine actors, but you’d swear: The umpteenth time Monaghan has to look frozen in love/disappointment/heartsickness/wonder, she’s adding a frisson of “Again, really?” And when this swollen case of meant-to-be-itis crams in prison and a heart transplant, you might be staring, too, wondering if the title “The Best of Me” more accurately indicates a K-Tel package of every tear-jerker trope in existence.”

“The only thing ‘The Best of Me’ really wants is to weave a teary-eyed romantic spell by any means necessary. The screenplay is so haphazardly constructed that when the movie seems to be ending, it refuels with preposterous new developments. The teenage girls sitting around me at the screening, who had sighed wistfully at the lovers’ first kiss, eventually lost patience and began to giggle. Even the movie’s target audience recognized when “The Best of Me” became too much of a bad thing.

Much of the dialogue for this terminally mawkish tearjerker sounds as if it has been taken directly from a Dolly Parton or Whitney Houston song. “I will always love you” or “You are the very best of me” are what passes for small talk when the characters here aren’t otherwise engaged in trying to see their destiny in the stars.

“For all its casual mistakes, ‘The Best of Me’ didn’t prepare me for that astoundingly bad ending – where the complete laundry list of lazy romantic-drama clichés collide like a heartbreaking, 15-car pile up on the side of Lover’s Lane. Right when I was ready to dismiss ‘The Best of Me’ as passable broth for the lovesick Sparks faithful, that conclusion dropped… ensuring that this disastrous adaptation would be remembered after all – for all the wrong reasons.”

“Maybe ‘The Best of Me’ will make a killing. It’s based on a Nicholas Sparks novel, which is a surefire indication of what we’ll get: a love story about as moving and genuine as a ballad crooned by a studio-manufactured boy band. They hit the right notes, but there’s not a drop of soul. There is, however, a convoluted plot that relies on flashbacks and two sets of actors for the same roles, along with a final-act twist that is jaw-droppingly manipulative. What’s not to like?”

“The Best of Me” might have been the worst Nicholas Sparks movie ever… not that I’ve seen enough others for comparison. The fact that it’s corny, dumb and predictable and rife with clichés is exacerbated by the fact that everything about it just seems lazy.

“It’s entirely possible that the lead character’s name is a sly in-joke on Sparks’s part, because the flashback scenes here are so unnervingly redolent of turn-of-the-millennium teen TV weepathon ‘Dawson’s Creek’ that you half expect James Van Der Beek and his Mount Rushmore forehead to come blundering in at any moment. It all comes to a head with the most woefully misjudged, jaw-on-the-floor last-act twist in recent cinema history – which is saying something. Movies this silly, crass and manipulative really shouldn’t be allowed to exist in 2014. But we’re guiltily glad that they do.”