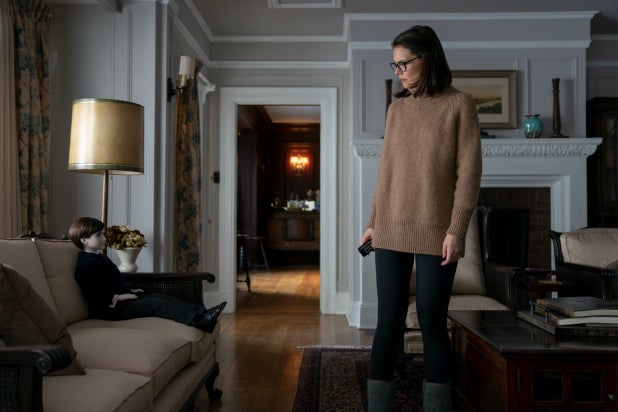 It’s a hard to believe that several millennia after the invention of the written word, there are still some sentences that have never been put in print. Case in point: “Brahms: The Boy II” is the “Star Wars: Rise of the Skywalker” of horror.

Those are words that were probably not designed to go together, and yet here we are, in the year 2020, and the comparison seems weirdly apt. Much like the latest “Star Wars,” William Brent Bell’s sequel to his unexpectedly successful — and genuinely scary — 2016 horror-thriller seems determined to undermine all smart storytelling of the film that preceded it, to the detriment of both.

“Brahms: The Boy II” takes the best elements from “The Boy” and reverses course so abruptly, it practically leaves skidmarks on the screen. It’s not just a subpar sequel; it retroactively injures an otherwise superior film.

The original “The Boy” starred Lauren Cohan as a nanny hired, to her eerie surprise, to take care of a porcelain doll all alone in a giant, gloomy mansion. Over the course of the film, she became convinced that the doll, named “Brahms,” was really alive. The film took its time and actually convinced the audience, subtly and disturbingly, that Brahms was more than he appeared, without ever showing the doll do anything specifically supernatural.

The cleverest part of “The Boy” was that all the familiar, creepy doll horror movie clichés were — Spoiler Alert, but “The Boy II” assumes you already know it from the start — nothing but a red herring. The doll was never alive, it was just a representation of the real person our hero was babysitting: a homicidal maniac who was living inside the walls of the house the whole time.

The sequel takes that intelligent and startling story and kicks it to the curb, telling instead a new tale about how no, really, that doll was supernatural all along. It’s clear from very early into “Brahms: The Boy II” that the porcelain idol is moving on its own, right in front of the camera, rendering the concept of plausible deniability completely moot. The suspense is dead, the cleverness has vanished, and the genre-bending ingenuity of the original is completely subverted.

Also Read: Harrison Ford's 'The Call of the Wild' Faces Off Against 'Sonic' at This Weekend's Box Office

“Brahms: The Boy II” stars Katie Holmes as Liza, whose idyllic home life was shattered during a shocking and random home invasion, which her son Jude (Christopher Convery, “The Girl in the Spider’s Web”) tragically witnessed. Months later, Liza is suffering from nightmares, and Jude hasn’t spoken a word since the incident, so along with Disbelieving Husband #1,923 — a.k.a. Sean (Owain Yeoman, “The Belko Experiment”) — they move to the countryside, into the guest house behind the mansion from the original film.

It only takes a few minutes for Jude to discover Brahms, buried in the woods, and declare (via a notebook) that they’re taking him home. Liza and Sean are creeped out by the creepy doll because creepy dolls are creepy, but they quickly convince themselves that Brahms is a coping mechanism for Jude which could lead him back to mental health. Never mind that Brahms moves on his own, or that their son is starting to dress like him, or that Jude’s notebook is now full of scary drawings of his parents lying dead in their beds.

Except, of course, that Liza minds very much. “Brahms: The Boy II” is ostensibly about coping with trauma, and watching the people you care about cope with trauma. Liza wants Jude to get better, but she’s also impatient with the whole Brahms scenario. It doesn’t help that her own post-traumatic stress is being treated entirely via self-help books, which don’t seem to be (self-)helping. Sean disbelieves Liza’s suspicions that Brahms is a creepy doll just as much as Liza disbelieves Jude, and they all have a valuable lesson to learn about validating each other’s feelings and listening without letting preconceived notions mar their judgment.

Also Read: 'The Call of the Wild' Fetches $1 Million at Thursday Box Office

But whereas a film like “Hereditary” dug deep into the psychological quagmire of a family reeling from tragedy, “Brahms: The Boy II” can’t even make a strained dinner table argument about a supernatural doll seem stressful. Moving the action to the guest house doesn’t help — the gothic atmosphere of the original amplified the scares; the hotel-room atmosphere of the vacation home makes them all banal — but the screenplay by Stacey Menear (who also wrote the original) doesn’t seem eager to dig deep into how pained everybody is and how they’re contributing to each other’s anxieties and unhappiness.

So a celebration really is in order for Katie Holmes, who infuses her role in “The Boy II” with all the nuance and depth any actor could muster. She’s so adept at staring skeptically off-camera that she should have her own detective series. Holmes finds the reality within a formulaic and humdrum horror-thriller and gives a performance that belongs in a superior film. The only time she even remotely breaks character is during the movie’s wonky climax, where if you look very carefully, you might catch the surreptitious smirk of an actor who is thrilled to be done with this.

It’s easy to nitpick “Brahms: The Boy II” because, for a lot of the movie, there’s not much else to do. Director Bell tips the movie’s hand so soon, revealing that Brahms really is supernatural practically right away, that most of the running time is spent waiting for the protagonists to catch up. So the only entertainment value we get is chuckling at ridiculous historical montages full of unconvincing Photoshop, or incredulous lines like, “So you’re saying he ripped pages out of his book?!” which imply that nobody has ever removed pages from a notepad before in the entire history of human civilization.

All of this would be forgiven if “Brahms: The Boy II” was fun, or scary, or interesting. You can probably predict where the rest of this paragraph is going. The film has no suspense, wit or shock value. It’s too ploddingly paced to elicit a proper jump scare, and it’s nowhere near insightful enough to get under the skin. The only thing interesting about this disappointing follow-up is how it takes the original film down with it, retroactively hurting the chances of “The Boy” becoming a beloved cult classic.