This story about Brandi Carlile and Tanya Tucker first appeared in the Race Begins issue of TheWrap’s awards magazine.

It began with a conversation about death. After the making of “The Return of Tanya Tucker—Featuring Brandi Carlile,” the Oscar-eligible documentary that chronicles the comeback of country firebrand Tucker with an album co-produced and largely written by Carlile, the two women were having a quiet dinner in Nashville when the conversation turned to the people they’d lost during COVID.

“We’d lost John Prine, and she lost Billy Joe Shaver, who was a real friend of hers,” Carlile said to TheWrap. “I said to her, ‘Tanya, I’m really sorry about Billy Joe passing away,’ and she said, ‘Oh, I’m the youngest of all those guys. I’m gonna have to watch them all get their wings before me. I guess I’m ready.’ And then she looked at me and said, ‘Ready as I’ll never be.’”

By this point Carlile was experienced at drawing from moments in Tucker’s stormy life to write songs for her, culminating with “Bring My Flowers Now,” which won the 2020 Grammy for Best Country Song.

“I just went home and went into the inventory of Tanya’s memories that she so freely shares,” Carlile said. “She tells me these stories, and I remember them like they were mine. I wrote her story into the verse, and tried to empathize with what she’s going through and what she’s going to continue to go through in her time here.”

Tucker added, “I love that line, ‘Every time I kiss a weathered cheek.’ Because I think of Ernest Tubb, and I remember kissing him right after he let me sing on his show in Wilcox, Arizona, when I was 9 years old. I went to his cheek, and it was just so weathered and soft.” 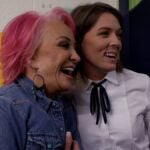 Of course, the song has lines that sound like Carlile, too: “I always was and always will be looking up,” for example, calls to mind not only the look we see in the film when Tucker delivers a wrenching vocal and Carlile looks on in undisguised awe, but also the similar look in the viral videos of the recent Newport Folk Festival performances by a frail but ageless Joni Mitchell, another comeback Carlile helped engineer.

“I have to feel it myself,” Carlile said. “Otherwise I couldn’t have written it. I haven’t had too many of these hard goodbyes yet, but I’d be lying if I said it doesn’t keep me up at night sometimes.” Recording “Ready As I’ll Never Be,” Tucker said, was difficult. “I just wasn’t getting it,” she said. “So I went out to the garage and started practicing. I needed to take a few more swings at it, because I hadn’t gotten it.” She laughed. “Brandi thought I had left and gone to bed, but I just needed to do it my way.”