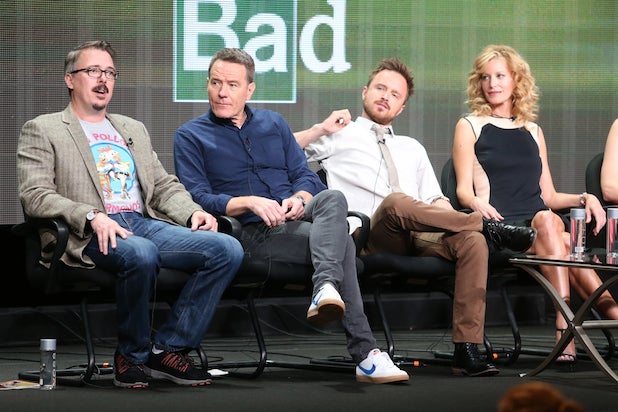 “Breaking Bad” may be over, but some of its stars’ careers are just heating up.

Bryan Cranston, who portrayed chemistry teacher-turned-drug lord Walter White, has been snagging major roles in major movies (“Argo,” “Godzilla”) for some time now. And his co-star, Aaron Paul, is following the same strategy.

The 34-year-old actor will next be seen putting the pedal to the metal in “Need for Speed,” an adaptation of Electronic Arts’ long-running video game franchise. Paul plays an ex-convict who joins a cross-country car race in hopes of exacting revenge on the former partner (Dominic Cooper) who framed him.

Paul isn’t gambling his entire career on one potential action-packed blockbuster, however. He’s starring opposite Juliette Lewis in writer-director Kat Candler’s indie drama “Hellion,” which focuses on a fractured family trying to hold it together in a small refinery town in Texas.

Paul is also starring in the ensemble drama “A Long Way Down,” an adaptation of the Nick Hornby novel about four suicidal people who form a surrogate family to help each other through tough times after meeting on top of a tall building on New Year’s Eve. Pierce Brosnan, Toni Collette, Rosamund Pike and Imogen Poots co-star.

Perhaps the most promising project Paul has in the works is Ridley Scott‘s biblical epic “Exodus,” in which Christian Bale takes the lead as Moses. Paul is playing Joshua, the Hebrew slave who led Jews to the promised land, alongside Moses. Joel Edgerton, Sigourney Weaver, Ben Kingsley and John Turturro are also included in the strong supporting cast.

Anna Gunn, the Emmy-winning actress who played Walter White’s wife, Skyler, hasn’t found her next big project yet. The former “Deadwood” star scored the lead in Bravo pilot “Rita” earlier this year, but the network ended up passing on the drama about a private-school teacher struggling to balance her professional and personal life.

RJ Mitte, the actor who played Walter White, Jr., is also off to a slow start in his post-“Breaking Bad” career. So far, he’s only lined up one movie — an action movie called “The Devil’s Ink.”

Dean Norris, who played doomed DEA agent Hank Schrader, moved on to another hit series before “Breaking Bad” even ended. Norris plays James “Big Jim” Rennie on CBS’ “Under the Dome,” which returned for a second season earlier this month. He’ll also be seen in Ridley Scott’s “The Counselor” this fall, and has a role in “24” co-creator Joel Surnow’s feature-film directorial debut, “Small Time,” which is set for a spring 2014 release.

“Breaking Bad” mastermind Vince Gilligan is one of the biggest breakout stars of the series, and has two more in the works.