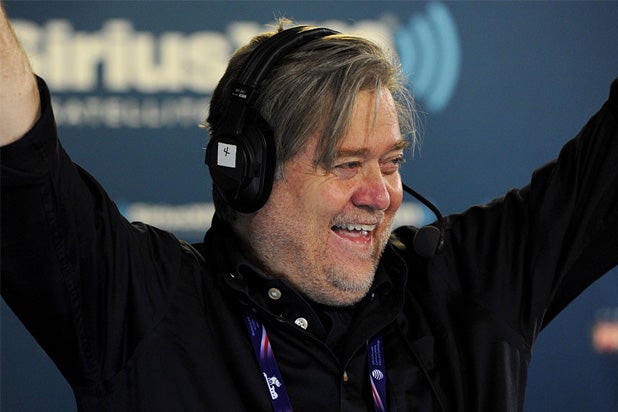 Now that Steve Bannon has made the jump from Breitbart executive chair to Donald Trump’s right hand man, people are trying to find out everything they can about him. Well, it turns out that before Bannon jumped into far-right media, he had a stint as a filmmaker and financier in showbiz, writing and pitching projects to Hollywood’s power brokers.

Bannon owes a great deal of his wealth to negotiating Ted Turner’s sale of Castle Rock Entertainment to Westinghouse Electric, according to a report by Quartz’s Ashley Rodriguez. To show Westinghouse his confidence that the deal would pay off, Bannon agreed to waive part of his adviser’s fee in exchange for a stake in five shows Castle Rock was working on at the time. One of those shows was “Seinfeld,” and when it hit syndication, Bannon had struck it rich.

But Bannon’s attempts to make his own films are more indicative of his far-right and nationalist tendencies, and some of the projects that never saw the light of day are truly bizarre. While some of his released films, which include positive documentaries focused on Ronald Reagan and Sarah Palin and an anti-Clinton doc called “Clinton Cash,” have the conservative stance one would expect of a Breitbart exec, he also outlined a script for a psuedo-documentary called “The Singularity” that targeted genetic science. Though he never got past the outline, the film’s thesis was that scientists were leading the world to ruin by trying to perfect human genetics through cloning and were tampering with the natural order dictated by God.

Bannon had some weird plans for some remixes of Shakespeare as well. In 1999, Anthony Hopkins and Jessica Lange starred in an adaptation of Shakespeare’s most violent play, “Titus Andronicus,” which got good reviews from the critics but bombed at the box office. Bannon got an executive producer credit on that film. But one can only imagine what we would have seen if he had gotten his away. His original pitch, as reported by the Paris Review, was “Titus Andronicus” in space.

The Rodney King riots in Los Angeles also inspired Bannon to try to turn Shakespeare’s “Coriolanus” into a hip-hop gang war, according to The New York Times. In “Coriolanus,” a Roman general seeks revenge on his homeland after he’s kicked off his throne by the people. Bannon wanted to take this concept and put it on the streets of L.A., with a script defined by a disjointed mix of Shakespearean English and 1990s slang. But just like “Titus,” Bannon’s script gives the titular protagonist lots of time to show off what a macho fighter he is.

But perhaps the abandoned project most pertinent to Bannon’s new job is “The Islamic States of America,” a mockumentary that shows life in an imagined America ruled by Sharia law. “Old Glory ﬂuttering from its ﬂagpole on the capitol’s portico looks different, but we can’t put our ﬁnger on it,” the first page of the script reads. “As we pull in we see why… Instead of the stars and stripes — the crescent and the star!!!”

The film goes on to warn viewers about those who are supposedly responsible for allowing Islam to slowly take over America. Now, with a spot in the White House, Bannon is being identified in news reports as one of the major architects of Donald Trump’s travel ban, which just had a stay against it upheld by the U.S. Ninth Circuit Court of Appeals.