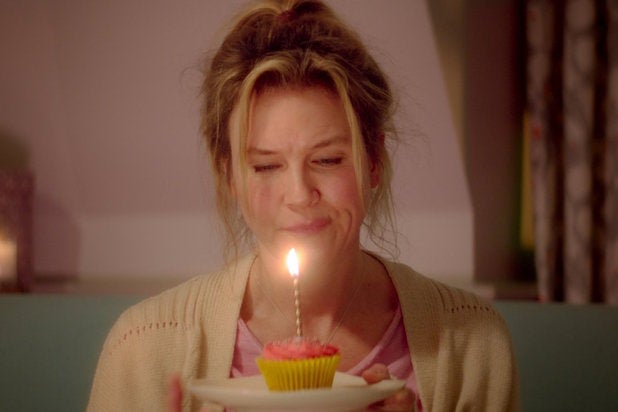 Lovable, accident-prone Brit, Bridget Jones, trying to figure out who fathered her unborn child is a return to the charm of the original “Bridget Jones’s Diary” — and away from the silliness of 2004 sequel “Edge of Reason.”

“Bridget Jones’s Baby” received a solid 83 percent on Rotten Tomatoes as most critics found Renée Zellweger‘s 12-year hiatus from the role based on Helen Fielding’s novels didn’t stop her from returning in a blaze of glory — and raucous laughter.

The third film in the “Bridget Jones” franchise follows Jones as she becomes pregnant after having consecutive one night stands with her ex-lover, Mark Darcy (Colin Firth), and the new charming man she just met, Jack (Patrick Dempsey). Consequently, she becomes entrapped with trying to figure out who the father of her child is.

The absence of Hugh Grant in the latest film is easily dismissed when viewers got a glimpse of Emma Thompson, who appears to be the true star of the film. She plays the role of Bridget’s hilarious doctor, and also co-wrote the script.

“The real stand-out is Emma Thompson who wrote and created her own part as Bridget’s doctor and shamelessly steals every single scene with a wonderful collection of one-liners,” wrote Empire Magazine‘s Terri White.

Read seven of the best reviews below.

Time Out, Cath Clarke
“Smartly, and without banging on about it, the script acknowledges that Bridge obsessing about calories and the size of her arse is a bit, well, ’90s. And the love story isn’t about the blokes, but the baby brewing inside her. I’ve never liked Renée Zellweger more as a warmer and wiser Bridget Jones — but still capable of making a total prat of herself.”

Village Voice, Serena Donadoni
“Director Sharon Maguire expertly handles the humor (intricate misunderstandings, exquisite slapstick), but her greatest strength is establishing a balance: ‘Bridget Jones’s Baby’ is a romantic comedy that’s truly both. There’s no filler in its 122 minutes, which allows the characters breathing room to consider their choices.”

Radio Times, Stella Papamichael
“Emma Thompson tickles the ribs as Bridget’s doctor, who wearily plays along when the expectant mother brings Darcy and Qwant to alternate appointments, too cowardly to tell one about the other. Thompson also co-wrote the script with Fielding and Dan Mazer (Sacha Baron Cohen‘s frequent collaborator since Ali G) and together they trump the Edge of Reason with a sassier, more satisfying mix of dry wit and knockabout comedy. Apart from Bridget’s obvious dilemma, they draw on her insecurities about balancing motherhood with a career and ageing in an industry that prizes youth — and YouTube — above experience.”

Empire Magazine, Terri White
“The real stand-out is Emma Thompson who wrote and created her own part as Bridget’s doctor and shamelessly steals every single scene with a wonderful collection of one-liners (most memorably advising the expectant fathers to leave the delivery room as her ‘ex-husband described it as watching his favourite pub burn down’).”

The Guardian, Peter Bradshaw
“This is a better Bridget than the last movie, ‘The Edge of Reason,’ because it doesn’t feel the need to indulge shark-jumping setpieces like zipping off to Thailand. We stick in her old London manor of Borough and she’s still in the same old scuzzy flat, still working for a cable TV news company, where she has now improbably become a producer.”

Daily Telegraph, Tim Robey
“Zellweger feels back in charge of the character again, and even her excesses are easily indulged, after the tonally hideous detour of 2004’s ‘The Edge of Reason.'” There’s especially bright fun to be had with Sarah Solemani, playing the anchorwoman of a TV news show Bridget keeps accidentally sabotaging in a producing capacity. These scenes pop plentifully.”

The Times, Kate Muir
“I’ll try to keep spoilers to a minimum, but true fans of Helen Fielding’s novels should just stop reading now and buy tickets for a girls’ night out to the cinema.”