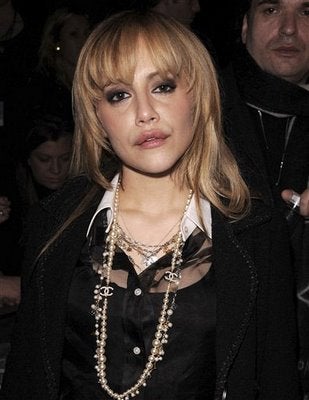 Toxicology reports detailing the exact nature of the drugs found in Murphy’s system have still not been released, but results from an autopsy were announced on Thursday.

Craig R. Harvey, the coroner’s department chief investigator, told TheWrap that "a list of all the specific drugs" found in Murphy’s system "will be released when the full report is issued in two weeks." Nor would Harvey elaborate on the nature of the "drug intake" that is listed as how Murphy’s "injury" occurred.

Community acquired pneumonia is defined as a lung infection when it is acquired by people who have not been recently hospitalized.

The report had been expected to come out next week or later. Still it was somewhat surprising that the coroner’s office had issued such a stark release, providing few details about the star’s death.

The conclusion that Murphy’s death wasn’t simply the unfortunate result of a frail constitution giving out now seems inescapable.

“They see drugs as the reason for her death,” says Dr. Charles Sophy of the coroner’s findings. Sophy is the medical director for the county’s Department of Children and Family Services and an author (“Side By Side”) with extensive experience dealing with celebrity addicts.

“They’re saying that somehow it was something that shouldn’t have happened — it was not natural,” he adds. “The questions that the [full report] will have to answer are about what kind of drugs these were, and did the level of her prescription drugs become toxic to someone whose resistance was lowered through anemia.”

In an odd coincidence, the brief summary on the findings on the causes of Murphy’s death was released on the same day that the coroner’s office announced the causes of socialite party girl Casy Johnson’s January 5 death (Diabetic Ketoacidosis).

Last December, Murphy was found by her mother Sharon Murphy collapsed in the bathroom of the Los Angeles home she shared with her husband Simon Monjack.

The actress’ career had taken a downturn in recent years, as she appeared in increasingly low-profile projects and acquired a reputation for "erratic" on-set behavior.

She had been fired from the horror film “The Caller,” just two weeks before her death for undisclosed reasons.

As TheWrap previously reported an insider on the production of the independent-thriller,“Something Wicked,” said that Murphy was barely able to shoot her scenes and would lose her focus in mid-sentence during a take.

Murphy is best known for her roles in "8 MIle" and "Clueless" and also did voice work on the show "King of the Hill."

In the wake of Murphy’s death some media reports have focused on the behavior of Monjack, who has threatened – but not followed through with – a wrongful-death lawsuit against Warner Bros., claiming the stress of being released by the studio from “Happy Feet 2” directly led to his wife’s death. (Warner Bros. denies it had ever signed Murphy to the animated feature.)

Monjack and mother-in-law Sharon Murphy recently announced the creation of the Brittany Murphy Foundation, but so far all that exists of it is a Web site and a very general statement that the foundation is “dedicated to arts education for children.”

An apparent attempt to hold a launch party for the foundation at Beverly Hills’ Saban Theater Thursday fizzled when attention was drawn to the $1,000-a-head admission requested of attendees. Monjack reportedly pulled the plug on the gala by claiming to have come down, ironically, with pneumonia.

Monjack did not respond to interview requests Thursday.

The Los Angeles County Department of Coroner conducted an autopsy on the body of Brittany Anne Murphy-Monjack, age 32, on December 21, 2009.

The cause of death has been determined as:

MANNER OF DEATH: ACCIDENT
It is anticipated that the autopsy report will be available within two (2) weeks.