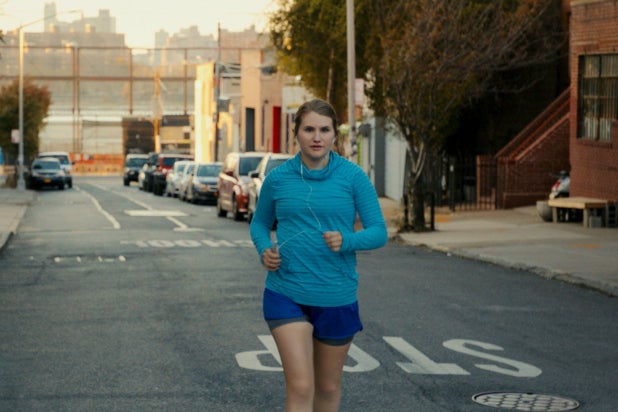 It’s no surprise that the most interesting aspect of “Brittany Runs a Marathon” is right there in the title. But it’s a little disappointing to find that the least interesting element is, too. Had writer-director Paul Downs Colaizzo focused purely on Brittany herself, he might have made a minor indie classic. But when he turns his attention to that marathon, he gets pulled too far off track.

If Brittany is the best thing about this movie, it’s because she’s played by Jillian Bell, who is swiftly becoming indispensable. After lots of eye-catching supporting or ensemble roles (“Workaholics,” “22 Jump Street”), she’s landed a showcase. And she’s more than ready to make the most of it.

When we first meet Brittany, she’s delightfully relatable. Which is to say: she’s a grumpy, broke, insecure, perennially hungover millennial, and so determined to score some Adderall that she’s scheduled her first doctor’s appointment in years. He’s got her number, so she doesn’t get the drugs. But he does offer some life-changing advice: she’s blatantly unhealthy and ought to lose 50 pounds.

A shocked Brittany complains mightily — “I think you missed the point of those Dove ads,” she grumbles — but after catching sight of her body, and comparing herself one too many times to her tiny roommate (Alice Lee, stuck in a lousy role), she decides to make a change.

She starts, as journeys must, with a single step. But then her neighbor Catherine (Michaela Watkins) invites her to join a runner’s group, and she finds another friend in the equally-out-of-shape Seth (Micah Stock, “Bonding”). Together, the trio agrees to spend a year training for the next New York City Marathon. Meanwhile, Brittany’s physical transformation parallels her emotional one. She drops toxic relationships and picks up healthy ones. She finds a new job, which leads to the ultimate New York living situation, which includes an intriguing roommate in the cranky-cute Jern (Utkarsh Ambudkar, “The Mindy Project”).

But while all journeys begin the same way, few follow the same straight path. And though Brittany aces both training and life for a while, she soon hits some roadblocks that threaten to derail her newfound confidence. Actually, that is a pretty straight path, as movie arcs go.

To some degree, thoughtful casting transcends the script’s increasing predictability. Ambudkar, for example, is such a charmer that we’re rooting for him and Brittany from the first second of their meet-cute. Watkins and Lil Rel Howery (as Brittany’s brother-in-law) turn smaller supporting roles into main attractions; you might find yourself wishing you could see their characters’ movies, too.

Playwright Colaizzo also shows impressive skills as a first-time screenwriter and director. The movie looks great, balancing New York’s grit and beauty in a way that suits a feel-good comedy. The script is stocked with amusing one-liners, and there are just enough caustic observations to keep viewers nodding in agreement.

But it’s a definite letdown to be jogging alongside our delightfully individual heroine, only to realize she’s becoming lost in the herd. Despite a third-act sop to healthy living and modern, be-true-to-yourself mores, the movie spends an uncomfortable amount of time placing Brittany on scales or in front of mirrors, and admiring her newly-toned physique as she switches from baggy sweats to form-fitting running shorts. (The press notes clarify that Bell lost 40 pounds during shooting.) What starts out feeling inspirational threatens, at some points, to tip into disheartening conformity.

Bell’s performance is strong enough to override these weaknesses, but it’s hard to watch this film and not think of another recent independent comedy: “Sword of Trust,” which also stars Bell and Watkins, gives both women the chance to portray completely different but equally compelling characters. The crucial distinction is that the latter film zig-zags cheerfully from beginning to end, staying thrillingly true to its weirdo instincts.

Why not see them both? And what the hell, it’s summer. Make a marathon of it.