Brittney Griner was sentenced to nine years in a Russian penal colony Thursday for “smuggling” and storing cannabis oil, sending U.S. politicians, sports journalists and others into a frenzy of heated reaction to the “unacceptable” punishment handed down by the foreign court.

“Anyone who can look at Brittney on the screen and not see the humanity and severity of this situation is sick,” Bleacher Report host Arielle Chambers tweeted, adding that “Brittney Griner should be on US soil. BRING HER TF HOME.”

The Phoenix Mercury player has been in Russian custody since February, when she was detained at Moscow’s Sheremetyevo airport with vape cartridges that contained cannabis oil, which is banned in the country. The WNBA champion pleaded guilty on drug charges in July, but maintains she did not intend to break the law. 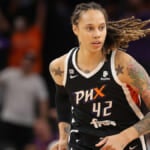 President Joe Biden called the decision “unacceptable” in a statement obtained by ABC News, calling on Russia to “release her immediately so she can be with her wife, loved ones, friends, and teammates.”

Biden has been in contact with Griner’s wife, Cherelle Griner, after the WNBA star wrote the president a handwritten letter asking him to not “forget about [her] and the other American detainees.” News outlets have speculated that Griner could be exchanged for Russian arms dealer Viktor Bout.

Negotiations for such a swap could not begin in earnest, however, until Griner’s sentence was finalized. But even if that outcome were to come to pass, many believe a grave injustice has already been done.

Sports journalist Taylor Rooks shared her disappointment at the decision, tweeting “It’s day 168. even one more day there is too much.”