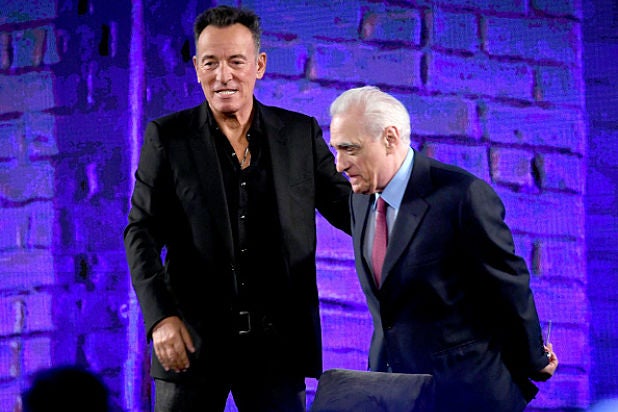 Bruce Springsteen was partway through his introduction to “Dancing in the Dark” on Sunday night at the kickoff event to Netflix’s Emmy campaign space when he acknowledged that he was in what was, for him, foreign territory.

In language taken from his acclaimed show, “Springsteen on Broadway,” Springsteen was talking about how he’d tried to keep the faith with his audience over the course of his career. And then he chuckled and added, “Despite the fact that I’m here f—ing begging complete strangers for their votes!”

Well, yes, he was: Springsteen’s appearance, which included performances of two songs, clips from the Netflix special taken from his Broadway show, and a lengthy conversation with Martin Scorsese, was designed to remind Emmy voters that “Springsteen on Broadway” will be eligible in several Emmy categories this year.

And it was the opening night for Netflix’s FYSee space at Raleigh Studios in Hollywood, where the company will stage events and conversations throughout May on behalf of its many Emmy contenders.

But a night with Springsteen and Scorsese was obviously something special. Their conversation rambled through film, music, inspiration, redemption and Catholicism, focusing on “Springsteen on Broadway,” but also including the news that even though Springsteen will release a solo album, “Western Stars,” next month, he’s written new material for his longtime group, the E Street Band, and envisions a tour.

“I spent about seven years without writing anything for the band,” said Springsteen, whose upcoming album was made with different musicians. “And then about a month ago, I wrote almost an album’s worth of material for the band.”

The writing, he said, came in a two-week burst. “I had … these little daily visitations,” he said. “And it makes you so happy: ‘I’m not f—ed! There will be another tour!'”

Of course, that tour could be well off, considering that the E Street Band album has yet to be recorded and Springsteen has been known to sit on material for years. So Sunday focused on “Springsteen on Broadway,” director Thom Zimny’s document of the Broadway show that ran for more than a year before ending last December on the same day that the Netflix special aired.

The program, which took place before an audience of Emmy voters and guests, began with a screening of a 45-minute section from the second half of the special, including the songs “Tenth Avenue Freeze-Out,” with its lengthy spoken tribute to his late saxophone player, Clarence Clemons; “Tougher Than the Rest” and “Brilliant Disguise” with Springsteen’s wife, Patti Scialfa; “Long Time Coming,” a song that showcases a touching story about Springsteen’s father, and one that was added to the Broadway show for the Netflix taping; and “The Ghost of Tom Joad” and “The Rising,” the moment in the show in which Springsteen gets political and decries the ugliness he sees in today’s America.

Then an admittedly nervous Netflix chief content officer, Ted Sarandos, introduced Springsteen and Scorsese, who rambled through a low-key conversation about their work.

The two, who first met in 1975 when Scorsese and Robert De Niro caught Springsteen shows in New York and Los Angeles, found lots of common ground: Scorsese mentioned the line “they wind up wounded, not even dead” from Springsteen’s song “Jungleland,” and Springsteen quickly said, “That was ‘Mean Streets.'”

And one element of Scorsese’s work clearly impacted Springsteen. “The influence of Catholicism, for an altar boy like myself, it was deadly,” he said.

The two also talked about their mutual affinity for writer Flannery O’Connor, and their attraction to the darker side in their work.

“If you’re an artist, that darkness is always more interesting than the light,” Springsteen said. “I wanted to base my work on the dark side of things, so you have to earn the light. And the artists that are interesting to me — Hank Williams, Elvis, Bob Dylan, Marty Scorsese — you see it and think, ‘What’s bothering that guy?'”

“A lot,” Scorsese said with a laugh.

Springsteen and Scorsese also made connections between “Springsteen on Broadway” and Scorsese’s concert film, “The Last Waltz,” a document of the Band’s 1976 farewell concert in San Francisco in which the cameras never focused on the audience.

“I said, ‘We have seen enough of the audience in “Woodstock” — what if we just stay on the stage?'” Scorsese said of his attitude going into “The Last Waltz.” “What’s it like to be part of the band?”

Springsteen said the plan for the filming of “Springsteen on Broadway” was to never show the audience, to the point where the special’s original braintrust — himself, Zimny and manager Jon Landau — originally considered not only never showing the audience, but filming the show without one, in an empty theater.

Instead, the special was shot over two nights, though Springsteen said he was far too conscious of the cameras on the first night and had to tell himself to up his game on the second night.

“You’ve got to make your internal life available,” he said of his goal in the show. “And you’ve got to look into the camera, which is unforgiving and frightening.

“As long as you’re making your emotional inner life available, it’s watchable,” he added. “Because that’s death-defying. But if you don’t do that, it’s an old guy with an acoustic guitar — that’s the show, ladies and gentlemen.”

At the end of the conversation, Scorsese left but Springsteen stuck around, grabbing a guitar and performing a section of the Broadway show that includes the songs “Dancing in the Dark” and “Land of Hope and Dreams.”

As a way to beg for votes, let’s just say that it was pretty damn effective.