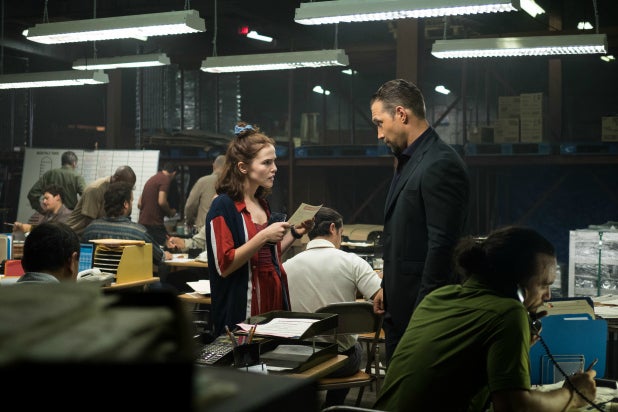 “Haven’t you ever dreamed of something more?” That’s the question our down-and-out protagonist asks in “Buffaloed,” but it also comes to mind as we wait for Tanya Wexler’s uneven comedy to fulfill its potential.

Young Peg Dahl (Zoey Deutch) should be among Buffalo’s most promising citizens; she begins the film as a brilliant student with a laser focus and Wall Street goals. But the system is solidly stacked against her, and she can’t afford to go to college. She has to find another route to success, and her chosen approach — selling counterfeit Bills tickets — instead lands her in jail.

Facing few other options on release, she takes a job with the city’s sleaziest con-man, Wizz (Jai Courtney). Wizz runs a brazenly loathsome debt-collection agency, and Peg soon becomes his top collector. In fact, it’s so easy to shake down firefighters and new mothers and grandmas suffering from dementia that she realizes she’s wasting her talents working for someone else.

So off she goes on her own, stealing Wizz’s leads and collecting her own staff from experienced salespeople: former prostitutes, Bible salesmen, and fellow grifters. But she hasn’t really thought this plan through, so eventually she winds up on the wrong side of, well, everything and everyone: Her staff feels betrayed when she can’t pay them, Wizz is out for blood after she challenges his status, a local prosecutor (Jermaine Fowler, “Sorry to Bother You”) is wondering what she’s up to, and her exhausted single mom (Judy Greer) and easygoing brother (Noah Reid, “Schitt’s Creek”) pay a huge price for trying to bail her out.

But the inconvenient truth is that Deutch doesn’t play Peg as a strong or complex woman: Her broad approach turns Peg into an unscrupulous narcissist who uses or betrays anyone in her path, actively invites every disaster that happens to her over the course of the movie, and dismisses every disaster she blithely causes for others.

The real problem is that no one involved seems to realize that their heroine is, in fact, an antiheroine. Had the movie gone all-in on Peg’s amorality, we might have had a more interesting project. Had Peg shown some nuanced vulnerability or awareness, we might have had a more likable one. Instead, her self-centered attempts to charm everyone, including the audience, read not as beguiling but simply sour. And because Deutch sacrifices any subtlety to pump Peg so full of Buffalo-accented attitude, this brassy character’s obligatory, 11th-hour awakening feels flatly false.

What’s more disappointing still is the fact that Peg’s huge persona leaves little space for anyone else. So it’s not just the characters but the actors who sacrifice themselves, simply because Peg takes up all the air in a room. Which is a particular shame when the first-rate supporting cast includes Greer, Reid, and Fowler, all immensely likable performers who could have brought more layers to the story.

Still, Wexler is a confident filmmaker, and her passion and sense of humor flash throughout. She pulls us in with fun, well-crafted montages backed by a nicely-considered soundtrack overseen by Melany Mitchell. Then she makes the most of her “Big Short”-style lectures and bleak setting (shot with appropriate chill by Guy Godfree, “Maudie”) to hit us hard with the grim reality of suffocating debt and job stagnation. There’s never a moment when we forget that this subject matters to her, deeply.

Indeed it’s Wexler, in the end, who could be considered the movie’s hero: she has a righteous cause, she fights for it against considerable odds, and — unlike Peg — she earns the passionate plea with which she sends us back out into the cold world.