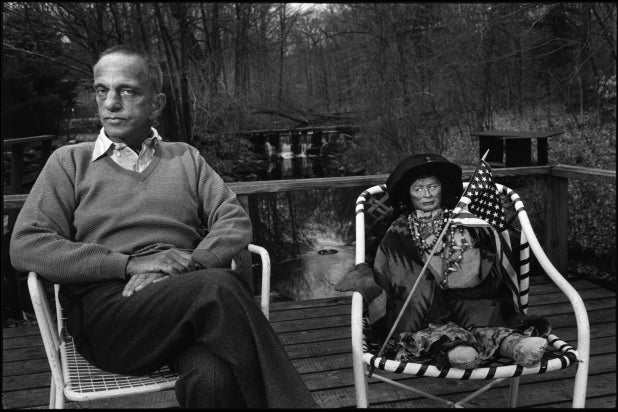 The amoral legacy of closeted gay political operator Roy Cohn has come back to life in two films of the moment: Matt Tyrnauer’s “Where’s My Roy Cohn?” and now this more personal documentary directed by Ivy Meeropol, granddaughter of Julius and Ethel Rosenberg, who were prosecuted by Cohn and executed for treason in 1953.

Meeropol previously covered the story of her grandparents in her 2004 documentary “Heir to an Execution,” and she sketches out the basics of the case against them at the beginning of her film on Cohn, starting off with footage of herself as a girl talking to her father about what happened to Julius and Ethel. She then cuts to footage of Cohn, who always signals, “I am evil” for the camera, as if he were very conscious of the part he was trying to play.

“The Story of Roy Cohn” tries to establish a balance between Cohn and the Rosenberg family, but this is shaky from the start. Meeropol returns to her family history and jumps between a very brief explanation of communism in the United States (and its basis in the anti-Nazism of the 1930s) and interviews with Tony Kushner and Nathan Lane about the way Kushner wrote the Cohn character for his play “Angels in America.” The structure here is haphazard, to say the least, and there is a serious lack of concentration and follow-through. Too much ground is covered too quickly, and often confusingly.

Watch Video: 'Where's My Roy Cohn?' Director Explains How McCarthy's Counsel and Trump Are 'Cut From the Same Cloth'

It is unsurprising that Meeropol would lack the objective distance needed to deal with the part of this story that is personal to her, but her attempt midway through the film to contrast her father’s taste for folk music with Cohn’s lust for the disco hits at Studio 54 backfires; the leftist sing-a-longs described here sound far less attractive than the hedonism at that club. Then again, the devil has the ability to assume pleasing shapes.

When she is not trying to set up a “good guy/bad guy” dynamic between Cohn and her father, Meeropol jumps all over the place, trying to cram in too many stories and pieces of information, many of which lead to dead ends. Some of these stories, of course, are fascinating even in short doses. But Meeropol fumbles the connection between Cohn and Donald Trump, telling us so little about their initial contact on a court case that you have to search online later for what actually happened.

The inconvenient fact for Meeropol is that her grandfather Julius was guilty of treason. Alan Dershowitz relates here that Cohn told him he “framed guilty people” in the Rosenberg case. This movie asserts that Ethel was entirely innocent (which is debatable) and that she was framed so that Julius would out some of his comrades. Julius refused to do this, and so Ethel was executed along with him. This is morally messy in a way that does not lend itself to the easier answers Meeropol would understandably prefer.

Cohn was a Shakespearean character like Richard III: His hand was in so many dirty deals of the last century, and there are so many ironies involved in these stories, that they clearly need their own movies, or their own episodes in a series. He is such an intriguing and also obvious camera subject that it is possible to trace the panicked way he reacts during the HUAC hearings in the 1950s when “fairies” are derisively mentioned to the same flare of panic in his would-be cold eyes when he denied on television in the 1980s that he had HIV. For all his reputation as a master manipulator, Cohn had various “tells” in his behavior that signaled his insecurity: a tightening of the mouth, a wincing urge to squirm away.

The somewhat awkward full title of this movie comes from the panel that Cohn was given on the AIDS Memorial Quilt, which Meeropol and her father saw right away when they visited it. The temptation with Cohn is to see him as he presented himself, as some kind of villain who had supernatural staying power even from beyond the grave. Yet when we hear him speak about dying in the last part of this movie, he says that some people will see him as an “S.O.B.” and some people will see him as “a tough fighter and a good guy.”

Did Cohn actually see himself as a tough fighter and a good guy? Maybe in his most confident moments. But even though he told so many lies with such boldness, Cohn could not shield himself from certain truths, which is why he is, finally, more a character for a dramatist like Tony Kushner than for a documentarian.