So now the pieces are in place. The Oscar producers have chosen their hosts, Steve Martin and Alec Baldwin. Ricky Gervais can do a killer job at the Golden Globes and wonder if the Academy will take note. Neil Patrick Harris can make a couple of movies and try to burnish his film credentials. Hugh Jackman can take February off, if he wants.

And while the choice of Martin and Baldwin has brought near-unanimous praise to Oscar producers Bill Mechanic and Adam Shankman, it also raises some questions. So I’m going to ask the questions … and answer them, more or less. 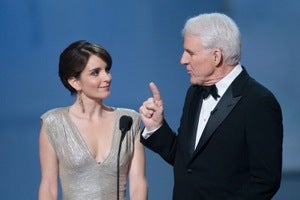 Steve Martin and Alec Baldwin – does this mean no singing and dancing?
Well, one of the show’s producers is a judge on “So You Think You Can Dance” who was lauded in the initial press release for his choreography skills. You do the math. Of course there’s going to be singing and dancing. They wouldn’t have hired the guy otherwise.  (Shankman suggested otherwise in an interview with Entertainment Weekly, but we all know he’s going to indulge his terpsichorean side at some point.)

What I think we’ll see, though, is less singing and dancing from the hosts, and more from outside pros. (Even Jackman got help from the likes of Beyonce last year.) Some of us (me, for instance) might welcome an Oscar show without any extraneous musical numbers, but this isn’t the year for that. Just don’t expect much of it from the hosts.

Although Martin might well undertake a step or two. And Baldwin – well, if it’s in the service of a joke, why not?

These two guys have an average age of 57 and a half!  Whatever happened to chasing the hip, young audience?
C’mon, we’re talking about the Oscars here. They’ll book Miley Cyrus as a presenter, but dignity is important to this group. They’re going to spend years trying to bump up the ratings by adding more best-picture nominees and tinkering with the format before they’ll do anything really drastic.

Ideally, it’ll be a deadpan, dry rapport that will play off the venality of Hollywood – the starting point for every one of Martin’s jokes during his previous Oscar hosting gigs, as well as the basis for Baldwin’s character on “30 Rock.”

I’m sure we’ll see Martin and Baldwin separately at times, but I’m betting the show opens with a duet, not a solo.

Speaking of “30 Rock,” isn’t Alec Baldwin more of a TV star than a movie star these days?
Yes. And so was Jon Stewart, and Ellen DeGeneres, and Chris Rock, and David Letterman, and Johnny Carson. It’s hard work finding a movie star who wants this gig. And, you know, Baldwin has been a movie star before. And maybe he will be again. After all, he’s got “It’s Complicated” coming out in December.

Since you brought up “It’s Complicated,” doesn’t this pairing look an awful lot like an ad for that movie?
Sort of, sure. And when you figure that the movie’s star, Meryl Streep, is bound to be sitting in the front row – well, yeah, it may occasionally play like a plug … for a movie that will no longer be in theaters and won’t have come out on video yet. In my book, that’s no harm, no foul.

But will this influence that film’s Oscar chances?
It’s not going to hurt. It might get a few more Academy members to watch the movie, which could help. A friend who saw an early research screening says it’s absolutely terrific, though it didn’t strike him as an Oscar kind of movie. If the voters decide that it is an Oscar movie after all, I have to think it’ll have more to do with Meryl (and Nancy Meyers) than with the two Oscar hosts in supporting roles.

Anyway, whatever plugs that movie gets certainly won’t be as blatant as Billy Crystal riding onstage on a horse to promote “City Slickers.”

Isn’t the show going to be really long, since they’ll have those clips from all 10 of the best picture nominees?
A lot of people seem to have forgotten, but they dropped those film clips a couple of years ago, when it got useless to try to find scenes that hadn’t already been seen a thousand times on entertainment shows and YouTube.

That said, the Oscars are always long, and two hosts will require more time than one.

Bottom line: good choice, or not?
Good choice. The Oscars should not try to be the Emmys or the Tonys or the Indie Spirit Awards or, heaven forbid, the Golden Globes. They should be a little classy – maybe even a little staid, considering the alternative. Their humor should be smart and dry, not loud and sweaty.

I think that’s what they’ll get with Martin and Baldwin.