The Academy’s acccountants at PwC have promised that they are investigating the Oscars envelope flub to determine “how this could have happened.”

In the meantime, we’ve done our own investigation, and found a few answers.

Who gave Warren Beatty the Best Actress envelope instead of the Best Picture envelope?
According to an Oscar stagehand who witnessed the incident, it was PwC balloting leader Brian Cullinan, the senior member of the team that also includes Martha Ruiz.

But if the Best Actress category had already been handed out, why did he still have that envelope to give to Beatty?
The PwC team comes to the Oscars with two complete sets of envelopes. Cullinan had one set in the stage-right wings, from which most of the presenters enter the stage. Ruiz had another set stage left. The Best Actress envelope that presenter Leonardo DiCaprio opened must have come from Ruiz’s stack, leaving the other actress envelope in Cullinan’s stack.

Why didn’t Cullinan realize that he was giving Beatty an envelope to the wrong category?
First, this year’s envelopes were much harder to read than the ones used in previous years, with gold lettering against a red background. Second, Beatty and Dunaway’s entrance to the stage was itself chaotic, according to witnesses.

“Handling Warren and Faye is like herding cats,” the stagehand told TheWrap. During the two-minute commercial before the Best Picture award was to be handed out, Beatty wandered out to the restroom just off the Dolby Theatre stage. A stage manager ran out there to get him, and then took Beatty and Dunaway through the wings, where Cullinan handed Beatty the envelope as he rushed by.

The two presenters reached their place on the stage with “five seconds to spare,” according to staffer.

When the wrong winner was announced, who knew an error had been made?
Cullinan and Ruiz both came to the Oscars with all the winners memorized, and with a standing order to immediately correct any errors that might be made. Presumably, they both knew that “Moonlight” was the real best picture winner as soon as Faye Dunaway said, “La La Land.”

So why didn’t they step in and correct the error immediately?
Good question. According to the Oscar stagehand, Cullinan asked a stage manager in the stage-right wings to have lead stage manager Gary Natoli, who is typically stationed stage left, check with Ruiz. But Natoli was in the audience with host Jimmy Kimmel, who was planning to end the show sitting next to his make-believe nemesis Matt Damon. Natoli had to run to the wings to find Ruiz and confirm with her that “Moonlight” was indeed the winner.

Is it true that Cullinan was tweeting star photos during the Oscars?
Well, you wouldn’t know it from his Twitter account currently, because its tweets end after Sunday afternoon. But at least one screencap has survived of an Emma Stone photo tweeted by Cullinan, and other Twitter users have upbraided him for what they described as a series of celebrity tweets during the show. 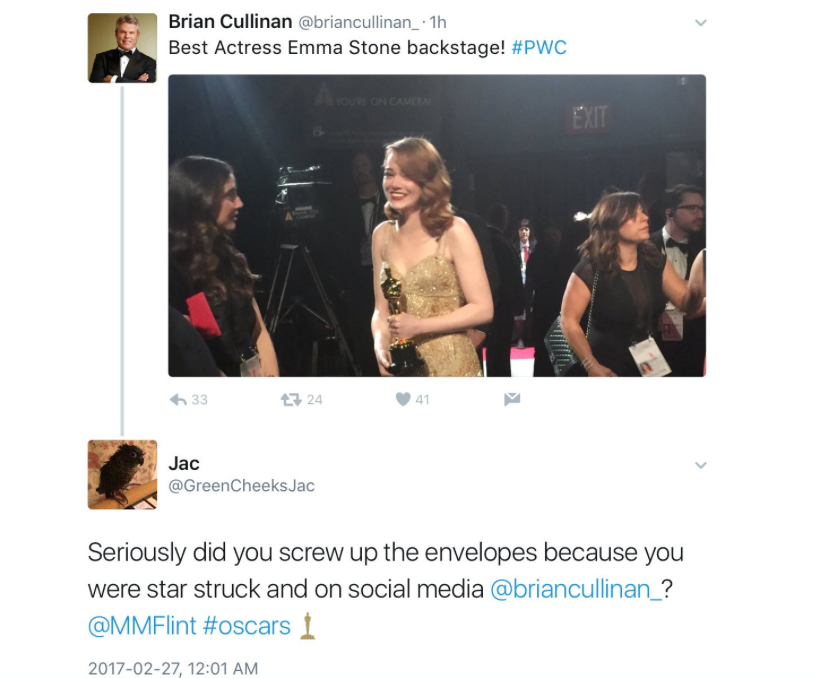 The seven years of combined experience is small for PwC, whose balloting leaders typically stay on the job for 10 years or more.

When will PwC complete its investigation?
The company hasn’t released a timeline, though it doesn’t seem too hard to figure out what happened and who was at fault.

Watch video of the mixup inside the ceremony, above.

"La La Land" being announced as the wrong Best Picture Winner wasn't the only big news of Oscars night.