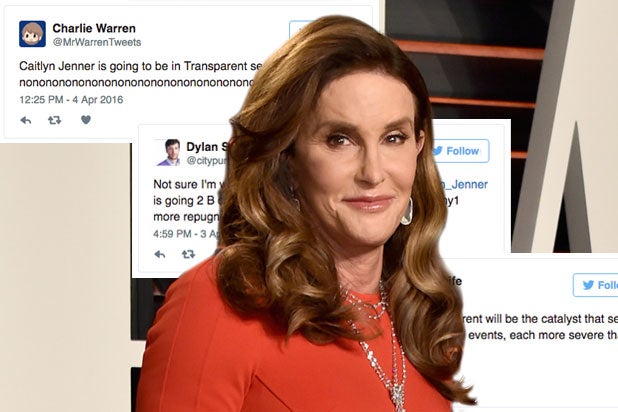 “Transparent” creator Jill Soloway confirmed over the weekend that Caitlyn Jenner will appear on Season 3 of the critically acclaimed Amazon series, and the reaction from fans on social media has been less than positive.

To some viewers, the addition of Jenner is a step backward for a show that has been hailed as an important step for trans representation in mainstream media.

“Caitlyn Jenner is a republican and a harmful, disgusting problem to the LGBT community. How dare you feature her on Transparent,” one Twitter user wrote on Sunday.

Also Read: Candis Cayne on Caitlyn Jenner: 'Is She a Perfect Spokesperson? No'

Still, series creator Jill Soloway called the casting “a dream come true” in an interview with the Associated Press at Saturday’s GLAAD Media Awards, where her show took home the award for outstanding comedy series.

“We are all part of the same community. A lot of the transwomen who work on our show are also in her [E! docu-series], ‘I Am Cait,'” Soloway said. “Lots of crossover. Lots of friends.”

Following her coming out last year, Jenner has received some criticism from the transgender community, many members of which view her as a poor spokesperson and activist. In recent months, she has drawn fire for supporting Republican presidential candidate Ted Cruz and for saying that a Donald Trump presidency “would be very good for women’s issues.”

“Caitlyn has eroded a lot of the enthusiasm that the LGBT community at large had for her as she was coming out,” LGBT activist Danielle Moodie-Mills told TheWrap last month. “I find it very disappointing that through ‘I Am Cait’ and her conversations with less advantaged trans people there hasn’t been a cultural shift in her understanding of the movement.”

The fuck? Transparent, you were already problematic enough, why you gotta bring Caitlyn Jenner into the mix? I'm done.

Caitlyn Jenner joining Transparent will be the catalyst that sets in motion 100 years of dreadful events, each more severe than the last,

Not sure I'm willing 2 watch @transparent_tv if @Caitlyn_Jenner is going 2 B on. Bad move @jillsoloway. Could U pick any1 more repugnant?

@jillsoloway Caitlyn Jenner is a republican and a harmful, disgusting problem to the LGBT community. How dare you feature her on Transparent

@transparent_tv Why would you have @Caitlyn_Jenner , the most clueless & entitled trans person on the show? You lost me, won't be watching.