Caleb Landry Jones’ Brother Told Him to Take ‘The Outpost’ Role: ‘You’re Doing This One’

TheWrap magazine: Jones recounts how his brother, an ex-Marine and combat veteran, read the script to Rod Lurie’s immersive Afghanistan drama and made the choice for him

A version of this story about Caleb Landry Jones first appeared in the Race Begins issue of TheWrap’s awards magazine.

Rod Lurie’s harrowing and heartfelt combat film “The Outpost” is full of buff actors like Scott Eastwood and Orlando Bloom playing real-life members of the U.S. military – but it’s the slightest, most timid-looking actor of the bunch, Caleb Landry Jones, who gives us the immersive film’s everyman hero. As U.S. Army Specialist Ty Carter, makes us feel the terror of a harrowing Taliban attack but also the drive to save countless others while himself injured.

He took the role, he said, largely because of his brother, who is himself a wounded combat veteran. “My agent sent me the script and I was taking a long time to read it,” he told TheWrap. “Sometimes I’m not great at reading material. But my brother was in town, and he’s an ex-Marine, so I asked him to read it before I even looked at it to see what he thought.” His brother, who’d met Medal of Honor winner Carter at a veterans’ event, was succinct: “He read it and said, ‘Oh, you’re doing this one.’ I said, ‘That good, is it?’ And he said, ‘You’re doing it.’ That’s all he said.” 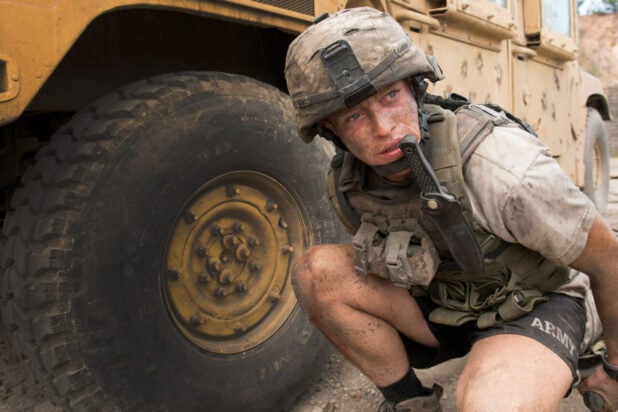 While preparing for the role, Jones met Carter, who won the Medal of Honor for his actions during the 2009 Battle of Kamdesh in Afghanistan, which is depicted in the film. The two spent time together in Texas, where they both live, and Carter was also on the set for part of the shoot in Bulgaria, playing a small role in the movie.

“It’s a strange one, playing a real person when they’re there,” Jones said. “It was important to me to get some of his feelings — how scared he was at different times, what certain actions would mean mentally — but at some point I had to forget that I was playing a person I could literally look over and see.”

Also Read: Rod Lurie on 'The Outpost': 'I Will Never, Ever Do Anything as Important as This'

Still, he was happy that Carter didn’t arrive on the set until shooting had been going on for a while, and neither did Jones’ brother. “I had a few weeks before they got there,” he said. “So we went into it without them being there. And then when they came, it was too late to change a lot. But I did look at them after a take to say, ‘Does it look right in the eyes, or is it complete horses—?'”

Most of the final hour of the movie is taken up by the battle itself, in which hundreds of Taliban fighters attacked a small U.S. force trapped in a camp surrounded by mountains. The bulk of the combat sequence was shot in long, uninterrupted takes, requiring cameras to follow the actors through the carnage and chaos.

“It was probably much more complicated than it seemed to the actor,” Jones said with a laugh. “I don’t really know what went into making sure the camera got everything, I just know that from my perspective it felt no matter what happened, they’d get it on film. Even though there was a very precise set of movements to be made, it also felt pretty freeing at the same time.”

Asked about his biggest challenges in the role, Jones first mentioned the physical ones – “I’m not that athletic” – but then moved on to the fact that the film is an unflinching depiction of a battle in which eight young American soldiers lost their lives. “All of the scenes felt like there was a heaviness to them,” he said. “It never felt like, ‘Oh, that scene will be fun,’ or ‘That’s just a fart in the wind.’ Every scene had something tough about it, you know? I was frightened by them all.”