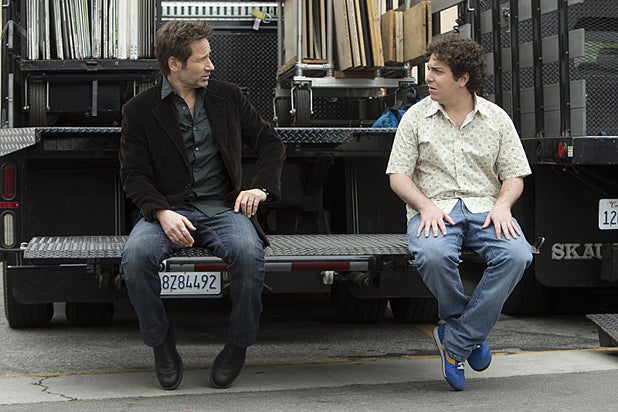 Since his scene-stealing performance in the found-footage teen comedy “Project X,” Oliver Cooper has shared the screen with Ben Affleck and Justin Timberlake in “Runner Runner” and starred in “Four Dogs,” an indie movie he co-wrote and produced. Cooper made such an impression on “Project X” producer Todd Phillips that the director gave him a small part in “The Hangover Part III.” He most recently wrapped Joe Dante’s horror comedy “Burying the Ex.”

Cooper’s comedic chops landed him an unlikely role as the son of David Duchovny and Heather Graham’s characters on the final season of Showtime’s “Californication.” Now that fans have had a chance to familiarize themselves with his socially awkward character Levon, Cooper spoke with TheWrap to discuss the series and how his career has taken off since “Project X” made him a relatable star.

So how’d you get the part? I imagine there was a lot of competition for this role.
It was a traditional audition. I went in there to meet with the casting director and there was a bunch of [kinda] fat kids that looked just like me. They didn’t tell us we were auditioning to play Hank’s son, they just said it was going to be a kid interviewing Hank for his newspaper and it’d be a possible eight-episode arc. That’s all they said.

So once you landed the part, did you get any advice from David about how to act like a Moody?
We had a thing at the end of the first episode where I tell him I’m his son and then he lights up a cigarette, so they asked me if I was OK smoking on the show. David directed the episode and he wanted to try a take where we both light up a cigarette at the same time. It didn’t work at all so we never used it. I thought it was out of character. This weird kid isn’t gonna smoke a cigarette.

How different do you think your character would be if he grew up with Hank as his father?
I think Levon would’ve been much cooler. Being around just his mother made him more weird. If he had been around Hank, I think he would’ve definitely been cooler and known how to talk to girls a little bit better.

This was your first TV show, right? How did you like it compared to film? Did it take a while to adjust to the fast-paced schedule and the rhythm of a TV series?
This was my first time and I almost enjoyed it more. It’s hard to get substantial parts as a young actor and the cool thing about TV is you get to constantly build the character and find him over the course of 12 episodes. That’s the fun part of doing TV. It definitely moves quicker and you don’t spend as much time on scenes, but I kind of liked that.

When you were first cast in “Project X,” did you have any idea it would lead to the career you have now, or that you’d be sharing the screen with TV stars like David Duchovny and Michael Imperioli?
I had no idea what to expect after “Project X.” I certainly never envisioned I’d be on “Californication,” and I watched the show! I shot it when I was 20 and when you star in a hit movie like “Project X,” people tell you you’re gonna be a big movie star. They actually tell you that crap. Two years later, honestly, I just want to be able to keep working. It’s an unbelievable profession.

You just worked with Joe Dante on the horror comedy “Burying the Ex.” How was that experience?
That movie was really cool and it kind of came out of nowhere. I found out about it a week or two before we started shooting. Between “Gremlins” and “The ‘Burbs” and “Matinee,” Joe Dante is kind of a legend. With this one, I felt like I’d literally gone into the 1980s and made a movie there. He’s an old-school filmmaker and the script had a real old-school vibe to it, and I loved those kinds of movies when I was younger. The rest of the cast was great too. Anton Yelchin, Ashley Greene and Alexandra Daddario were all great to work with.

What else have you been working on since “Project X”?
I wrote a movie with a friend of mine who’s a brilliant writer-director. We premiered at the Los Angeles Film Festival. It’s called “Four Dogs” and I star with Dan Bakkedahl, who I’ve worked with before on a couple of smaller things. We shot it for $25,000 and we’re trying to get a distributor. Hopefully that will come out on iTunes and Netflix in the near future.

Did you like writing and producing your own material?
Nah, I hate producing. I’d be happy to never do it again. It was fun calling up friends and asking them to make a movie with me, but dealing with the business side was fucking terrible and I hated it. When I moved out to L.A., I lived with my aunt, so the movie is really about me living with her and taking care of her dogs. She actually plays herself in the movie. It was small, but we didn’t have anyone else telling us what to do. I’m still working on a couple different projects and trying to produce stuff too, because it’s very difficult to get something going. I’m always working on my own stuff for me to act in. It’s hard to get good acting work, so you’ve gotta create it for yourself.

I hear that a lot from actors who are frustrated with the roles they’re offered and set out to create their own opportunities.
Well “Project X” was the first audition I went on and I got it, but then everyone sees you as that guy and thinks you can only do that. I have other stuff I want to do and try. People don’t even wanna give you a shot at it.

Are you looking to make a conscious transition like Jonah Hill and seek out more dramatic roles?
I’d never say no, but I’m not trying to be some extraordinarily dramatic actor or only looking for those opportunities. My favorite movies and TV shows are grounded in reality. “Californication” is a comedic show but it’s grounded, it’s not a sitcom. I’d like to do more stuff like that. I do love comedy and I think it’s important.

Was David Duchovny’s approach to directing the season premiere different than the other directors you worked with on “Californication?”
Not really. That show is such a well-oiled machine, especially in its seventh season, that everything was smooth. Doing TV, you have to fit the style of past episodes, so that was interesting. It’s not the same as doing a movie. The creator of the show is much more involved in creative decisions than the director of the episode.

And how was it working with Heather Graham? Again, I wouldn’t have imagined you as her son, but you two had nice mother-son chemistry and pulled it off.
She’s the nicest person you could ever meet. She’s amazing. We had nice chemistry because she came on the show the same way I did. People had been working together for seven years but we didn’t know the rest of the cast personally, so we went out to lunch to get to know each other. We had chemistry right off the bat, but everyone on that set was awesome.

Are there any other TV shows you’d like to join as a ringer for a few episodes?
I haven’t seen all of “Game of Thrones” and I don’t think I’d even fit into that series, but I’d love to be on that show and get killed real quick. I’ve read a lot of network shows but after doing a cable show, it’s hard to want to do one of those. I’ve been watching “Silicon Valley,” which is really funny.

Seen anything else good lately?
I saw “Bad Words” and really liked that. It was funny and I really liked Jason Bateman in that movie. I also saw “Noah,” which was interesting and definitely intense.

Before I let you go, what’s the deal with “A Film by Alan Stuart Eisner”?
I’ve been attached to that one for about two and a half years. Robin Williams is supposed to star. It’s one of those movies where I keep getting calls about it, but it’s an indie movie so it’s hard to get financed. I hope it gets made because it’s a really great script.