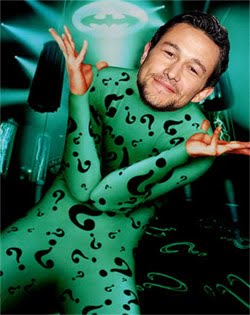 In today’s Callbacks — your daily roundup of casting news from Deal Central — Riddle me this: Which "Inception" star is director Christopher Nolan reportedly considering to play a possible villain in WB’s "Dark Knight" sequel? Answer: The same talented young actor who Dania Ramirez will co-star with in David Koepp’s "Premium Rush." Oh, and James L. Brooks retitles his upcoming movie, Stallone’s "Expendables" go haRd and Sandra Bullock has a non-rom-com coming out before "Most Wanted." She just doens’t know what it is yet, so … neither do we.

• Let’s kick things off with an exciting rumor … but strictly a rumor nonetheless.

"Inception" star Joseph Gordon-Levitt is reportedly "on the short-list" to play The Riddler in Christopher Nolan‘s next Batman movie, according to Hollywood Life.

A source close to the director says "Chris really dug Joseph [as an actor]. There was a joke at first between them [on the set of "Inception"] that Joseph wanted to read for "Batman 3" and things heated up as filming continued."

The insider added that "it’s not 100% confirmed that he’s getting [the role of The Riddler] but there’s certainly talk about it."

Who knew that the stars of "10 Things I Hate About You" would grow up to torment the Caped Crusader? The high school comedy starred Gordon-Levitt and the late Heath Ledger, who won an Oscar for his unforgettable turn as The Joker in "The Dark Knight."  By that measure, Nolan might want to take a look at recently-cast "Dexter" star Julia Stiles to play Catwoman.

Nolan has already said that he won’t be recasting the role of The Joker, preferring to pit Bruce Wayne against another villain.

A representative for Gordon-Levitt has already denied the rumor, which is to be expected, considering David S. Goyer hasn’t written the screenplay yet (so who’s to say The Riddler will even appear in the movie?) and the WB film doesn’t open for another two years. [Photo Credit: The Playlist]

Ramirez previously appeared in "X-Men: The Last Stand," and will next be seen on HBO’s "Entourage." She is represented by ICM.

That’s what "a guy" tells Hollywood-Elsewhere, citing "pressure in the marketplace" for Lionsgate to go with the more mild, box-office friendly rating.

From what I’ve been led to believe about "The Expendables," I’m not even sure a PG-13 cut can be found in the footage. I don’t know how or why Lionsgate would want to neuter a movie that has all the ingredients necessary to become a genre classic.

Stallone recently describes the movie to AICN as a "crazy hard R" that will have "people being torn apart," and the film’s official website features the R-rating. (Update: Lionsgate has confirmed that the movie "is a solid, official R." So no need to worry, unless you’re under 17, of course.)

It’s been rumored that Lionsgate has been testing two different versions of the movie, employing a similar tactic that Fox did with "Live Free or Die Hard," which hit U.S. theaters as a PG-13 release.

• Director James L. Brooks has told Vulture that his new movie starring Paul Rudd, Owen Wilson, Reese Witherspoon and Jack Nicholson has been retitled from "How Do You Know" to "Everything You’ve Got" … for now.

Brooks confesses that "titles make me nuts" and he has "a terrible time" with them, adding that a third title could possibly be in the cards before the movie opens December 17.

Both titles are pretty bland, but so was "As Good As It Gets," and that film was nominated for 7 Oscars, including a pair of wins by Nicholson and Helen Hunt for Best Actor and Best Actress, respectively. 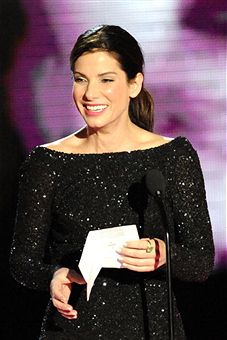 • And finally, to clarify yesterday’s post about Sandra Bullock being attached to star opposite Ryan Reynolds in the romantic comedy "Most Wanted," the project will definitely not be Bullock’s next movie.

Bullock’s agent, Kevin Huvane, told the L.A. Times that "[Bullock] is simply attached to the project, which is currently in development. This is not her next film. There are several projects of many different genres that Ms. Bullock is presently considering and has not committed to any of them at this time. The next project that will follow her Oscar will be chosen carefully and with a great deal of thought."

Bullock more or less reinvented herself as a serious dramatic actress with her Academy Award, but that shouldn’t mean her bread-and-butter romantic comedies are off limits now. A good comedy script is as worthy as any other script.

"Most Wanted" is still in very early development — there’s not even a script, just a pitch from screenwriter Pete Chiarelli — and Bullock is simply attached, meaning she can walk away from the project if she doesn’t approve of the finished script. Expect her next movie to be more in line with her dramatic performance in "The Blind Side" as opposed to the romantic comedies that put her in the position to star in that Oscar-nominated true-life tale.