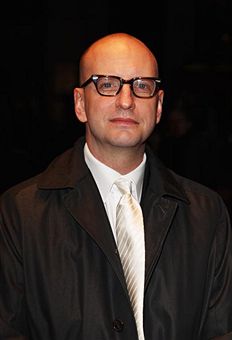 • The Sydney Morning Herald has revealed Steven Soderbergh‘s secret Australian movie to be "The Last Time I Saw Michael Gregg."

The Oscar-winning "Traffic" filmmaker shot the film late last year while directing the Sydney Theatre Company play "Tot Mom." Apparently, Soderbergh worked on the play in the mornings and filmed the improvised movie with the "Tot Mom" cast in the afternoons.

The film is a comedy about a theatre company staging a production of Chekhov’s "Three Sisters," and is told backwards beginning with the show’s triumphant opening night and running through a series of disasters during rehearsals.

The film features characters inspired by real people, including Cate Blanchett and husband Andrew Upton, whose fictional onscreen counterparts Lottie and Ned are played by Essie Davis and Rhys Muldoon. The cast also includes Zoe Carides, Damon Herriman, Wayne Blair and a cameo from Soderbergh himself.

I’m all for Soderbergh’s cinematic experiments, having loved his low-fi mystery "Bubble" and really liked the not-so-erotic drama "The Girlfriend Experience," which featured an impressive performance by adult film star Sasha Grey.

"The Last Time I Saw Michael Gregg" is rumored to play the Sydney Film Festival once Soderbergh finishes editing it.

• Olivia Thirlby will star in Chris Gorak‘s "The Darkest Hour," a Moscow-set alien invasion movie being produced by "Wanted" director Timur Bekmambetov and Tom Jacobsen for Summit and New Regency, according to the Hollywood Reporter.

Story follows a group of Americans traveling abroad when aliens invade the city. Indie darling Thirlby ("The Wackness") will play a trust fund kid who teams up with others to fend off the invaders.

Gorak and Josh Zetumer (Black List scripts "Villain" and "Man of Cloth") are currently revising the script for the action/sci-fi movie. The film starts shooting this summer at Bekmambetov’s production facilities in Moscow.

I dug Gorak’s "Right at Your Door" but I may have been under the influence of Rory Cochrane when I watched it.

Thirlby is about to shoot the lesbian werewolf movie "Jack and Diane" that her "Juno" co-star Ellen Page was once attached to.

• Director David R. Ellis is about go where only "Jaws 3D" has gone before, and you know what that means …

Deadline reports that the man who brought you "Snakes on a Plane" and "The Final Destination" will direct "Shark Night 3D," a $28 million thriller that will shoot this summer in Louisiana.

Much to James Cameron‘s delight, Ellis will shoot the film in 3D, as he did with the last entry in the "Final Destination" series. He’s also no stranger to working with water, having served as 2nd unit director on "The Perfect Storm" and the shark movie "Deep Blue Sea."

Jesse Studenberg and Will Hayes wrote the script, as if this project really needed one of those pesky things. Incentive Filmed Entertainment is financing the project and "Hostel" producers Mike Fleiss and Chris Briggs will produce with Lynette Howell. The film is likely to garner considerable attention at the Cannes market in May.

Ellis isn’t the only filmmaker looking to cash in on this whole 3D thing. Russell Mulcahy ("Highlander") has been working on an Australian film called "Bait" about a group of people trapped in a submerged supermarket who are attacked by tiger sharks (quick, hide the Goldfish!).

• EXCLUSIVE: Michelle Williams is circling one of the lead roles in Noah Baumbach’s "The Emperor’s Children"