The documentary “Who Killed Chea Vichea?” has been banned as an illegal import by the Cambodian government, which says that it intends to stop screenings of the film “wherever they are held.”

The film, which had its European premiere in May at the Cannes International Film Festival, looks into the 2004 murder of Chea Vichea, a Cambodian union organizer who was shot while reading a newspaper at a kiosk in Phnom Penh.

Trade unionists in May attempted to hold the Cambodian premiere of the film at the location where Vichea was murdered, but police stopped the screening and seized the equipment. According to a press release from a film representative, the government says that the film is an illegal import and denies that the action was politically motivated. 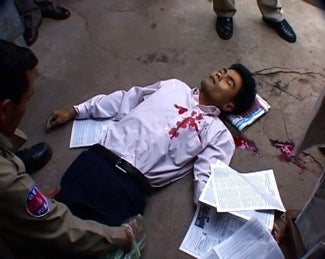 “Who Killed Chea Vichea?” was directed by Bradley Cox, who was on the scene with a camera a few minutes after Vichea’s murder. Cox has conducted his own investigation into the killing, for which two men were sentenced to 20 years in prison after a trial marked by numerous allegations of coercion and government misconduct.

"This is what governments do when they don’t want their own people to know the facts and when they can’t afford to show weakness, even for an instant," Rich Garella, one of the film’s producers, said in the press release.

Bradley Cox is currently receiving treatment for a gunshot wound received in Bangkok, where he has been covering a Thai military crackdown.