It opened on Friday but didn’t wind up on any weekend boxoffice charts.

It wasn’t reviewed in the L.A. Times, the paper of record in the town where it’s playing.

It doesn’t have an MPAA rating.

It doesn’t have a scheduled U.S. release date, beyond this one-week engagement.

It’s not drawing many viewers, judging by the Saturday night show, in which the audience consisted of me and one other guy.

It’s a kid-friendly movie, but it only screens once daily: 1 p.m. on school days, 10 p.m. on Friday and Saturday. (A Sunday afternoon showing was the single convenient screening for school-age moviegoers.)

If any kids do happen to see it, they’ll probably have trouble getting into the ecologically-minded tale of animals being hunted down for mysterious reasons; it’s in Spanish, and its subtitles are riddled with spelling and grammatical errors. 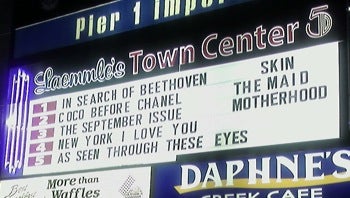 And it’s not even advertised on the marquee of the Laemmle Town Center in Encino, the one theater in which it’s playing. (Photo, right)

But in the world of animation, “The Missing Lynx: Paws on the Run” could prove to be one of the year’s most significant releases.

The director of the Spanish movie, Raul Garcia, confirmed to theWrap on Saturday that the company had submitted the paperwork required to enter the film in the Oscar animated-feature race.

The news is crucial because for the last couple of weeks, the number of entries in the category appeared to have stalled at 15. If 15 movies qualify, the category will have three nominees; if 16 do so, it’ll jump to five.

With a number of high-profile, well-reviewed films in the running, and with “Up” and “Coraline” seemingly heavy favorites for the first two slots, a slate of three nominees would have resulted in a dogfight for the final spot between the likes of “Ponyo,” Disney’s “The Princess and the Frog,” the buzzed-about “Mary and Max,” Sony’s “Cloudy with a Chance of Meatballs,” Wes Anderson’s “The Fantastic Mr. Fox,” “9,” and the boxoffice hit “Ice Age: Dawn of the Dinosaurs,” among others.

It’s been a waiting game within the animation community in recent weeks, as a slate of eligible films that once seemed likely to top 16 dwindled. The Japanese film “Evangelion 1.0: You Are (Not) Alone” was disqualified, “The Illusionist” opted for a 2010 release, and “A Town Called Panic” played in New York but not Los Angeles. (To qualify, a film needs seven days in L.A. County.)

Some observers wondered if Fox and Sony, two companies that stand to gain by reaching the magic 16 figure, would quietly push to make sure something else got a quickie qualifying run and filled out the paperwork.

(Disney already did its part by giving “Tinker Bell and the Lost Treasure” a one-week qualifying run at the El Capitan and submitting it to the Academy before sending it to DVD.)

But now, with the deadline for Oscar submissions arriving at 5 p.m. on Monday, we may have an unlikely savior in the form of “The Missing Lynx,” a Spanish film that was released in that country in December 2008, winning the Goya Award for best animated feature. 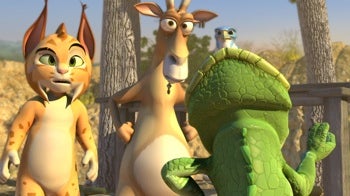 Garcia says that he didn’t receive any pressure or encouragement from the major studios to qualify his film – in fact, he did so on his own, precisely because he thinks the category should have room for more than just studio productions.

“I am the first one interested [in] having a wide selection of films for Oscar consideration because I [think it] is good for the industry and for the filmmakers to have five nominees this year,” he said in an email. “The more the better to have more room for independent films or films with different sensibilities than big studio, big budget fare.”

Apparently, the chance exists to increase the number of submissions – over the past week reports have surfaced that “A Town Called Panic” may schedule a qualifying L.A. run after all. And if 20th Century Fox is determined to reach 16 submissions to give “Fantastic Mr. Fox” a better shot, theoretically the studio could submit its Christmas release “Alvin and the Chipmunks: The Squeakquel,” a blend of live-action and animation that likely has enough animated content to qualify.

(It doesn’t cost anything to make a submission, but you have submit forms signed by the producers by Monday, and deliver a print of your film to the Academy by Friday.)

It’s still possible that some films that appear to be eligible could be disqualified for various reasons. It’s also possible that films that aren’t on anybody’s radar have been submitted. (“Every year when the Academy releases the final list of what films have qualified, it includes a couple of movies I’ve never even heard of,” said one category insider at a party for “Coraline” director Henry Selick last Friday.)

An executive committee from the Academy’s short films and feature animation branch will meet on Tuesday and, if it sees fit, recommend to the board of governors that an animated feature award be given out this year. That’s simply a formality; there’s no way they won’t make that recommendation in such a strong year for animation.

Then the branch will go about certifying the eligibility of the films that have been entered. A list of all the qualifying films will likely be released mid-month, along with official word on how many nominees the category will have.

At that point, it’s up to the voters. In the first round of balloting, volunteers can come from any branch of the Academy as long as they agree to see 80 percent of the eligible films (in theaters rather than on DVD screeners). They’ll screen the films and score them on a scale of 6 to 10; no matter how many nomination slots are available, only films that receive an average score of 7.5 can be nominated.

(It’s probably safe to assume that we’ll have enough high-scoring films this year to fill out as many slots as are available.)

And then, at the end of this complicated process, after weeks of see-sawing between three nominees and five nominees, after confusing the studios and keeping campaigners on edge, after one round of vetting, one round of judging and one final round of voting …

After all that, “Up” will win.