So in this dire market for independent film, your intrepid WaxWord reporter went wandering to find what is working.

I found the guys who run The Asylum, a self-described factory for movie mock-busters (think Roger Corman in the 21st century), a system that successfully keep the churn and the cash flow going at the rate of one movie a month, and revenues of about $5 million per year. Cannes, Shmannes. It’s not every day you get to see movies that feel familiar but yet aren’t really. 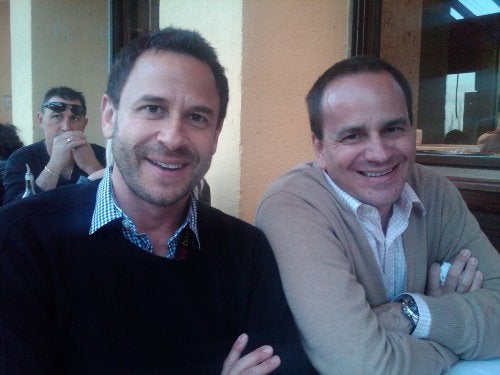 When “Transformers” came out, partners David Rimawi and Paul Bales (pictured at a local pizzeria) made “Transmorfers,” at some small fraction of the cost. They did “The Day the Earth Stopped,” they’re doing “Six Guns,” a western, and “Cheerleader Camp.”

They recently had a hit in “Mega-Piranha” on SyFy, where an increasing number of their movies are ending up. “We’re doing a lot of big fish movies,” said Paul.

Most of their movies cost about $250,000 each, though the ones for SyFy have to hit a $1.8 million minimum budget. And guess what? Business is grand.

The two did so well selling international rights at the Berlin Festival that the sales here at Cannes – which are brisk, they’re happy to say – is “gravy.”

“Our strategy is to talk to buyers and – make that,” said David. Paul added: “We’ve always pursued the market. I often describe our titles as crap. But I love our movies.”

The two have been best friends since they were eight in a small town near Kalamazoo, Mich. They started The Asylum 15 years ago, and have moved their business away from DVD into cable television and VOD, where it is flourishing.

“There’s nothing wrong with important cinema,” said Paul. “But my Netflix queue is full of important films I’m never going to watch.”

David: “The audience is just not there for independent and arthouse films.” Paul: “You fall in love too many times, and those movies are never distributed. You get your heart broken too many times.” Coming soon: “Titanic II.” Starring Bruce Davison and Brook Burns, it’s about the launch of a ship that sails the same route as the original Titanic, but 100 years later.