In today’s roundup of Cannes news ‘n’ notes from around the web, the days dwindle down and the awards handicapping heats up.

Roger Ebert prepares to bid farewell to Cannes with a quote from Frank Sinatra (or, to be more accurate, Kurt Weill and Maxwell Anderson): “The days dwindle down to a precious few.” Before he goes, he offers a salute to Doug Liman’s “Fair Game” (“one of the festival’s most solid films”), writes admiringly if unenthusiastically about “Uncle Boonmee Who Can Recall His Past Lives,” and dismisses Lodge Kerrigan’s “Rebecca H. (Return to the Dogs)”: “This is a film within a film about a film, and if that makes three films, none of them work.” (Roger Ebert’s Journal) 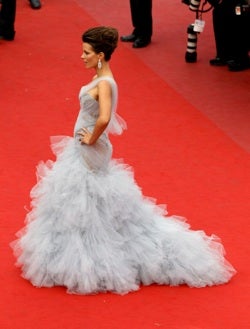 “Who are you wearing?” isn’t nearly as crucial a question at Cannes as it is at the Oscars – but with all those photographers around, one does have to look good. Mark Brown says the busiest fashion plate of the festival has been juror Kate Beckinsale, and the Guardian proves it with a slideshow: Kate does Cannes in eight gowns. For the record, it appears that white (or variations thereof) is her favorite color. (The Guardian)

J. Hoberman gives a quick rundown of what we might expect from Beckinsale and her pals on the Cannes jury, concluding that there’s no real Palme d’Or favorite, but that “Biutiful” will probably win. If it were up to him, though, he’d give it to “Uncle Boonmee Who Can Recall His Past Lives,” “easily the freshest movie in competition.” (The Village Voice)

Guy Lodge leaves a screening early and talks to a festival usher who, he thinks, sums up the problem with this year’s selections: “What you’re saying is that they have no … no balls, you mean?” But then, unexpectedly, Lodge comes across a film he feels certain will be an Oscar nominee for Best Foreign-Language Film: “Life, Above All,” from South African director Oliver Schmitz. It is, he says, “broadly resonant enough to merit international exposure beyond the Croisette.” (In Contention)

The most glamorously well-meaning Cannes soiree is always the amfAR “Cinema Against AIDS” event, a fundraiser sponsored by the Weinstein Company, Bold Films and Palisades Tartan, and usually hosted by Sharon Stone. The actress couldn’t make it this year, but Pete Hammond was there to watch replacement Alan Cumming conduct an auction that raised $7.5 million. Attendees got to bid on everything from a day with Bill Clinton to a 2011 “Oscar weekend package” that includes party invites, tickets to the Spirit Awards, lunch with Harvey Weinstein and Quentin Tarantino, clothes … everything, in fact, except for actual tickets to the Oscars, which simply cannot be auctioned off, even for charity. (Notes on a Season)

Screen Daily picks up the “Cannes might not have had the strongest lineup, but boy is Venice going to be great!” story. The key, of course, is Terrence Malick’s “The Tree of Life,” though Darren Aronofsky and Clint Eastwood and Sofia Coppola and Julian Schnabel and Danny Boyle and Julie Taymor and Bela Tarr and Susanne Bier aren’t so bad, either. (Screen Daily)

Michael Phillips looks back at the festival, where he says the Icelandic volcanic ash and the global economic crisis could be sensed “in every corner” of the festival. His favorite festival film was the Korean drama “Poetry,” he says the financial-meltdown documentary “Inside Job” is “the most blood-boiling documentary of the festival,” he’s not a fan of “Biutiful,” and he calls “Certified Copy” “one of the most divisive competition entries” without really saying what he thinks of it. But he seems really excited to receive a parting gift of three spoonfuls of volcanic ash from the director of the Icelandic Film Centre. (Chicago Tribune)

British director Ken Loach, who won the Palme d’Or for “The Wind that Shakes the Barley” four years ago, returns to the fest with “Route Irish,” an Iraq-themed film that, says Eric Kohn, “never really takes off.” Kohn thinks the lead performance (by Mark Womack as an angry Iraq vet looking for those responsible for the death of his best friend) is one-dimensional and the plot overwrought – but, he adds, “there’s no denying its basic power as targeted polemic.” (indieWIRE)

Four British critics (and one moderator) sit around a table and talk about the festival. The consensus: not a great year. They throw around words like irrelevant, arrogant, uninteresting, reactionary, and then take some shots at Hollywood and American films. But one of them compares the Godard film to the Icelandic volcano erupting, which he means as a compliment. (The Guardian)

Eugene Hernandez talks to Edgar Ramirez, who plays the title role in Olivier Assayas’ marathon “Carlos.” Talking about the narcissism evidenced in the film by the international terrorist known as Carlos the Jackal, Ramirez says, “In any human process we can’t escape from the vanity, the power and the ego. Not even in acting.” Not even in acting? Hey, I always figured that vanity, power and ego were the very foundation for a lot of actors. (indieWIRE)