In today’s roundup of Cannes news ‘n’ notes from around the web, “The Leopard” returns looking good, and a terrorist complains that a movie’s making him look bad.

Martin Scorsese brought a newly-restored print of Luchino Visconti’s 1963 Palme d’Or winner “Il Gattopardo” (“The Leopard”) to Cannes, and Anthony Breznican took notes. He found the restoration, overseen by Scorsese’s Film Foundation and underwritten by Gucci, to be “remarkably beautiful,” though the movie seemed to have been a bit slow for his tastes. Scorsese’s introductory remarks about the character played by Burt Lancaster could probably apply to some in the film industry these days: “The prince … understands what no one else around him understands – that his way of life is over, and there’s a new world coming.” But on behalf of the old world of European cinema, “Gattopardo” costars Alain Delon and Claudia Cardinale showed up and received a huge ovation. (USA Today) (Photo of Cardinale, Delon, Scorsese and festival director Gilles Jacob, below, by Michael Buckner/Getty Images.) 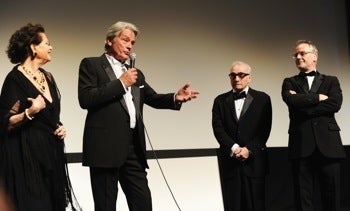 Steven Zeitchik previews “Carlos,” Olivier Assayas’ miniseries-turned-film about the convicted terrorist Carlos the Jackal. I’ve gotta say, Zeitchik seems really ticked off that he’s going to have to sit there for five-and-a-half hours. In eight paragraphs, I count at least 12 different jokes, or sometimes just snide comments, about the movie’s length. But if the movie were only, say, two hours long, wouldn’t he be using that extra time to see something else, thereby spending about the same amount of time sitting in the dark? (24 Frames)

The real Carlos the Jackal – whose real name is Ilich Ramirez Sanchez – slammed the film on Friday from the Paris prison where he’s serving a life sentence. He tells the news agency AFP that the script is full of “deliberate falsifications of history, and lies,” and that his real-life terrorists acted much more professionally than the ones in the movie. Those scenes of kidnappers and murderers hysterically waving machine guns just makes them look bad, you know. And Carlos doesn’t want his guys looking bad. (The Calgary Herald)

Roger Ebert finds that Cannes is “still relatively quiet.” But that doesn’t stop him from seeing a batch of movies: he loved the animated tale “The Illusionist,” from “Triplets of Belleville” director Sylvain Chomet, and finds “The Housemaid” extraordinary, and a definite possibility to win the Palme d’Or. (Roger Ebert’s Journal)

Anne Thompson recaps her day, during which she finds a film she can wholeheartedly endorse: “The Housemaid,” a thriller from South Korean director Im Sangsoo (or Sang-soo Im, or Im sang-Soo, all of them variants that have been used over the last couple of days). She thinks the film could be picked up by a U.S. distributor, and calls it “nasty, sexy and deliciously disturbing.” (Thompson on Hollywood)

In fact, “The Housemaid” has been the best reviewed movie out of Cannes so far, according to indieWIRE’s criticWIRE polling method. The site’s “Day 3: Minute by Minute” column sums up the criticWIRE results so far, and finds that “The Housemaid” and the Un Certain Regard entry “The Strange Case of Angelina” have both received an average grade of B (from, admittedly, a limited number of critics), while “Robin Hood,” “Tournee” and “Chongqing Blues” are barely passing with C+ averages. (indieWIRE)

indieWIRE now rounds up the deals that have taken place so far, many of them at the Marche du Film market rather than the festival itself. Among the news: Magnolia Pictures’ Magnet Releasing gets worldwide rights to the action film “Mandrill”; worldwide rights outside of North America for the documentary “Hugh Hefner: Playboy, Activist and Rebel” go to Arrow Entertainment; “Elizabeth” director Shekhar Kapur announces “Paani,” “a love story with an environmental focus”; and young French actor Tahar Rahim (“A Prophet”) joins not-so-young French actor Gerard Depardieu in a new film from Belgian director Joachim Lafosse. (indieWIRE now)

Pete Hammond does Cannes, and files his first report. It covers 101-year-old director Manoel de Oliveira; overzealous security guards; schlock on sale at the film market, his favorite being “Nuns with Big Guns”; and Mathieu Amalric’s burlesque road movie “Tournee.” (Hammond is not the first to spell Amalric’s name Almaric, and I’m sure he won’t be the last.) He says that veteran burlesque dancer and first-time actress Mimi Le Meaux “delivers an award-worthy performance.” (Notes on a Season)