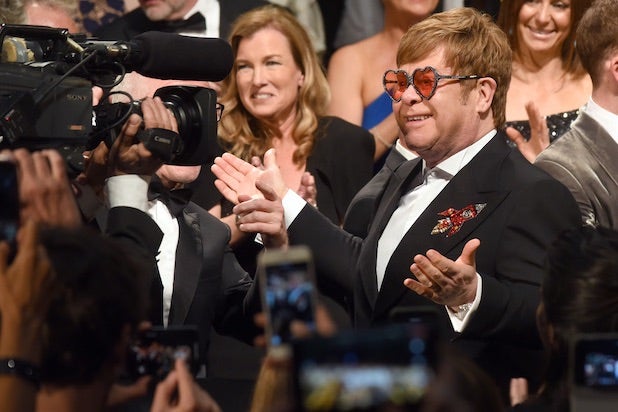 It wasn’t hard to figure out who the guest of honor was when the Academy of Motion Picture Arts and Sciences threw a Cannes Film Festival cocktail party on Friday night. Sure, the guests included studio heads and a number of notable filmmakers from the indie and documentary worlds — but the guy everybody wanted to talk to or be photographed with was Dexter Fletcher, who the night before had premiered his Elton John musical “Rocketman” at the festival to a lengthy standing ovation.

Mainstream commercial movies aren’t guaranteed winners at Cannes, which can be a snobbish place and has turned up its nose at the likes of “Robin Hood,” “Pirates of the Caribbean: On Stranger Tides” and “The BFG” in the past. But the thoroughly pleasing “Rocketman” was a home run for Fletcher and for Paramount Pictures, and a love fest for its subject. As the festival comes to the end of its first weekend, Cannes is still searching for any artier movie that will generate the kind of enthusiasm Fletcher’s popcorn flick generated.

With 12 of the 21 main-competition titles already screened — along with about half of the Un Certain Regard section and most of the Out of Competition and Special Screenings sections — the most common response to the inevitable “How’s your festival going?” question is clearly something along the lines of, “Good, but I haven’t seen anything that’s really knocked me out.”

In that climate, an enjoyable commercial movie can be the hit of Cannes for a few days at least, though many of its admirers are probably now counting down the days until Quentin Tarantino’s upcoming Sony release “Once Upon a Time … in Hollywood” hits the Croisette on Tuesday.

But there’s something very un-Cannes-like about a festival whose buzziest films are a major-studio rock ‘n’ roll movie and a major-studio Tarantino one. You can take the lack of heat (or bidding wars) as indicative of an ailing indie marketplace in the U.S., where some buyers have disappeared, others are cautious and nobody’s quite sure where streamers like Netflix (absent so far) and Amazon (a modest deal for “Les Miserables”) stand.

Still, it’ll be instructive to see what happens with Terrence Malick’s “A Hidden Life,” which premiered on Sunday. It’s a strong enough film to be a potential lure for the likes of Sony Pictures Classics, Focus Features and Fox Searchlight, the latter of which did well with Malick’s last standout film, “The Tree of Life,” in the days before Searchlight’s parent company was absorbed by Disney.

Also Read: 'A Hidden Life' Film Review: Is This Where Terrence Malick Gets His Mojo Back?

“A Hidden Life” was one of a trio of films that made for an unusually strong Sunday lineup. The other two received even more positively. Celine Sciamma’s “Portrait of a Lady on Fire” was singled out by reviewers as a particularly ravishing entry, and Robert Eggers’ two-person tour de force “The Lighthouse” with Willem Dafoe and Robert Pattinson, created a furor down the Croisette at Directors’ Fortnight.

Those films suggest that this could be a late-blooming Cannes, that the indies could make some noise once Paramount and Sony have done their thing. And truth be told, even with the lack of a knockout surprise or two, the quality has been consistently strong over the first six days.

And consistently grim, too. Ladj Ly’s “Les Miserables” is an unsparing portrait of police violence and societal corruption in Paris, and Corneliu Porumboiu’s “The Whistlers”is a blackly comic look at the same thing in Romania. Mati Diop’s “Atlantics” adds a touch of magical realism to a heartbreaking story of refugees fleeing Africa, while Ken Loach’s “Sorry We Missed You” is a devastating indictment of the ways in which the gig economy can cheat the working class.

Brazilian directors Kleber Mendonca Filho and Juliano Dornelles throw in some genre trappings with their brutal social commentary in “Bacurau,” and two films examine the commodification of love in dramatically different ways: Jessica Hausner’s “Little Joe” is a cautionary tale about genetic engineering replete with horror-movie trappings, while Werner Herzog’s “Family Romance, LLC” is a quietly creepy depiction of a (real-life) Tokyo company that rents out substitute family members.

(Even the jokey opening-night zombie movie, Jim Jarmusch’s “The Dead Don’t Die,” is a message flick in which the dead rise because the Earth’s axis has been shifted by, um, polar fracking. Really.)

These are dark films for a dark age, and they give this year’s Cannes a strong personality even beyond what the festival says about the state of the film business.

Meanwhile, the race for the Palme d’Or heated up over the weekend with the arrival of the Sciamma and Malick films, which figure to challenge  Loach (vying for a record-breaking third Palme win with “Sorry We Missed You”) and Pedro Almodovar (looking for his first-ever win with the beautifully reflective memory piece “Pain and Glory,” which figures to strike a chord with jury president Alejandro G. Inarritu, at least).

Still to come are the Dardenne brothers, also in search of their third Palme, along with Ira Sachs, Bong Joon Ho, Xavier Dolan, Elia Suleiman — and, oh yeah, that Tarantino guy, who should be taking Cannes by storm on Tuesday.

Maybe by then we’ll have moved on from “Rocketman.”