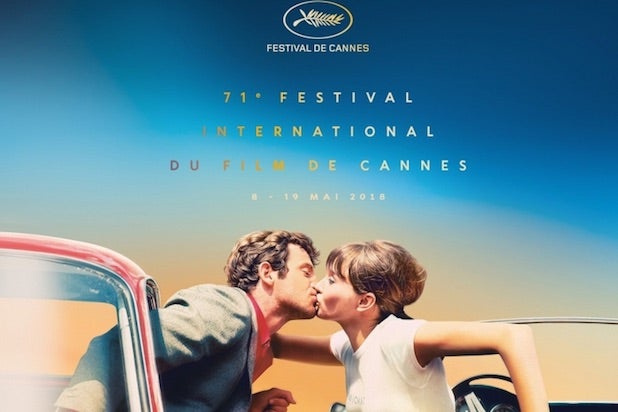 The 2018 Cannes Film Festival will include new films from directors Spike Lee, Pawel Pawlikowski, David Robert Mitchell and Jean-Luc Godard, as part of a lineup light on American films and long on international auteurs both young and old.

Lee’s “BlacKKKlansman” and Mitchell’s “Under the Silver Lake” are the only American movies in the 18-film main competition, although Ron Howard’s “Solo: A Star Wars Story” will screen out of competition.

Celebrated international directors in the competition include Pawlikowski, Matteo Garrone, Jia Zhang-Ke and Godard, who is bringing the new “Le Livre d’Image” to the festival more than five decades after he made the 1965 film “Pierrot le Fou,” which graces this year’s Cannes poster (above).

Two of the directors in competition, Iranian Jafar Panahi and Ukrainian Kirill Serebrennikov, are under house arrest in their home countries. Cannes General Delegate Thierry Frémaux said the festival would appeal to those countries to allow the filmmakers to travel to France to present their films.

Overall, the selection is missing many of the Cannes regulars whose films were rumored to be in the running: Naomi Kawase, Nuri Bilge Ceylan, Mike Leigh, Olivier Assayas, Jacques Audiard and Xavier Dolan, among others. Their films may not have been ready in time, but the selection includes enough first-timers to suggest that the festival was consciously trying to bring fresh blood to the Croisette, and particularly to the main competition.

The selection was announced by Frémaux and festival president Pierre Lescure at a press conference in France on Thursday morning. The films were chosen from what Frémaux said were 1,906 submissions.

The main competition typically contains about 20 films, and Frémaux hinted that additional titles would be added in the coming weeks.

Three of the directors in the main competition are female: Eva Husson, Nadine Labacki and Alice Rohrwacher. Since the festival began in 1946, only about four percent of the directors in the main competition have been women. But since 2000, that percentage has inched up to about nine percent, with a high of four women landing films in the competition (which usually consists of about 20 films) in 2011 and three doing in 2006, 2007, 2009, 2015, 2016 and 2017.

As previously announced, the festival will open with Iranian director Asghar Farhadi’s Spanish-language “Everybody Knows,” starring Javier Bardem and Penelope Cruz, and will include an out-of-competition screening of “Solo: A Star Wars Story” and a 50th-anniversary presentation of Stanley Kubrick’s “2001: A Space Odyssey” hosted by Christopher Nolan.

The festival will not include any movies from Netflix, which opted not to submit any films in the wake of rules banning films from the main competition if they didn’t have a French theatrical release.

Rather than submit films for the festival’s out-of-competition sections, Netflix opted to withdraw all its potential Cannes entries. This affected both possible competition titles like Alfonso Cuaron’s “Roma” and Jeremy Saulnier’s “Hold the Dark” as well as two likely entries in the out-of-competition Cannes Classics section: the newly completed version of Orson Welles’ final, unfinished film, “The Other Side of the Wind,” and Morgan Neville’s documentary about the completion of that film.

The 2018 Cannes Film Festival will begin on Tuesday, May 8 and run through Saturday, May 19. Cate Blanchett will serve as president of the main competition jury, while Benicio del Toro will head the Un Certain Regard jury.