“Robin Hood” certainly didn’t take Cannes by storm – and now, after its first couple of screenings, it’s safe to say that neither has the festival’s other big-studio Hollywood production, “Wall Street: Money Never Sleeps.”

While Oliver Stone’s sequel to his 1987 drama has drawn quite a few respectful early reviews, there’s not been  much enthusiasm. 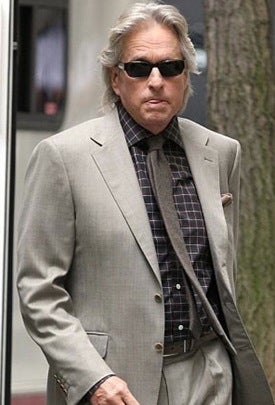 Entertainment Weekly’s Owen Glieberman delivered about as positive a summary as you’ll find when he wrote, “The movie is no classic, but it’s vibrantly acted and entertainingly overstuffed, a shrewd and complex finance melodrama that pulses along with hardboiled verve.”

The Hollywood trades, meanwhile, were both relatively positive. Kirk Honeycutt in the Hollywood Reporter wrote, “One senses a fully engaged filmmaker at the helm, driving the movie at a lightning pace as if in a hurry to get to the next scene or next aphorism that further illuminates this dark world.”

At Variety, Justin Chang called the film a “shrewdly opportunistic, glibly entertaining sequel, which offers another surface-skimming peek inside the power corridors of global finance, this time during the 2008 economic crisis.”

Jeff Wells at Hollywood Elsewhere almost liked it more than that – but in the end, thanks to an event revealed in his review (spoiler alert), the movie lost him: “’Wall Street 2’ … is an intelligent, briskly paced, rat-a-tat financial tale that moves along nicely for the first 75% to 80% of its running time — not brilliantly but sufficiently, offering a more-or-less decent ride. And then it blows itself up during the last 25 minutes or so.”

Todd McCarthy also had a problem with ending, which he called “outrageously false.” “[T]he script feels like a pasted-together hodgepodge of elements that co-exist without credibly blending together,” he wrote at indieWIRE, “topped by a climax that feels particularly hokey in its effort to leave audiences comfortable rather than disturbed by what they’ve just seen.”

“’Wall Street’ conceals its trite dialogue beneath a cacophony of rumbling subways and shouting TV nudniks, not to mention a veritable tickertape parade of jargon,” added J. Hoberman in the Village Voice, while Peter Bradshow at the Guardian was similarly cynical, if not quite as pointed:

“Twenty-three years on, Oliver Stone has given us the sequel to the most unsubtle father-son parable in cinema history, theoretically rebooted for our new post-crash era, but in actuality just as saucer-eyed and uncritically celebratory about it all as ever.”

His fellow Brit, the Times’ Kate Muir, focused on the performances from Michael Douglas, Carey Mulligan and Shia LaBeouf: “Beneath the information overload, however, there are some great performances and Douglas is still terrific … Mulligan is a natural, down-to-earth Winnie … LaBeouf does a steady job, but there is just something that says “airline attendant” to me about him.” 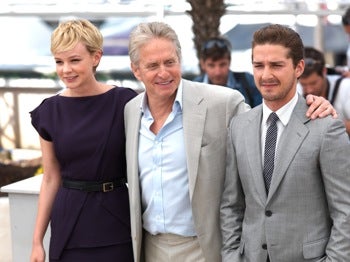 And Anne Thompson summed up the prevailing view nicely: “The movie follows so many threads and characters that none of them is fully-fledged, somehow … The movie pops in and out of satirizing and referencing itself and trying to create an authentic drama. And yet it moves along entertainingly, even if the resolution seems Hollywood pat.”

In other words, few reviewers flat-out hated it, but few loved it either. Just another lukewarm reception for a big movie – because in the early going at least, that’s how it’s been at Cannes 2010.

(Photo of Mulligan, Douglas and LaBoeuf by Dave Hogan/Getty Images)

Of course, it’s not just big Hollywood movies that have been screening at Cannes.  Here are some verdicts on some of the international offerings that have been unveiled in the festival’s first few days:

Todd Mc Carthy, indieWIRE: “a busy, unstructured, piece-meal, moderately lively look at a desperate French promoter shepherding a bunch of brassy American practitioners of New Burlesque on gigs around the coast of France.”

Guy Lodge, In Contention: “[The] lack of urgency ultimately overwhelms the film in its final third, where it becomes clear that Amalric has little on its mind beyond cottonwool sentiments of the ‘everybody needs somebody to lean on’ variety, and the hardly taxing 111-minute running time begins to feel a slight indulgence.”

Matt Noller, Slant: “It’s pleasant, to be sure, and I recommend it without hesitation, but it’s also something of a trifle.

Guy Lodge: “It goes without saying that de Oliveira’s film is an acquired taste, more wilfully woolly than his recent work, but it may yet reward a repeat viewing.

Peter Brunette: “The only thing that’s missing in this ultra-formalist exercise, despite the apparent interest in the untutored workmen and the ultra-droll jokes, is any sense of real, breathing life.”

Todd McCarthy: “middle-of-the-road fare with just enough going on to keep you on board, if just barely.”

Jeff Wells, Hollywood Elsewhere: “the general grimness, slow pace and repetition did me in.”

Todd McCarthy: “Ultra-attentive to everything from the characters’ specific sexual quirks to the extravagant, Western-aping lifestyle of a certain strata of the Korean ultra-rich … doesn’t miss a trick in portraying the gamesmanship at play, and the film’s look is positively voluptuous."

Jeff Wells: “Some of what happens in the second half is broad and lurid, and then the stops are really pulled out in the second-to-last scene. But Sang-soo Im … is a formidable pro, and the cast — especially Do-yeon Jeon, the female lead — give assured high-style performances.”

Guy Lodge: “an intelligent, empathetic and extremely well-acted domestic drama that could nonetheless rank as the most polite study of extramarital sex I’ve ever seen."

Natasha Senjanovic, the Hollywood Reporter: “More than slice-of-life … "Tuesday, After Christmas" is dice-of-life — but the dissected minutiae of this adultery drama unfortunately doesn’t add up to a very original or moving whole.”

Todd McCarthy: “Guzzanti goes off on too many tangents and allows her subjects to repeat themselves to eventually diminishing returns.”

And if you want to sample opinions not from reviews but from various tweets, indieWIRE’s Eric Kohn says “Aurora” is great, and EW’s Dave Karger is apparently not alone in thinking that “Chatroom” is one of the worst movies he’s ever seen.