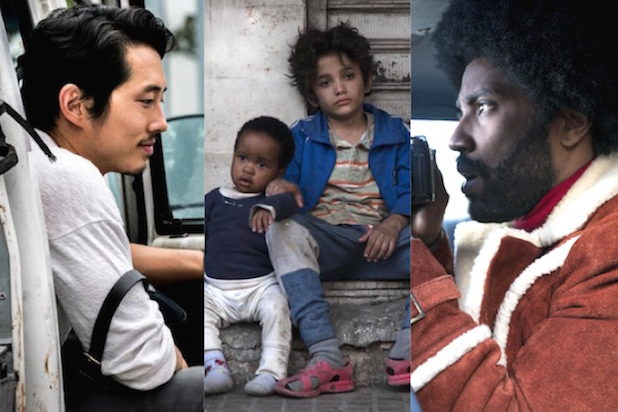 The 2018 Cannes Film Festival is about to come down to a single question: What film will win the Palme d’Or? In the waning days of the 12-day festival, a couple of the strongest contenders in the 21-film field have emerged – but beware, because Cannes juries are nothing if not unpredictable.

After all, it was only two years ago that Maren Ade’s “Toni Erdmann” was by most reckonings the biggest sensation of the festival, setting a new record in Screen Daily’s annual critics’ poll, which tracks reviewers’ reactions to the competition films. But George Miller’s jury sent “Toni Erdmann” home empty-handed, while prizes went to less celebrated films like “I, Daniel Blake,” “It’s Only the End of the World” and “American Honey.”

This year, Korean director Lee Chang-dong’s “Burning” has broken the “Toni Erdmann” record in the Screen Daily poll, landing a 3.8 score out of a possible 4.0. If the critics were in charge, it would be the clear Palme winner, followed by Hizokazu Kore-eda’s “Shoplifters” (3.2), Jean-Luc Godard’s “The Image Book” (3) and a three-way tie between Jia Zhang-Ke’s “Ash Is Purest White,” Pawel Pawlikowski’s “Cold War” and Alice Rohrwacher’s “Happy as Lazzaro” (2.9).

“Burning,” a love triangle of sorts from the Korean director, is also a clear leader in the International Cinephile Society’s ICS Critics’ Panel, which tracks a different group of reviewers and is on a scale of 0-to-5 rather than 0-to-4. “Burning” has a 4.50 average to top that poll, with “The Image Book” the runner-up at 4.37, followed by “Shoplifters” at 4.12 and “Ash Is Purest White” at 4.08.

Only one film from the Far East has won the Palme in the last 20 years, Apichatpong Weerasthekul’s “Uncle Boonme Who Can Recall His Past Lives” in 2010. No Korean film has ever won.

But in a year in which Cannes signed a pledge to push for more female representation, and a year in which 82 women (including jurors Cate Blanchett, Ava Duvernay and Kristen Stewart) staged a protest on the steps of the Grand Theatre Lumiere, the pressure to hand the Palme d’Or to only the second female director in history might also be strong.

If Cannes wants to atone for being one of Harvey Weinstein’s favorite playgrounds by finding a successor to 1993 Palme winner Jane Campion for “The Piano” (irony of ironies, a film distributed by Weinstein’s Miramax), Nadine Labaki’s “Capharnaum” could be a very popular way to go. The drama, which follows a preteen boy of indeterminate age who is trying to care for a one-year-old baby and suing his parents for bringing him into the world, won one of the festival’s longest standing ovations on Thursday and immediately became the focus of Palme conversations.

“Capharnaum” sits near the bottom of both critics’ polls, most likely because they see it as too manipulative – but the Sony Pictures Classics acquisition is clearly a strong Oscar contender in the foreign-language category, and its chances to win Cannes’ top prize can’t be discounted.

“In a year defined by political and moral outrage, the ability to honor something of equivalent force might prove irresistible,” wrote Ben Croll in his review on TheWrap.

The other two women in competition, Alice Rohrwacher (“Happy as Lazzaro”) and Eva Husson (“Girls of the Sun”) are also formidable, Rohrwacher because of the poetic beauty of her gentle fable and Husson because of the muscularity of her story of Kurdish women taking arms against the extremists who abducted and sold them into sex slavery.

Still, it’s hard to imagine Blanchett’s jury going for a female director just to make a point – so if there’s resistance to those films, the panel has plenty of other directions it can go.

Want to make a political point about race? Spike Lee’s “BlacKkKlansman” is a deft blend of black humor and searing outrage over racial injustice. About totalitarian governments? Iran’s Jafar Panahi and Russia’s Kirill Serebrennikov were both forbidden from coming to Cannes with their films by their governments, but they have top-notch contenders in Panahi’s modest but profound “Three Faces” and Serebrennikov’s raucous rock musical “Leto.” Want to surrender to the pleasures of an exquisitely made love story? Pawel Pawlikowski’s “Cold War” will have you swooning.

And then there’s one wild card. The final film to screen in competition is from Nuri Bilge Ceylan, the only competing director who has won the Palme in the past. He turned the trick with “Winter Sleep” in 2014, and it would be foolish to write off his “The Wild Pear Tree,” which will close out the competition on Friday evening.

UPDATE: The first reviews of “The Wild Pear Tree” are now out, and for the most part the three-hour-plus drama has drawn raves, along with numerous suggestions that Cannes saved the best for last. “A gentle, humane, beautifully made and magnificently acted movie,” wrote The Guardian’s Peter Bradshaw;

Without having a mole inside the jury room, there’s no way to tell what Blanchett and company are thinking. IndieWire currently lists “Capharnaum” as their Palme favorite, followed by “Happy as Lazzaro,” “Shoplifters” and “BlacKkKlansman.” Meanwhile, Neil Young’s Film Lounge, a site that’s completely obsessive about these things, has the same top three, though it pushes the Spike Lee film way down and has “The Wild Pear Tree” and “Burning” tied in the fourth slot.

The answers will come on just after 7 p.m. in Cannes on Saturday, a few hours after that other big European event. Which brings up one other question: Will Cannes organizers be sorry they moved their grand finale to Saturday from its usual Sunday slot, and wound up sharing the spotlight with the royal wedding?