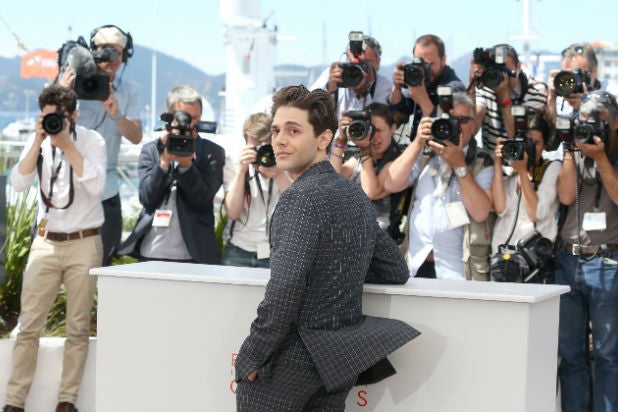 As the sun sets on Cannes 2016, a happy ending evades one of the festival mainstays with who arguably brought his most high-profile film to date.

Xavier Dolan, 27, arrived the the Croisette again with a group of French stars (led by Marion Cotillard and Vincent Cassel) and the drama “It’s Only the End of the World.”

The reviews were pretty apocalyptic.

The movie stars Gaspard Ulliel (“Saint Laurent”) as a terminally ill playwright with strained family relations. Mother, sister and brother are portrayed by Nathalie Baye, Léa Seydoux and Cassel, respectively, leaving his only ally as the sister-in-law he’s never met, played by Cotillard.

“The actors listed above are not only among the best (and most famous) actors in France — they are among the best in the world,” wrote Ben Croll for TheWrap. “But you wouldn’t know it from this film, where no one is given much to do beyond bellowing, bickering and being beautiful.”

One social media user complained, “Dear god, Xavier Dolan‘s ‘It’s Only The End of The World’ is an on the nose stylistic mannered mess.”

Not everyone is as brutal, but many noted the rampant use of tight closeups to evoke emotions in a claustrophobic cinematic experience.

“[Ulliel] looks very ill, but it is not merely his illness. It is a form of nervous breakdown, mingled with guilt and fear. Being back among his family is causing something like anaphylactic shock,” wrote The Guardian.

Unsurprisingly, the best review “End of the World” got was from Dolan himself.

“That’s something you should always believe,” Dolan said at a press conference for the film. “How can you move forward and proceed with things you’ve committed so much time to if you don’t think they’re the best?”

Elsewhere on the Croisette…

It’s interesting to note how early and on-the-money Sony Pictures Classics has been in acquiring what has largely been considered the best work at the festival. Many speculated streaming companies Netflix and Amazon Studios would roll in on a mega-yacht and buy everything in sight.

Hailed as “a quiet little masterpiece,” the animated film follows a shipwrecked man trying to survive and thrive on a remote island. He eventually encounters a stranded woman, and the two have a child and confront “landmarks in humanity” together, according to the official synopsis.

It’s been impossible to avoid the chatter over Olivier Ayassas’ “Personal Shopper,” which reunited him with Kristen Stewart whom he directed to a milestone first-ever Cesar win for “Clouds of Sils Maria.”

Over three days, the film was booed at its first press screenings (which sometimes happens), given a standing ovation at its official premiere (which always happens) and rather remarkably did not hold interest for a third press and industry screening on Thursday.

Press screenings in Cannes are almost always full. The surprisingly small audience gave a tepid round of applause. Interest in the supernatural film may, just like its competitive world of “It” girls and attention seeking fashion, be fleeting.

Docs on the Rise

It’s been quiet on the documentary front but the festival is set to close with two high-profile titles: Laura Poitras’ new project about Julian Assange and Jim Jarmusch‘s film about musician Iggy Pop. Stay tuned to TheWrap, and read our complete Cannes coverage here.