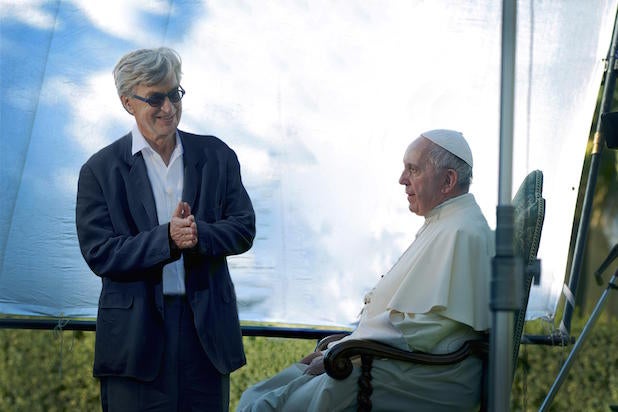 There are very few directors who have made both top-notch narrative films and documentaries, among them Michael Apted, Jonathan Demme, Martin Scorsese, Spike Lee and a recent addition to the list, Cannes juror Ava DuVernay. But the German director Wim Wenders, who won the Palme d’Or for the masterful “Paris, Texas” in 1984 and recently was nominated for Oscars for the remarkable documentaries “Pina” and “The Salt of the Earth,” has to be near the top of the list.

And now he’s come to the Cannes Film Festival with “Pope Francis – A Man of His Word,” a modest and prosaically titled film about the Roman Catholic pontiff who has made it his mission to work on behalf of the poorest and most troubled, even if it means veering closer to controversial liberation theology than to the usual priorities of the Church.

The first thing to say about Wenders appearing at Cannes is that it’s probably a good thing that he’s doing so with a documentary. The 72-year-old director’s last few narrative films have been real duds: “Every Thing Will Be Fine,” “The Beautiful Days of Aranjuez” and “Submergence” were clunky and awkward.

Meanwhile, his two prior documentaries were deserving Oscar nominees. 2011’s “Pina” was a bold and magical performance film about the pioneering choreographer Pina Bausch, with a brilliant use of 3D to create the spaces in which Bausch’s art could take place, while 2014’s “The Salt of the Earth” was a lyrical and incisive look at Brazilian photographer Sebastiao Salgado, the father of Wenders’ co-director, Juliano Ribeiro Salgado.

“Pope Francis,” in many ways, is far closer to “Pina,” which is focused on performances of Bausch’s work, than to “The Salt of the Earth.” In fact, it’s also of a piece with other Wenders films like “Buena Vista Social Club,” because it is, in essence, a performance film.

That’s not to say that the pontiff sings or dances in the movie; his performance lies in conversation. The heart of the movie is Pope Francis sitting in a chair — sometimes a red brocade chair in a room with burnt orange walls, sometimes a pale chair in a garden surrounded by trees, with a church steeple in the distance — and delivering a message.

One of his first comments is, “The world today is mostly deaf,” and from there he spends the early stretches of the film upbraiding the Church for its emphasis on wealth. “I wanted a poor Church for the poor,” he says, and a moment later, “We either serve God or we serve money … As long as the Church is placing its hope on wealth, Jesus is not there.”

Also Read: Is Something Wrong With This Picture? Pope Francis Meets Trump

From there, we get a veritable Pope Francis’ Greatest Hits: washing the feet of poor South Americans (he himself is Argentinian), saying that it’s the duty of church officials to report pedophilia to the authorities, visiting refugees in Greece, decrying Donald Trump’s border wall and commenting, “If a person is gay and is searching for the Lord, who am I to judge him?”

The whole point of the film, driven home by black-and-white reenactments, is that the pope is a revolutionary in the mold of his namesake, Saint Francis of Assisi, who sought to moderate a truce between Christians and Muslims during the Crusades. But in tone and approach, this is an understated, affectionate film, more reverential than revolutionary; it’s less a portrait of the pope than a recital by him, with the boldness of his ideas undercut by the modesty of their telling.

In one way, that’s a strength of “Pope Francis” because it simply presents the man as he is, with a simplicity befitting the pope’s own demeanor. It’s not going to make converts out of anybody — I was raised Catholic, I’m definitely not one anymore and all the movie did was convince me that the pope is a good man.

Then again, Pope Francis is a healer, not a proselytizer. And Wenders knows enough to stand back and let him say his piece and make his peace.