Mortality was on the minds of filmmakers at Cannes on Saturday, as Woody Allen descended on the Cannes festival with his new ensemble comedy, “You Will Meet a Tall Dark Stranger.”

The stranger of the title refers not just to the hoped-for lover, but also to the grim reaper whose arrival is inevitable for everyone. “Stranger” is a relationship farce of 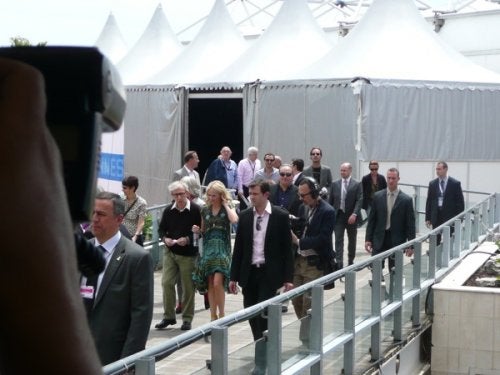 Allenesque complexity, this time tinged with a very personal sense of doom.
Death and the futility of human existence is nothing if not familiar territory to Allen, now 74. The topic takes on a more immediate quality as he approaches the subject in his own twilight years.
“My relationship with death is the same, “ he quipped at the news conference after the film’s first screening “I’m strongly against it.”
But clearly there is a newly felt element of life’s narrowing horizon.
Anthony Hopkins plays an aging fool, who leaves his wife of many decades (Gemma Jones) and quickly marries a gold-digging actress-prostitute (Lucy Punch). (Hopkins was not present in Cannes.)
The film also stars Josh Brolin, Naomi Watts, along with Hopkins and Jones, all coping with familiar Woody Allen relationship games– he loves her, she loves somebody else, he loves still a third. At this point Allen’s films have become so familiar (one might say predictable), that the relationship comic-angst becomes a backdrop for noticing Allen’s other mounting concerns.
In this case, the fact that Brolin’s Roy is becoming obsessed with the beautiful girl across the way is entirley expected; the fact that Hopkins’ Alfie times himself after taking Viagra is something new.
“It’s not an advantage to get older,” he said on Saturday. “I’m 74. We’re not more wise. We’re not more generous. You have problems with back, your eyesight is bad… it doesn’t have a romantic quality. I would avoid it if you could.”
The filmmaker certainly looks to have aged, and struggled at one point to remember the name of the actor who did the voiceover in the film, and then struggled to recall the name of another actor.
Brolin plays the Allen stand-in, a writer who lives with Naomi Watts but becomes enamored of a stunning neighbor (Freida Pinto) on whom he spies across the way.
Allen openly lamented his own age as having pushed him off the screen. “For years I played the romantic lead, then I got too old – I couldn’t play it,” he said. “It’s no fun not to play the guy who gets the girl.”
He continued: “It’s so frustrating to do movies with Scarlett Johansson and Naomi Watts and the other guys get her. I like to be the one opposite them in the restaurant, look them in the eyes and lie to them.”
It’s been a few films already that Allen has wisely left that role to others, though his persona is clearly represented both in Brolin’s writer Roy, and Hopkin’s character, Alfie.
“I’m a very grim, pessimistic person,” Allen said. “Since I was a kid…I had the feeling that life is a nightmarish, meaningless experience , and the only way to be happy is to ….have illusions.”
Easy to forget that Allen still gets to look across the breakfast table at a wife quite a bit younger than he.
Sony Classics will release the film in September.
Meanwhile, the other filmmaker with mortality on his mind is Mike Leigh, who brought "Another Year" to the festival, also on Saturday.  (photo by Sharon Waxman)
***********************
The British auteur director Mike Leigh is as testy as ever, even though he has come to Cannes with a meditation on life and – once again – mortality.
In “Another Year,” Leigh explores a more forgiving side of time’s passage in the married couple Tom and Jerri – played by Jim Broadbent and Ruth Sheen – a working class, middle-aged pair who are happy, and genuinely enjoy one another’s company.
The same cannot be said for those around them — widows, divorcees and single children in various states of disarray and dissolution. (There’s an awful lot of eating and drinking, and a lot more drinking than eating. I wanted to head to detox when the film was over.)
In particular, Mary, played by Leslie Manville, is still attractive but frighteningly desperate for a compass to guide her single life.
The film has a slow, even tone, and is dominated by mundane conversations about work, life, vacation and bills.
Like Allen, Leigh is no youngster, and is reaching the time of life when concerns over the quality of life, and what’s left of it, become paramount.
And he got testy when challenged about the themes of the movie by a couple of journalists at a news conference on Saturday.
One woman journalist dared to ask why he created a character as a single woman who is such a train wreck, as if to suggest that only marriage could result in a happy life for her.
Leigh bit back. “I agree that her life is a disaster. But why do you say I’m mean?”
“Because she’s a helpless person,” said the journalist.
Leigh: “I don’t undertand why you say I was mean. I’d say the film – there are things she’s lived through that we don’t know about.” It took one more exchange for Leigh to suggest the journalist seek counseling:
“Are you suggesting we’re wasting your time showing people who are happy, and we should have only people who are having a bad time? I know a very good counselor. “
Just before he’d made mincemeat of the questioner (Cannes can be rough elbows) he was only slightly more gentle with another journalist who asked about the movie’s theme:
The film is about “how we face ourselves and each other ,” he said.  “I don’t think the film offers a solution. But I hope it raises for all of us, all of you, thoughts to go with, feelings to have, about the way we approach life. That is how we deal with, and learn.”
“We’re all motivated by natural passion to observe life,” he told the journalist who asked about the pace of the film. “Your  question has no real relevance, because people aren’t boring. It’s because you think they are but I don’t they are.”
Read full Cannes coverage at Report From Cannes  and WaxWord Cannes.