The latest edition of James Corden’s “Carpool Karaoke” dropped Wednesday, featuring “Cinderella” stars Camila Cabello, Idina Menzel and Billy Porter. Since these are all “wickedly talented” singers, it’s natural that this installment of the “Late Late Show” segment would be over the top — but it actually defied gravity, thanks to a confession made my Cabello.

Cabello, who is dating fellow singer Shawn Mendes, revealed that she used to singer Menzel’s “Defying Gravity,” her signature track from the Broadway hit “Wicked,” “in preparation for, like, dates, like, for life.” What does that mean? Well, she sang it right before going on her first date with Mendes — after downing two tequila shots.

“I swear to God, before Shawn and I’s first date, I was so nervous I took two tequila shots and sang ‘Defying Gravity’ over and over,” the “Cinderella” star told Corden, Menzel and Porter while they were cruising around Los Angeles in Corden’s car. 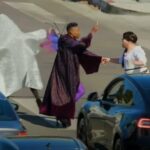 Also Read:
James Corden Brings Back ‘Crosswalk the Musical’ and LA Commuters Are Ticked Off (Video)

“So Shawn and I had been talking for a couple weeks now, like, ‘Oh my God, I’m so excited to see you. I can’t wait to kiss you.’ All that stuff, you know what I mean. And so obviously, there’s just a lot of stakes before the first time. I’m like, ‘Oh my God, do I kiss him when I see him? I don’t know!'”

Cabello confirmed to Menzel that this was post their big 2019 collaboration on “Señorita,” noting “we were friends, but we weren’t together yet.”

“No one had seen each other naked yet,” Menzel said, with Cabello adding a hard: “No!”

“So he’s about to come over, and I’m so nervous, I just can’t take it. My dad is there, I’m like, ‘Pour me two tequila shots. Just do it.’ And I just sang ‘Defying Gravity.'”

Cue Menzel leading the “Cinderella” stars and Corden in belting out the ever-uplifting “Defying Gravity.”

“Oh my God, if Shawn Mendes knew that was happening the second he walked into his first date–,” Corden said when the song wrapped, with Cabello adding, “He’d be terrified.”