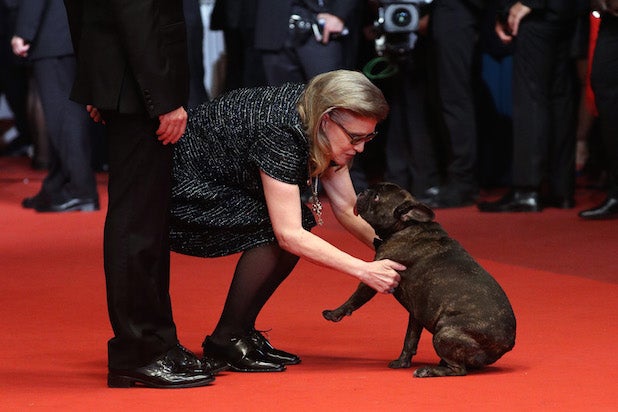 When I was about four or five years old, Carrie Fisher and I used to play together in a park in Beverly Hills. I have no memory of this, but my mother told me it happened and I don’t think she’d lie to me.

What I do remember about Carrie Fisher, though, and what I’ll go back to now that she has died at the age of 60, is the encounters we had as grownups.

They weren’t frequent — really, only about once a decade from the ’80s through this year — but she was so smart and acerbic and self-lacerating (and other-people-lacerating, too) that conversations with her kept you on your toes and provided endless delights.

The most memorable encounters came at the Shrine Auditorium in 1997, when she had been hired to serve as one of the writers for the Academy Awards. I spent 15 years hanging out at Academy Awards rehearsals and production meetings, cultivating lots of sources on the production, but she immediately became my favorite person to dish with.

Of course, nobody was quite sure why Fisher was writing patter for Oscar presenters for significantly less money than she could have made punching up a script. “Fran Liebowitz yelled at me yesterday for doing this show,” she told me as soon as we started talking during rehearsals. “She’s not the only friend of mine who’s done that.”

But she was intrigued by the job and she thought it would be fun — a thought she might have reconsidered when she was assigned to write lines for Courtney Love, the troubled rock ‘n’ roller who had made a notable film debut in “The People v. Larry Flynt.” Love was booked to present the makeup award, so Carrie wrote lines about how, if an actress is lucky, she can report to the makeup trailer early in the morning and “get an extra hour’s sleep while the makeup artists perform their magic, allowing her to nod out plain and wake up pretty.”

But Love didn’t like those lines, and she also objected to another line about how seeing the makeup artists’ magic could be “a sobering experience.”

“‘Sobering experience’ was the first thing to go,” Carrie told me. “Courtney doesn’t like the jokes. She wants to be dignified. She sees this as a chance to do a makeover on her reputation.”

Carrie, whose own substance abuse problems had been the basis of her semi-autobiographical novel “Postcards From the Edge,” laughed. “It doesn’t matter what you do, how long you wait — those things will always be with you,” she said. “They never left me.”

She paused and grinned. “Granted, I wrote a book and a movie about it.”

Eventually, Love came to rehearsal with an Emily Dickinson poem that included the couplet “Then sunrise kissed my chrysalis/And I stood up and lived.” She said she wanted to read that in lieu of any written lines, but Carrie took her aside. “I told her that you can’t say ‘kissed my chrysalis,'” she confided later. “People will think it’s sexual. They’ll think it’s clitoris.”

By the time Oscar day arrived, though, Carrie and Courtney were to all appearances the best of friends, huddling together happily backstage and leaving the Shrine auditorium arm in arm. And Carrie had also enjoyed a moment of satisfaction that had nothing to do with Ms. Love, when security guards making a sweep of the house had inadvertently ejected CAA agent Bryan Lourd, Fisher’s former partner.

“You don’t wish your ex ill,” Carrie said sweetly. “But you don’t necessarily wish them well, either.”

That version of Fisher wasn’t as evident the next time she was hired to write on the Oscars, in 2002. When I first saw her backstage during rehearsals and said hello, it was like talking to a different person — or maybe the same person, but through a haze.

She was in slow motion, it seemed; the occasional wisecrack surfaced, but she just wasn’t as sharp or as active, and it was sad. Still, Paul McCartney, who was nominated for a song from “Vanilla Sky” that year, sought her out backstage, and to all appearances they had a great time — the Beatle aura cut through whatever medication was dulling Carrie at that point.

And during rehearsals, she went the extra step to make sure that Tom Hanks didn’t balk at doing an Alcoholics Anonymous joke she’d written for him. She got down on her knees in the hallway outside the green room and begged Hanks to do it — and he agreed, provided “you now have to check with [publicist] Lesee Dart, [Academy president] Sid Ganis, [show director] Lou Horvitz and [nominee for “The Queen”] Helen Mirren. I’ll do it if her majesty says so.”

Fisher went to Mirren, who said it was funny, and Hanks did the joke.

I didn’t talk to her in person again until last May, when she came to the Cannes Film Festival with Fisher Stevens’ funny and affecting documentary “Bright Lights: Featuring and Debbie Reynolds.”

In Cannes, accompanied by her dog Gary, she was the old : sharp, acerbic and self-aware, a delight to be around even if it was clear that it took effort for her to be “.”

“I read a review this morning that said, ‘Both women look exhausted,'” she said of the film. “And I thought, maybe I should make more of an effort here. My mother wouldn’t allow full access because of her vanity, and it made me think that maybe I should have more vanity, too.”

Instead, she admitted, she allowed Stevens and his cameras access to unguarded and unglamorous moments, including a manic episode, and then found the film nearly impossible to watch. “It was horrifying,” she said. “So I’ll just pretend that I was trying to play an older woman, and try to get over it.”

But those feelings were nothing new, she added, because she’d struggled with self-image her entire life. “It was like that for ‘Star Wars,’ too,” she said. “I didn’t know I was pretty when I was young. I see pictures of me from ‘Star Wars’ — I was very pretty, but I didn’t know it. And I didn’t do a lot of work after that.

“Meryl Streep said to me, ‘I’ve watched myself on film three times a year every year. You’ve gone from the metal bikini to 58 years old.’ And it was not easy.”

She added an aside that I barely noticed when she first said it, but one that jumped out when I listened back to the recording after she was hospitalized.

“My mother is always camera-ready,” she said. “I’ve got to learn to be that way right before I pass away, so they can practice putting me together at the end there.”