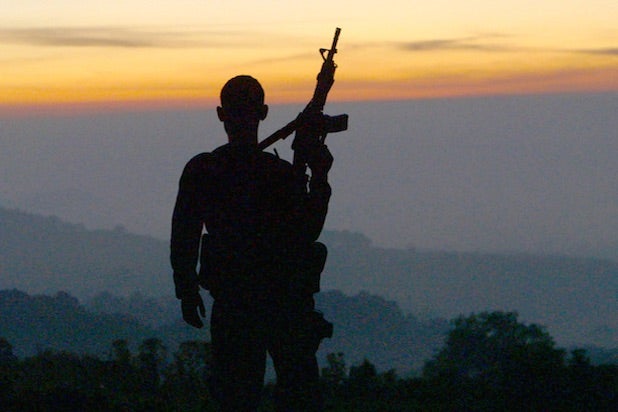 As Donald Trump continues to talk about the problems with illegal immigration and boast of how he’ll erect an impassable wall on the border between the U.S. and Mexico, a film that shows the reality of life along that border is hitting theaters. “Cartel Land” is about the drug trade, not illegal immigration — but as director Matthew Heineman explained in a conversation with TheWrap this week, the two are inextricably linked because of the all-encompassing power of the Mexican drug cartels.

Since its debut at the Sundance Film Festival in January, “Cartel Land” has picked up a big fan and executive producer in director Kathryn Bigelow, and jump-started a conversation about the drug trade since it premiered in Mexico in early July. The film follows two vigilantes on opposite sides of the border: Tim “Nailer” Foley, the leader of a movement in Arizona that polices a valley that is a favorite site for smuggling; and Dr. Jose Mireles, who formed the Autodefensas, a vigilante group that has tried to seize power in areas of Mexico controlled by the Knights Templar cartel.

“Cartel Land” puts viewers in the thick of the action on both sides of the border, with particularly vivid sequences in which Heineman’s camera ended up in shootouts and in a makeshift meth lab in the middle of the desert. By the end of the film, everyone’s motives are murky and it’s hard to know who to trust – a disorienting feeling that Heineman says echoes what he went through when he was following the story himself.

“I was reminded of the Kurds rising up against ISIS — how the Autodefensas catalyzed political will to take control of their situation.  For a time,” said Bigelow in an email to TheWrap. “Their insurgency was inspiring, galvanizing.  Then watching how street craft morphs into state craft.”

Asked why she thought people should see the film, Bigelow added,  “Just as it is important to understand and follow what is happening in Syria and Iraq, as well as the terrorist militias across Africa like al Shabaab, LRA, Boko Haram, there are multiple militias in an ongoing struggle just 150 miles south of the United States border. It is definitely in our interest to try to understand what is happening there. Why 43 students have been disappeared and now declared dead. There are countless other atrocities. ‘Cartel Land’ offers a hard look at a painfully difficult subject.”

The film opens in Los Angeles on Friday, with Heineman doing post-screening Q&As at the Arclight conducted by Josh Brolin on Friday night and Bigelow on Saturday.

TheWrap: What was your goal in making “Cartel Land?”
Matthew Heineman: I wanted to go beyond the headlines, to put myself and my camera right in the center of the action. I wanted to see the effects of narco violence on everyday people, to see everybody people rising up to fight back – and ultimately, the ramifications when that happens.

And I wanted to show the war up close and personal – viscerally, emotionally, through the characters that I spent time with.

You think of what’s happening with the Mexican drug trade as a war?
Yes. One of the things I really hope this film does, especially in America, is show that there’s a war that’s happening in the country just south of us. A war where 80,000 people have been killed and 20,000 disappeared since 2007.

This is a war we’re connected to. We talk about ISIS, we talk about all these horrible groups around the world, but this is something that’s happening just south of us, in a country we share a history with, a border with.

The idea of border security has been very much in the news lately …
Are you talking about Mr. Trump?

Yes. What do you think about his characterization of Mexican immigrants, or his ideas for what is needed along the border?
I prefer not to answer that. This film’s not about immigration. It’s about citizens who have taken the law into their own hands to fight for what they believe in, and the complicated ramifications that come with it.

But I think I can answer your question without directly answering your question. What we see on both sides of the border is perhaps the noble intentions of leadership, and perhaps goals that might make sense. But when you’re operating outside the law, you can’t control the men within your ranks.

Nailer says it himself: “I originally came down here to stop illegal immigrants from coming across our border, and then I realized that the real enemy is the cartel, not the immigrant that is coming across.” But he needs men to help him do what he wants to do. And that brings a lot of people who might have different motivations, different reasons for being there.

How closely linked are the drug trade and illegal immigration?
It used to be that there were two businesses: there was drug smuggling, and there was human smuggling. They used different trails, went though different valleys, were run by different people. And now everything that comes across the border is controlled by the cartel. Humans, drugs, whatever it is.

And what that often means for immigrants coming across is that if they can’t pay the fees to come across, the cartel says “OK, just throw some drugs on your back and we’ll let you come through.”

How different is the finished film from the story you originally thought you were telling?
It completely changed. Especially on the Mexican side of the story, I thought I was telling this very simple hero/villain story, of guys in white shirts fighting guys in black hats. And over time, I realized that the lines between good and evil were much more blurry. And that blurriness and murkiness fascinated me.

That was what was so scary about making the film — by the end, I could be on a mission, and I truly didn’t know if I was with the good guys or the bad guys. I almost became obsessed with trying to understand what was really happening.

When you followed people and ended up in a shootout or a meth lab in the middle of the desert, did you think to yourself, “Wow, this is great footage,” or “What the hell am I doing here?”
I’m not a war reporter. I’ve never been in situations like this before — my last film was about health care in the U.S. So the whole situation was pretty terrifying. But in the shootouts, in places of torture, in the meth lab, in these crazy places that the film led me to, being behind the camera and focusing on the craft of filmmaking calmed me down during these more intense moments.

But I think the scariest moment for me was not the shootouts – it was an interview that I did with a young woman in which I sat in a room with her, and she described how she and her husband were kidnapped by the cartel, and how he was chopped to pieces in front of her, and then burned to death, and how she was molested and the atrocities she saw. To look into her eyes, and it was almost as if her soul had been sucked out of her. And to think that we’re the same species of human being that would do that to other people, that stuck with me more than any of these other moments.

Can anybody really win the fight against the cartels?
I think we have to remember one thing that’s really important: Especially on the Mexican side, this movement was born out of an absolute failure of government institutions. These people are living in a world where there’s no one to trust. Living in a world that’s Cartel Land. The Knights Templar ran almost every aspect of civic society. They taxed the people, from local tortilla makers to multinational corporations, and killed or threatened anyone who got in their way. They were either paying or directly linked to local police, local government officials.

That’s where this movement was born out of – a desire to bring order out of chaos, to bring basic security to terror. But I think what we see in this film is that when armed groups rise up and they’re operating outside the law, you can’t control where they go or what happens. And I think you see that when you fight against evil, you can start to become evil.