I didn’t go to Toronto, which means I’m playing catch-up these days. Catching up with screenings of the movies that showed there, rounding up the fall’s awards contenders, trying to separate the buzz from the hype, that sort of thing.

So here are a few verdicts, and a few Oscar musings, on films I recently caught up with, or saw prior to Toronto, or watched in theaters after their release.

By the way, an indieWIRE poll of writers in Toronto led to some online discussion about who exactly deserves to be called a film critic, and whether Oscar bloggers qualify. For the record: I’m a guy who likes movies, sees a lot of them and has experience following the awards race. I’m not a movie critic. There was a time when I would have copped to being a rock critic (shudder), but that was long ago.

So I make no claims to critical authority. But I do have opinions, and here they are: 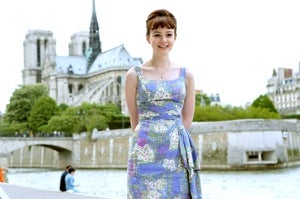 Verdict: Flat-out wonderful. Nick Hornby’s scripts, like his books, are funny and true and touching. (Off-topic: nobody has ever captured the way in which music works in people’s lives as well as Hornby did in his thin, casual volume “Songbook.”) Carey Mulligan is luminous and heartbreaking. The characters who start out cartoonish (Emma Thompson and Alfred Molina) don’t end up that way at all. Director Lone Scherfig’s touch is deft and her eye is keen. I am mighty impressed by “The Hurt Locker,” but so far this lovely little drama is my favorite film of the year. (Carey Mulligan photo: Kerry Brown/Sony Pictures Classics)

Oscar hopes: Mulligan not only needs to be nominated, she needs to be at or near the top of the pack. If enough voters see it, a best picture nomination ought to be assured. A supporting nod for Molina is a clear possibility. And if Hornby doesn’t get an adapted-screenplay nomination, something’s seriously wrong with the writers branch of the Academy.

Verdict: I sat there for the first half of the movie thinking, "this is stylish, and clever, and wonderfully shot and edited … and I hate it."  See, there’s something about a movie populated by grotesques that just turns me off. (Alexander Payne annoys me the same way when he’s making fun of all his small-town characters in movies like "Sideways.") But I couldn’t deny the craft and skill that went into "A Serious Man," and it gradually started to work on me.  By the end, it was so black and so mean that all I could do was throw up my hands and surrender to it.  So I walked out thinking it’s pretty great even if I did hate it for a while.  Hats off to the Coen Bros — they may be cynical and black-hearted, but damn if they don’t know how to make terrific movies.

Oscar hopes: With ten best-picture slots, it’s clearly in the running. (With five … not so much.) Acting: Michael Stuhlbarg deserves best-actor consideration but might have a tough time getting it. Richard Kind is showy enough for some supporting attention, but I have my doubts.  Roger Deakins, to nobody’s surprise, ought to be on the cinematographers branch’s shortlist.  And that Roderick Jaynes guy (i.e., the Coens’ alias) is a fine editor.

Verdict: It’s timely and it’s effective and it’s epic, a Michael Moore summation of sorts. It’s also scattershot and gimmicky and very long, with the sense that it’s jumping from one topic to another rather than developing a coherent argument. (Plant closings! Underpaid airplane pilots! Derivatives! Katrina!) And it’s quite a stretch to go from what Moore actually talks about (the problems caused by Reagan-era deregulation of the financial markets) to what he insists is his premise (capitalism is evil). Much of the movie will certainly play well among those who share the man’s politics (a group that includes a lot of the Academy, and me), and it ends with a nice flourish, but there sure is a lot of histrionic side-tracking along the way.

Oscar hopes: I assume it’ll get a documentary nomination, though I don’t think that’s a complete slam-dunk. (Few things are when you’re dealing with the documentary committee.) As for its best-picture hopes, I don’t see the politics trumping the occasionally sloppy filmmaking, unless a whole lot of voters consciously try to come up with a varied slate (some indies, a popcorn movie, a foreign film, a documentary … ) as they fill out their ballots.

Verdict: I admire how Jane Campion has made a very restrained movie about passionate love in a restrained era, but I don’t feel it. Yeah, I know, maybe I’m not supposed to. Yeah, I know that the New York Times and the L.A. Times both swooned over it. But when Fanny Brawne reads John Keats’ letters to her halfway through the film, should the fervor of those letters come as a complete shock? I don’t think so. Abbie Cornish is quite good, Ben Whishaw hardly registers as Keats, and Paul Schneider steals the show simply by being so annoying. When Martin Scorsese did this passionate-love-in-a-restrained-era thing with “The Age of Innocence,” I felt the passion; this time around, I just kind of appreciated the intellectual choices Campion has made.

Oscar hopes: Period drama = costume and art director nominations. And with Cornish’s character defined by her fashion sense, the former is a particularly strong bet. Cornish herself figures to be in play for best actress. As for best picture and director, I suspect the film’s austerity makes it a long shot – and I hear that at its Academy screening, the applause was stronger for the cinematographer, art director, etc. than for the film. But ten’s a lot of slots …

Verdict: Matt Damon is remarkable. The conceit of the Ultimate Untrustworthy Narrator is fun. The humor is appropriately twisted, and appropriately deadpan. And the movie still feels long and uninvolving to me. As 2009 Steven Soderberg films go, I’ll opt for the weirder, thornier pleasures of “The Girlfriend Experience.”

Oscar hopes: Damon ought to be in the best-actor picture, though a comic performance might be a tough sell this year. I think the movie itself is a longshot at best. Marvin Hamlisch’s music, so lauded in the first round of reviews, is sprightly and entertaining, and it really calls attention to itself, which might help. Every time it started up, though, it made the movie feel like a period piece; the story’s set in 1992, but Hamlisch’s score is pure 1972. I guess that’s part of the point, but is wrenching the movie into a different era really what the music branch is looking for in a score?

“The Imaginarium of Dr. Parnassus”

Verdict: Stylish, fun, as imaginative as you’d expect, but also something of a mess. It’s admirable that Terry Gilliam found an intriguing way to finish the film after the death of Heath Ledger, and the three actors who take over parts of Ledger’s role – Johnny Depp, Jude Law and Colin Farrell – all acquit themselves honorably, though it’s undeniably frustrating that the big, climactic emotional scenes all come when Farrell’s playing the part instead of Ledger. But while I loved the look and feel and mood of the movie, it just didn’t have the heart or the magic of the two previous Gilliam/Charles McKeown collaborations, “Brazil” and “The Adventures of Baron Munchausen.”

Oscar hopes: Art direction and costumes are a possibility if the movie manages to establish a presence in the minds of voters. Beyond that, there’s probably not much chance. Ledger’s role is flashy but feels too truncated for a second posthumous nod, unless voters really, really loved giving him the Oscar last year and are determined to do it again.

Many more to come …