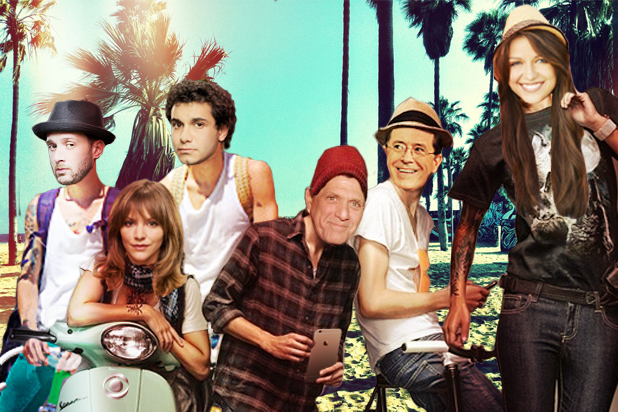 CBS has long been regarded as your grandmother’s network — a fact that even company President and CEO Les Moonves has admitted.

But fast-forward a decade, and CBS is finally getting a much-needed facelift.

With new, younger-skewing hit shows, two different online services and a fresh, über-cool late-night lineup led by the broadcaster once known as “The Tiffany Network” is going from hip-replacement to hip.

Riding that wave — possibly causing it, in part — he star of “CSI: Cyber,” the latest installment in the network’s big moneymaking franchise debuting Wednesday.

“There’s a lot of youth on the show,” Arquette toldt’s a big testament to CBS and show creators of ‘CSI.’ To have a middle-aged female lead is really interesting, too.”

The 46-year-old actress, fresh off a Best Supporting Actress Academy Award win for “Boyhood,” is something of a new direction compared to the franchise’s habit of casting middle-aged male leads: William Petersen was 47 when he took on “CSI: Crime Scene Investigation”; David Caruso, 46 when “CSI: Miami” kicked off; and, 49 at the outset of “CSI: NY.”

Three months ago, Debevoise spearheaded the launch of “CBS All Access,” a new Hulu-like streaming service that offers subscribers thousands of CBS episodes online for a monthly fee of $5.99 (while all other broadcast networks joined platforms like Hulu or Amazon, CBS decided to go it alone, essentially cutting out the middle man).

That move seems to be paying off. While CBS won’t release any numbers yet, Debevoise said, “the overwhelming majority fall in the 18-49 demo.”

“Our viewers are skewing younger than even the audience that we already have [on CBS.com],” he said. “On average, our viewers watch twice as much content as our typical CBS.com or CBS app users.”

While CBS has more viewers than all the other networks, it also has the oldest. CBS’s median age is 59.9, highest among all network broadcasters. Though to be fair, its competitors aren’t faring much better. ABC’s median age is 55.9, NBC is doing slightly better at 53.8 and Fox is at 50.5. Even The CW, known for its pubescent programming, is going through a midlife crisis with a median age of 46.6.

By comparison, the median age for “CBS All Access” is somewhere in the lower 40s, according to the network. That may not sound very young, but in today’s ever-graying TV landscape, it’s practically jailbait.

“I think CBS now has a place at the table,” Horizon Media senior VP of research Brad Adgate told TheWrap. “Now they can compete with other networks when it comes to having content that people can watch on different devices.”

In November, CBS launched another streaming venture: “CBSN,” a new, 24-hour digital news channel, in yet another attempt to tap into the “cord-never” generation known for its aversion to traditional cable viewing.

Also Read: CBS News Chief on Network's New Digital Push, Launch of CBSN and What It All Means for the Future

“There are somewhere between five and 15 million households that don’t have cable or satellite,” Debevoise said. “If you think about the fact that every household has two to 2.5 people in it, you’re talking somewhere between 10 and 30 million people.”

CBS is also making headway on its programming side. “Scorpion” — based on a real-life team of young computer geeks recruited by the government to fight global high-tech threats — has become CBS’s biggest breakout hit this year. The series, which has already been picked up for a second season, is getting lots of buzz — but the age of its audience may represent the show’s real feat.

“Scorpion” has averaged a 3.2 in the advertiser-sought 18-49 demographic per Nielsen’s most current ratings, which include Live + 7 Day (viewers who watch within seven days of a broadcast) numbers where available. That makes it the 15th highest-rated show on broadcast TV, excluding sports. Among new shows, “Scorpion” is tied for third place with Fox’s “Gotham.”

“We’re thrilled,” “Scorpion” creator and executive producer Nick Santora told TheWrap. “I watch the show with my 10-year-old, and she belly-laughs.”

While the show’s producers say they never set out to target a younger audience, their casting choices tell a different story. Although the real-life inspiration behind the show’s main character, Walter O’Brien, is close to 40, on the show the character is in his 20s, as are most of his colleagues.

CBS gave the green light to another younger-skewing show, “Supergirl” and cast “Glee” actress Melissa Benoist for the coveted role of DC Comics’ Kara Zor-El, a.k.a. Supergirl. The network was so eager to get the series up and running, it gave the show a full-season order right off the bat. Executive produced by Greg Berlanti, the king of teen superhero shows on The CW, it’s safe to say “Supergirl” will fly with younger viewers.

And then, of course, there’s The network poached the late-night talk show host from Comedy Central to take ove chair on the “Late Show” in May. CBS is banking on Colbert’s fiercely loyal — and much younger — viewers to follow him to his new home.

The network then had many scratching their heads when it picked largely unknown British actor James Corden to host “The Late Late Show.” But, Corden has at least one thing going for him — at 36, he’ll be the youngest of the current late-night hosts when he takes over for n March.

“Colbert has a pretty big presence in streaming videos,” said Adgate. “CBS will be able to benefit from a revenue perspective with the so-called ‘second screen.'”

This isn’t CBS’s first attempt to appeal to a younger audience. For years, the network struggled in that category, with mixed results.

“The Big Bang Theory” has been the No.1 comedy on network TV for years. “How I Met Your Mother,” which went off the air last season, also did well among younger viewers. But, despite all its efforts, CBS hasn’t been able to capture that cool factor.

But these days, the network is getting high marks from those who matter most: advertisers.

But, Maron says, even though CBS is heading in the right direction, she would hold off on recommending it to clients looking for a younger target audience, at least for the time being.

“NBC is certainly much younger than CBS, and even ABC has some hot shows that appeal to younger audiences. Fox has traditionally always been the younger-skewing broadcast network, but they don’t really have a ratings hit this year with the exception of ‘Empire,’ so the dollars that you were using towards Fox are now shifting more towards specific shows on NBC and ABC,” Maron said.

CBS’s official mandate hasn’t changed. Execs say they’re still going for the “Big Tent” approach, with programming that can appeal to as many viewers as possible.

But at the end of the day, CBS says it’s keen on changing with the times.

“You can’t ignore the fact that everyone has Internet connectivity and devices they want to view content on,” Debevoise said. “We want to make sure our content is available on those devices.”

“Because the hackers and computer scientists and those who work at the FBI and private cyber-investigation companies are young people, I think we’re tapping into a world where we’re reflecting the age group that work at cyber crime,” Veasey said. “Most hackers we’ve met, their ages are from 12 to 25, so we hope they tune in — they’ll probably tune in to see if we got it right.”

About whether the show will appeal to a younger demo overall, Veasey said: “I hope so … From your lips to God and Nielsen rating’s ears.”