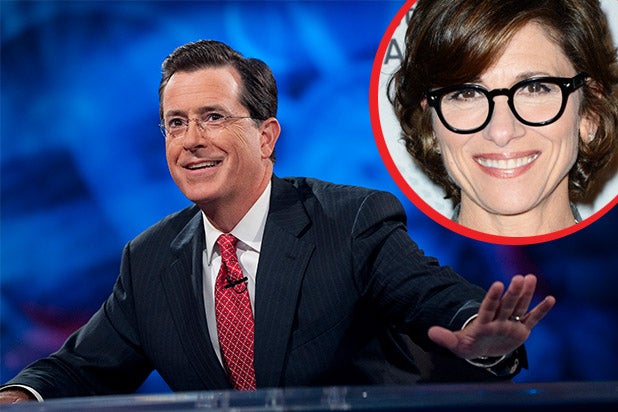 Stephen Colbert‘s agent reached out to CBS about his taking over “Late Night” the day after David Letterman announced his retirement, and Colbert quickly emerged as the top candidate, CBS entertainment chief Nina Tassler says.

“We moved pretty quickly, we had a lot of internal conversations, and we figured this was a great opportunity for us,” she told TheWrap.

“The Comcast-Time Warner deal came together in about six days, so I’d say that we followed form,” said Tassler, who added that she’s a regular “Colbert Report” viewer.

“I love his show and have been a fan for many, many years,” she said.

A Comedy Central insider confirmed that Colbert broke the news soon before CBS announced it.

Colbert will do his CBS show as himself, not as the bombastic character he played on Comedy Central’s “The Colbert Report.” But she said she wasn’t worried about him losing his edge.

“I think that there is nothing but extraordinary excitement and support for whatever Stephen is going to bring to the 11:30 time period. He’s incredibly inventive. He is a classic storyteller, he’s an extraordinary interviewer.”

The negotiations began soon after the “#CancelColbert” movement on Twitter, in which hashtag activists objected to Colbert making a remark that was perceived as insulting to Asians. It was taken out of context and involved one of his satirical characters.

Tassler said she has not spoken to Colbert about the dangers of his satire being misunderstood as he goes before a wider audience.

“I haven’t talked to him at all. This is a man who knows how to conduct himself with grace and style and having someone who is so skilled at navigating a situation like that — obviously he is well-equipped to master broadcast television,” she said.

TheWrap inquired about whether anyone else — such as CBS star Neil Patrick Harris — was also in the running. She declined to talk about any other contenders.

“We talked about everyone and Stephen’s name just rose to the top very quickly,” she said. “I can’t give you a number, but it was a pretty robust list.”

TheWrap also asked if she hopes to keep Craig Ferguson in the 12:30 hour.