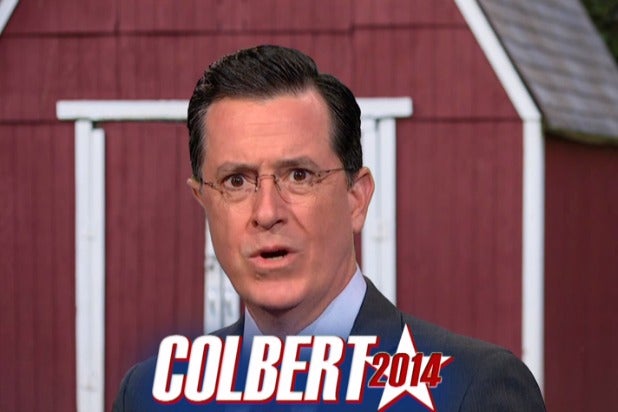 I believe that Stephen Colbert‘s show should be canceled over an ostensibly racist tweet.

And also, look at me: I’m not racist.

We all agree that we should call out actual racism, loudly and often. But I go a step further, ignoring nuance, context and logic, to ensure that I call out even non-racism as racist. That’s how you know I am truly, noticeably not racist.

As a white person, I never experience racism of any kind. But I do my part to combat racism by being offended on behalf of other races. There are many ways I could increase equality in America: Teaching or volunteering at New York or Chicago’s appallingly segregated schools. Giving to charities. Asking lawmakers to fix a justice system that imprisons African-Americans at higher rates than whites.

But I do none of those things. Rather, I do the thing most personally convenient to me: I go on Twitter a lot, and accuse other white people of being racist. Especially if lots of other people are doing it too, with a hashtag like #CancelColbert, so we have Twitter strength in Twitter numbers.

Nothing proves you’re not racist like calling other people racist.

To which you may say: Wait a minute, Tim. It sounds like all you’re doing is adding to an opportunistic pile-on in a shadow reality when you could be out tutoring kids.

To which I say: Yes, but how many people would see me tutoring? A handful of other volunteers? On Twitter, hundreds or thousands of people can see how not-racist I am.

That’s a great point, you might say. But… isn’t it not about you? When you raise your hand on Twitter, trying to make people see how not-racist you are, how are you helping anyone else?

To which I say: Why are you defending racists?

Oddly, none of the people I ever rise to defend ever reach out to tell me how much they appreciate it. (Actually, I don’t so much “rise” as “sit on my couch,” but never mind.) And no, no one ever says I seem like one of the cool white people who really gets it.

But I do gets lots of retweets and favorites from other white people, lending their voices to say that they, too, are not racist.

Let’s face it: There’s nothing worse in today’s society than being called racist. It’s even worse than actually being racist. So it’s important that we show our non-racism by calling out even non-racists like Colbert, who plays a character who is a tone-deaf buffoon, and, accordingly, says things that are tone-deaf and buffoonish.

The more sensitive and finely tuned my ear for racism, the more obviously not-racist I am. Being able to detect racism even where none exists is one of the most elevated levels of not being racist.

Also read: Why Does Rush Limbaugh Even Want to Say the N-Word?

The best part of my campaign against racism is that once in a while, I even criticize someone who is actually racist. There are a lot of these people.

Yes, I suppose I could focus my heroic efforts on them and the damage they do — by registering voters, staging boycotts, or doing any number of other concrete, practical things. But why would I invest time in something hard when I can reach a much larger audience while eating my Cheerios at home?

Granted: My scattershot, meaningless, BB-gun approach hits lots of the wrong people. It may even sound like I’m crying wolf, which makes my voice less credible when real racism arises.

But no one will say that, because they don’t want to be misunderstood and grouped with the actual racists.

Disagree with me? Guess what that makes you.