It’s been 15 years since what might be the biggest Oscar snub in history, a decade-and-a-half since the injustice that changed Academy rules and helped lead to the creation of a new branch within AMPAS.

“Hoop Dreams” came out in 1994. It celebrated its 15th anniversary Wednesday night at a theater in Chicago named after Gene Siskel, one of two critics whose support of the documentary was crucial to its success. The colleague who championed the film alongside Siskel, Roger Ebert, saluted what he called “the great American documentary” in a blog post the following day.

In his blog, Ebert spends most of his time championing the film and telling its story, which dealt with a pair of teenaged basketball players from the streets of Chicago. But he also delves into the film’s Oscar snub: expected to win the documentary-feature Oscar and possibly even secure a best-picture nomination, it didn’t even receive a nomination in the doc category. 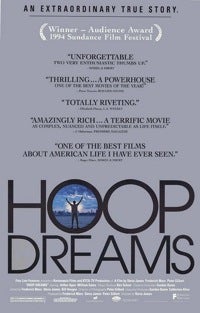 According to Ebert, the “shameful” snub came about when volunteer members of the documentary committee voted via flashlights to turn off the movie only 15 minutes into its screening.

I looked into the “Hoop Dreams” snub when I was doing research for my Oscar book, “The Big Show,” and found a different story. Not only was the film watched all the way through by voters, but it received more perfect scores than any other documentary in the competition. Its failure to be nominated was caused not by impatient viewers with flashlights, but by a small cabal of voters manipulating the process.

At the time, the Academy did not have a documentary branch. Members of all the other branches were invited to join the committee that viewed all eligible films in the nomination process – but since 63 documentaries had qualified, the committee required members to attend screenings every Tuesday and Thursday night for three months.

The result was a committee of Academy members with lots of free time – i.e., a group heavily skewed toward the aging and retired. They were “a very eccentric group of individuals,” admitted the Academy’s executive director, Bruce Davis.

Members were issued small flashlights when they entered the screening room; 15 minutes after each documentary began, they were given the option to stop the screening by switching on their lights. If three-quarters of the members did so, the movie was stopped; if not, a new vote was taken every 10 minutes, and the power to end the screening shifted to a simple majority.

“A lot of very good movies were turned off because people didn’t want to spend the time,” said director and committee member Chuck Workman. “These people were smart and they were dedicated, but their documentary experience was basically older films or films on PBS. There was a whole world of nonfiction films going on … that they just kind of missed.”

Once a movie was screened – and “Hoop Dreams” was indeed viewed all the way through – the committee members would discuss it, sometimes heatedly. (I hear one member routinely broke into tears during these discussions.) Then they’d fill out ballots, giving the film a numerical rating.

When “Hoop Dreams” wasn’t even nominated, then-AMPAS president Arthur Hiller announced that he would take “a close, hard look at the procedures of the documentary committee.” Bruce Davis didn’t say anything publicly, but the executive director took what was for him an unprecedented step: he quietly asked Price Waterhouse to send him the complete results of the voting.

The accounting firm prepared a rundown that left out the names of the individual voters, but showed how each voter had scored each film.

Talking about the results a decade later, Davis said that the rundown was clear: “a small group of members gave a zero to every single movie except the five they wanted to see nominated. And they gave 10s to those five, which completely skewed the voting.”

(Later reports say that the committee actually ranked the docs on a scale of four-to10 rather than zero-to-10.)

Davis wouldn’t mention the names of any affected films, but neither did he dispute my conclusion that he was talking about “Hoop Dreams.” “There was one film that received more scores of 10 than any other, but it wasn’t nominated,” he said, choosing his words carefully. “It also got [minimum scores] from those few voters, and that was enough to push it to sixth place.”

In the aftermath of the Oscar show that year, the Academy eliminated the flashlight system and the pre-vote discussions. They split the committee in two, so that the time commitment wouldn’t be so substantial.

And crucially – though at the time the significance was lost on people who didn’t know how “Hoop Dreams” lost its nomination – they altered the scoring system so that voters would rate each film on a scale of six to 10, thus reducing the damage that a rock-bottom score could do.

Six years later, the Academy created a separate documentary branch, putting the process in the hands of documentary filmmakers rather than volunteers with lots of free time.

And now, Ebert points out in his anniversary celebration of the film, most people don’t even remember which film did win that year.  For the record, it was “A Strong, Clear Vision.”