TheWrap awards magazine: Spike Lee, Colman Domingo, Delroy Lindo and others pay tribute to the charismatic actor who is picking up posthumous nominations and awards

In the fall of 2014, Chadwick Boseman sat in the patio restaurant at the Sunset Marquis Hotel in West Hollywood. At 37 years old, with five movies under his belt, he was tired from a European tour to promote his performance as James Brown in “Get on Up” but energized at the way his career had exploded in the last couple of years: a breakthrough role as Jackie Robinson in “42,” then “Get on Up,” and next up a deal to play a Marvel Comics character, Black Panther, in a series of films.

“Opportunities like this don’t happen to everybody, and there’s no good reason why (they) should have happened to me,” he said with a grin. “I feel blessed.”

With Jackie and James under his belt, Boseman admitted that he wasn’t exactly looking to play another real person (though he later agreed to play Thurgood Marshall in a 2017 film about the Supreme Court justice’s early legal career). “Another biopic might pop up that I have to do, but before that I have to do a few other things, if not 10 other things,” he said, and then paused.

“And if we make it that far, I’ve already won anyway.”

From that moment until his death of cancer in August at the age of 43, Boseman made exactly 10 more movies, showcasing his grace and gravity and remarkable physicality. Those 10 would range from “Marshall” to the four Marvel films in which he played Black Panther, and they would culminate in a pair of standout 2020 releases that cemented his film legacy: Spike Lee’s “Da 5 Bloods” and George C. Wolfe’s “Ma Rainey’s Black Bottom.”

For Lee, that résumé was a key when he cast Boseman in “Da 5 Bloods” in the role of Stormin’ Norman, the leader of an all-Black squad during the Vietnam War. “Let’s look at the roles he played: Jackie Robinson, James Brown, Thurgood Marshall and the Black Panther,” Lee told TheWrap in a recent interview. “When Kevin Wilmott and I wrote Stormin’ Norman, we wanted him to be this mythic character. So think about the names I just said. (Boseman) just shows up, people buy that he’s mythic already.”

Lee’s film and “Ma Rainey’s Black Bottom” have turned the 2020-2021 awards season into an extended tribute to the impact of this charismatic actor who was born in South Carolina and worked in Hollywood for a decade before detonating with a string of iconic roles. Less than six months after dying unexpectedly of colon cancer, a disease he’d hidden from almost everybody since he received the diagnosis in 2016, Boseman’s remarkable performances in “Ma Rainey “and “Da 5 Bloods” won him the Actors Tribute at this year’s Gotham Awards, along with an array of critics’ prizes and the Golden Globe for Best Actor in a Motion Picture – Drama for “Ma Rainey.” He received a record-breaking four film nominations at the Screen Actors Guild Awards; two of them came for his individual performances in “Da 5 Bloods” and “Ma Rainey” and two as part of those films’ ensemble casts. 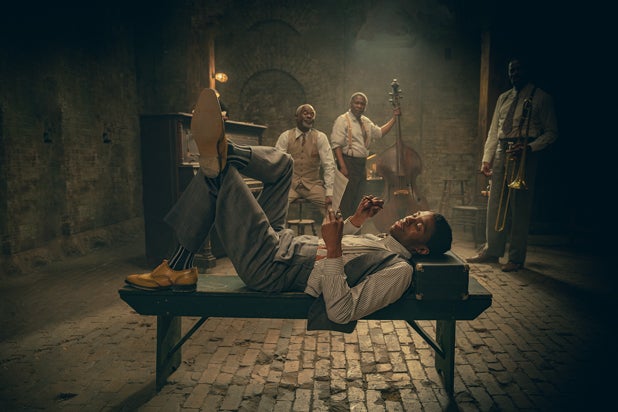 “He was a great teammate,” said “Ma Rainey” co-star Colman Domingo — who, like everyone else on that film, was unaware that Boseman was fighting cancer during the 2019 shoot. “There was not one sign of illness. I look at him as my colleague and friend, but I admire him even more because he not only took care of himself, he protected us as well. He just wanted to show up and do the work.

“I think that’s a great lifeline for any artist: If they’re struggling, it’s like, ‘I’m going to hang onto this work, and it’s going to move me forward.’ He was eager, funny, warm, always ready to go for another take — what an incredible human being.”

Delroy Lindo, who starred in “Da 5 Bloods” while Boseman appeared in flashbacks to the war, found a different word when talking about his experience with Boseman. “Whether Chad passed or not, I think I would be referencing the grace that I witnessed him exhibit,” he said. “Grace as an actor, as a human being, as a man. And he brought what I’ve come to identify for myself as grace and grit and determination to the work effortlessly.”

In both films, the work was grueling at times — long, charged monologues in “Ma Rainey,” major action scenes in the humid Thailand climate in “Da 5 Bloods.” In that latter film, Lindo remembered, Boseman showed up ready to work, jumping right in with a crucial and emotionally charged scene in which Stormin’ Norman, who was killed in Vietnam in the 1960s, returns in a vision to confront Lindo’s character, Paul, about the circumstances of his death.

“The scene by the stream was his first day,” Lindo said. “The fact that we came together and worked as we did on his first day says everything you need to know about who Chadwick Boseman was as an actor. He was monumentally prepared, as was I — but I had been working on the film for five or six weeks at that point, and it was his first day. He was intensely prepared and he held up his side of the screen, profoundly so.”

“He had no catching up to do,” Lee said. “None whatsoever.”

Also Read: Daniel Kaluuya on the Legacy of Chadwick Boseman: 'That's a Man That Lived for Us' (Video)

That scene, incidentally, begins with Boseman standing in a clearing in the jungle, his rifle held aloft, bathed by light filtering through the trees. “We found this location and it was not lit,” Lindo said. “That shot where he’s standing with his rifle in the air and that shaft of light came down — Spike didn’t plan that. That was gifted to the production. Chadwick standing in that shaft of light happened.”

“It was light from heaven,” Lee added. “And he was almost a Greek statue, the way he was standing.” 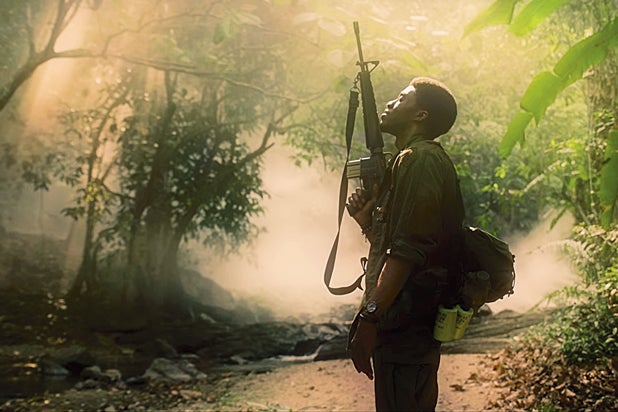 Colman Domingo has his own indelible memories of a searing scene with Boseman, in which an exchange between their two characters in director George C. Wolfe’s “Ma Rainey’s Black Bottom” erupts into an anguished denunciation of religion: “God ain’t never listened to no n—–‘s prayers,” Boseman’s Levee shouts. “God take a n—–‘s prayers and throws them in the garbage.”

“In that moment there was something happening — that’s all I can say,” Domingo said. “I don’t know what was happening in particular with Chad, but when he got to the deepest part of the material, it was drawing on something personal. I still can see it. I see Chad looking away, putting his hand on his head, and I was afraid that George was going to call cut. And I was like, ‘We have to go wherever this is.’ So I started yelling at him at the top of my lungs saying, ‘Tell me, tell me, tell me!’ And then he turns and delivers the rest of that speech to me.

“I’m trembling, he’s trembling. My action is to punch him in the face, he pushes me, George calls cut and immediately we just embraced each other and cried. At the time I didn’t know what we were crying for, but I knew there was something in the room, something we both felt that the text was bringing up in our own lives. We held onto each other because we knew that we broke through some cracks, probably, in our own psyches. It was truly one of the most impactful scenes I’ve ever had in my entire career.”

Also Read: Chadwick Boseman's Final Tweet Had the Most Retweets of 2020

The “Ma Rainey” cinematographer, Tobias Schliessler, said there were times during the filming when he too cried watching Boseman’s performance from behind his monitor. “And then to know what he went through with his illness–can you imagine how exhausting that must have been for Chadwick, to get himself into the emotional space for those scenes?”

During the shoot, Schliessler added, he rarely spoke to Boseman. “As with Viola (Davis), he got so into his character that there was hardly any interaction between myself and him,” he said. “But when we wrapped the movie, it was 3 o’clock in the morning. Everyone was giving handshakes and congratulating each other on finishing the film. And Chadwick comes walking towards me and gives me a big hug. And he mentioned, specifically, a few things I’d done that he liked. He was aware of everything all the time.” 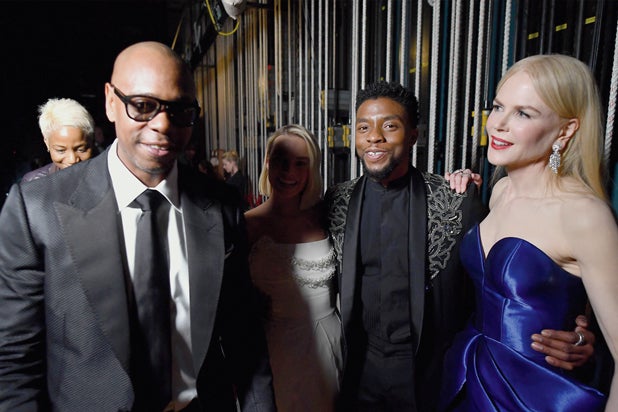 In TheWrap’s conversations with Boseman over the years, he was also aware of the opportunities he’d been given to change the way in which Black artists and craftsmen were viewed in Hollywood. “What I have always wanted to do is to break those barriers in every way that I can,” he said in 2018 as “Black Panther” emerged as a $1.3 billion global box office hit. “If I’m looking at something, I think, ‘How do I break a barrier in this role? What can I bring to the table that’s different?’

“That’s my manifesto. As an African American artist and filmmaker, that’s my goal, every time. I just feel blessed to be living in a time period where we can have a ‘Creed,’ where can have a ‘Black Panther,’ we can have a ‘Get Out.'”

He was thinking about those issues, he said, long before there were projects like those — as far back as 2003, when he was hired by the ABC soap opera “All My Children” but wasn’t comfortable with his role of a stereotypical young Black thug. “I remember going home and thinking, ‘Do I say something to them about this? Do I just do it?’ And I couldn’t just do it. I had to voice my opinions.” When he did, he was fired — but the character was nonetheless softened to some degree for subsequent actors, who included his future “Black Panther” co-star Michael B. Jordan.

“The good thing about it was, it changed it a little bit for (Michael),” Boseman said. “They said, ‘You are too much trouble,’ but they took my suggestions, or some of them, and passed them on. And for me, honestly, that’s what this is about. It’s not about me, it’s not about him.

“As an artist, you educate the people you work with — producers, casting directors, various people on the set are educated by the experience of working with you. When they go to the next thing, they already know a little bit more about you from a cultural perspective. So when they deal with the next person, it’s not the same preconceived notions, it’s not the same pitfalls.

“And that’s been set up by Sidney Poitier and Denzel Washington and Laurence Fishburne and Sam Jackson and Don Cheadle — all those people are educating along the way. We’re doing that every time we do a film — and we’re educating our audiences, too.”