Jerry Harris, star of the Netflix docuseries “Cheer” was sentenced to 12 years in federal prison for soliciting sex from minors on Wednesday.

After Harris is released from imprisonment, he will be on a “supervised release” for eight years, according to sentencing handed down in a Chicago courtroom by U.S. District Court Judge Manish S. Shah. Harris was also ordered to pay cumulative fines and restitution amounting to over $45,000. 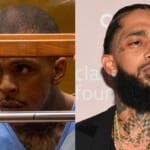 Harris, who rose to national prominence on the Netflix docuseries “Cheer,” was arrested by the FBI in September 2020, after a pair of twin brothers accused him of sending one of them sexually explicit messages and requesting nude images over social media starting when they were 13 years old.

During the trail, the lawyer representing the two boys said their mother was extremely influential in the case, as she provided “evidentiary proof of the manipulation, sexual harassment, abuse, and exploitation that her sons had suffered.”

Season 2 of “Cheer,” which was released in January, addressed the criminal charges against Harris and included interviews with the twin boys who accused him.