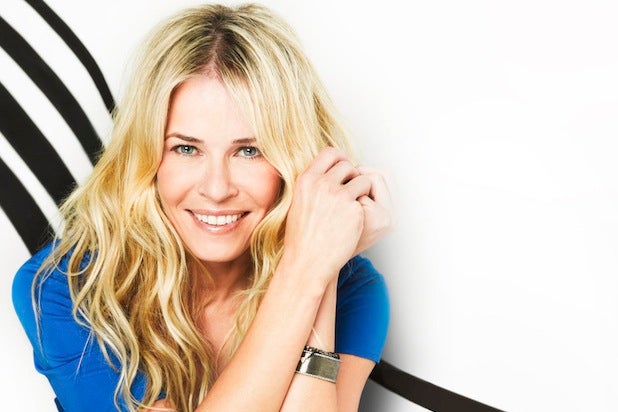 E! late-night host Chelsea Handler has found a new home at Netflix, finally closing a deal that TheWrap first reported she was working on back in early-April.

Under the new pact, Handler will star in and produce a talk show, a stand-up special and four docu-comedy specials for the streaming television service.

“The Internet has disrupted many of the conventions of traditional television and together with Chelsea Handler, Netflix is looking forward to reimagining the late night talk show for the on-demand generation, starting with the late night part…” said Netflix’s chief content officer, Ted Sarandos, in a statement.

He added, “Chelsea has built a huge following on tour, on nightly TV and through her best-selling books, and we can’t wait to introduce her breathtakingly honest and irreverent voice to our global membership.”

E! owns the format for late-night show “Chelsea Lately,” but Netflix stresses that her new talk show for them will be an updated format that will still feature her take on pop culture and her unique interviewing style. It’s set to debut in early-2016.

A Netflix representative told TheWrap that it’s too early to say how frequently Handler will shoot the new talk show. An individual close to Handler previously told TheWrap that she wanted to do a weekly show.

Handler will kick off the first comedy special of the deal on October 10 with a stand-up special from her current comedy tour, “Uganda Be Kidding Me.” She’s shooting the special in Chicago on Friday, June 20 at the Harris Theater.

See video: Chelsea Handler Addresses CBS Talks: ‘I Would Never Be on a Regular Network’

She’ll then produce four new docu-comedy specials in 2015. They’ll follow the comic as she searches for a better understanding of subjects, including NASCAR, politics, Silicon Valley, and the NBA draft.

Handler will produce the Netflix projects via her production company Borderline Amazing alongside partners Tom Brunelle and Brad Wollack.

“If I was going to continue working in this industry, I knew I had to do something outside the box to keep myself interested,” Handler said.

“I wanted to sit with the cool kids at lunch, so I approached Netflix to make sure they were as cool as I thought they were, and when I confirmed my suspicions, like with any other future lover, I made my move. I’m more excited than I’ve been in a while, and the team at Netflix is the most forward thinking, alert group I’ve sat down with in ages. No offense to the Shahs Of Sunset.”

The comedian will wrap her contract with E! with a final episode of “Chelsea Lately” airing on August 26 – four months earlier than her contract was supposed to expire. She’ll continue to produce Ross Mathews’ weekly talk show, “Hello Ross!,” for the network.

Handler, 39, announced her intention to leave E! back in March, telling Howard Stern on his SiriusXM show that the network wasn’t doing much to raise her show’s ratings.

“They don’t know what they’re doing [at E!]. They have no ideas. It’s a failure,” she told Stern.

As TheWrap first reported, the comedian was also in discussions with CBS for a possible late-night spot or syndicated talk show in early-April, in addition to being in early talks with Netflix.

Currently, E! has not announced a late night replacement for Handler’s show. While Mathews would seem to be E!’s best bet at this point, the network has announced that it’s in development on a new late night show.