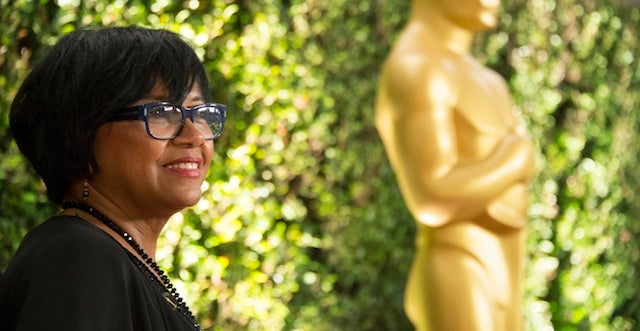 Cheryl Boone Isaacs has been elected president of the Academy of Motion Picture Arts and Sciences, the Academy's Board of Governors announced on Tuesday night.

The election, which took place at the Board of Governors meeting on Tuesday, makes Isaacs only the third woman to become AMPAS president in the organization's 86-year history, and the first African-American to hold the position. Hers is a notable achievement in an organization that in recent years has come under fire for being predominantly white and male. She is also the first Academy president whose election was announced by AMPAS on Twitter while the governors were still voting on other offices.

Isaacs is one of a record total of 14 women on the 48-member AMPAS board, and its only African-American.

A longtime marketing and publicity executive who represents the Academy's Public Relations Branch, Isaacs, 63, has consulted on recent Best Picture winners "The Artist" and "The King's Speech" as the head of CBI Enterprises. She has also served as president of theatrical marketing for New Line Cinema and as executive vice president of worldwide publicity for Paramount. Her earlier publicity campaigns include Oscar winners "Forrest Gump" and "Braveheart."

Last year, Isaacs and her fellow Public Relations Branch governor Rob Friedman were the only two governors to also receive votes in the balloting that elected Hawk Koch AMPAS president. She was elected the organization’s first vice president that night, and later produced the Academy's 2012 Governors Awards.

Isaacs and Friedman were considered the two frontrunners for the position, which went to the first candidate to receive more than 50 percent of the votes from the Academy’s 48 governors, 10 of whom were elected to the board for the first time last month. (Only governors who attended were eligible to vote.)

While Friedman’s full-time job as co-chairman of the Lionsgate Motion Picture Group would have made it almost impossible for him to devote as much time to the presidency as Koch or his predecessor, Tom Sherak, Issacs is considered likely to be able to focus on her Academy duties.

Robinson and Lasseter have served as officers before, while Kurland and Engleman have not.

Under Koch, the Academy held its first open membership meeting, a May gathering in Beverly Hills that was linked via video to similar events in New York and the Bay Area. It also moved forward on the design and fundraising for the Academy Museum of Motion Pictures at the Los Angeles County Museum of Art, and ended limits on new members to invite far more people to join the Academy than it had done in more than a decade.

While the first job of a new Academy president has historically been to choose the producer of the Academy Awards show, Koch was the first president to take that choice away from his successor. With the approval of the board, he rehired this year’s producers, Neil Meron and Craig Zadan, to return for next year’s show.

Isaacs is the second representative of the Public Relations Branch in the last four Academy presidents. Sid Ganis, who served four terms between 2005 and 2009, was also from that branch.

The first woman to have served as Academy president was actress Bette Davis, who only held the job for two months in 1941 before resigning, reportedly because of disagreements with the board over the style of the wartime Oscars ceremony. The only woman to complete a term as president was writer Fay Kanin, who served four terms in the early 1980s.

Presidents are elected for a one-year terms, but the sitting president is virtually always re-elected. Because she returned to the board after a hiatus in 2011, Isaacs is eligible to serve the maximum of four consecutive terms.