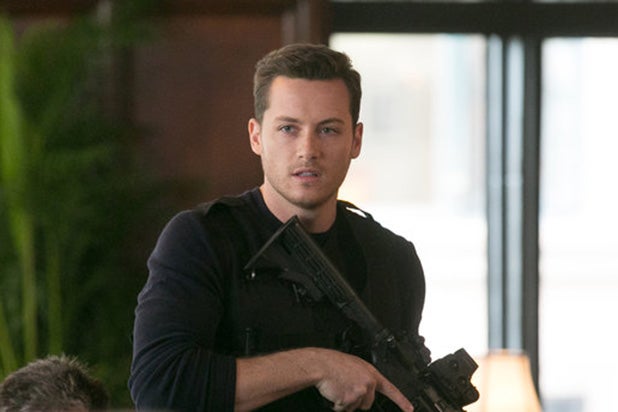 With the recent spate of news calling attention to police brutality and race relations in America, including the death of Freddie Gray and the subsequent protests in Baltimore, Soffer feels the pressure as an actor to use his position to portray police officers in a fair and positive light.

“For every story we hear in the news, we’re not giving credit to a hundred other stories where a cop just saved a life,” Sofffer said. “I’m very proud to be a part of this show and portray the cops that I know in the light that they deserve.

In an interview with TheWrap, Soffer spoke about that pressure, the show’s major crossover episodes and who else on the show he thinks deserves an Emmy.

TheWrap: What was the toughest thing you had to do this season?
Jesse Lee Soffer: Emotionally, the toughest scene was probably when Nadia died. When we found her body … We find her body in an episode of “SVU,” and that was one of the most emotionally difficult scenes, because not only are we losing the character and dealing with that stuff in the show, but we’re also saying goodbye to our friend who we’ve worked with and isn’t going to be on the show anymore. So that was really tough.

What was the most fun thing you got to do this season?
I love doing fight scenes. There was a great fight scene in, I think it was episode 19. Voight and Halstead are trying to save this kid’s life, and drug cartel guys are trying to kill them … I got to do a pretty gnarly fight scene with one of these guys in the living room, kind of Jason Bourne-style. I really enjoy that stuff.

Let’s assume that somebody has never seen your show. What would you say to persuade them to watch it?
I would tell them that it’s not your average procedural. It’s not a procedural, in fact. It’s a high-impact, high-energy, high-velocity hybrid show. We’re chasing down the bad guys like in “Hill Street Blues,” but the relationships and kind of going deeper into the characters’ lives than you’d see on a normal cop show … We don’t leave any stones unturned.

Who else on your show really deserves an Emmy, and why?
Everyone on our show does great work. Elias Koteas has done some phenomenal stuff and is definitely deserving of an award. Sophia Bush has done some great stuff at the end of the season with her character dealing with Nadia’s death. And obviously Jason Beghe, our fearless leader. And he is truly a fearless leader. He’s always so strong that he deserves an Emmy, absolutely.

Are you a binge-watcher, or a once-a-weeker? What was the last show you binged?
I definitely binge watch. My schedule is so inconsistent and crazy and hectic that if I get a chunk of time, it’s like “Oh sweet, I have three hours, I’m going to watch three episodes of ‘Peaky Blinders’ right now” … I went straight through both seasons of “Peaky Blinders” in about a week. Not even, I think it was maybe three days. It was crazy, I went right through it.

If you could add any new category to the Emmys, serious or silly, what would it be?
Maybe Most Versatile. I think there’s so many actors out there that we see and we know as one thing, but are capable of so much more … Brian Geraghty on our show comes from a big film background, and he has played all sorts of different characters. He’s been in so many movies and shows. And on our show now he’s playing the blue collar, Boy Scout tough guy and it’s a totally new look on him and he’s doing a great job.

Also read: Sophia Bush Remembers Google Exec Killed in Mt. Everest Avalanche: 'One of the Great Loves of My Life'

As an actor playing a police officer on TV, what has your experience been like with the recent bouts of tension between the police and the rest of society? The situation with Freddie Gray in Baltimore, for instance.
It’s an interesting situation to be in to play a cop on TV and to know so many police officers through our training and our advisors. And to have the obligation and the responsibility of portraying them in a heroic light alongside all of this stuff in the news. The men and women that I’ve worked with on the police force are some of the most honest, heroic and pure human beings I’ve ever met.

For every story we hear in the news, we’re not giving credit to a hundred other stories where a cop just saved a life. Or put his or her life on the line. Or has just changed someone’s day, solved a problem, or done something amazing for the community … I’m very proud to be a part of this show and portray the cops that I know in the light that they deserve.