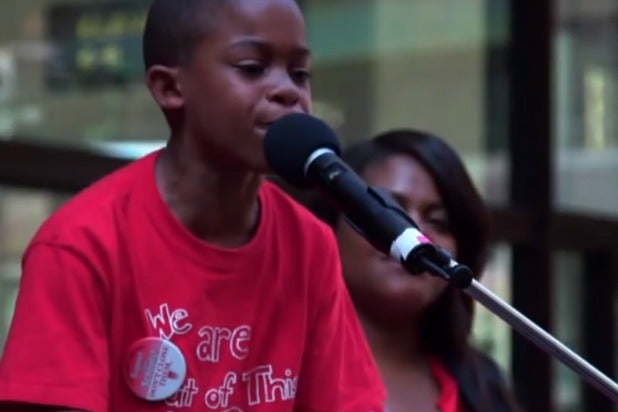 The filmmakers behind that masterful Sundance Channel series, Marc Levin and Mark Benjamin, have joined with Robert Redford on “Chicagoland,” which explores the problems facing America’s third-largest city. In “Brick City,” the blueprint for the new show, Levin and Benjamin dissected Newark, N.J., a once-hopeless place that has made real improvements since “Brick City” first aired in 2009.

Also read: ‘Brick City': What Reality TV Should Be (and Mark Zuckerberg, Too)

“Brick City” is probably the best docuseries I’ve ever seen, and while “Chicagoland” is good, it doesn’t captivate in quite the same way. The problems may have more to do with the nature of the cities than anything the filmmakers have done. Chicago’s problems seem unusually entrenched, and difficult to solve.

Chicago and Newark face many of the same troubles: many failing schools, gangs, and violence. Almost all of the problems involve children.

Chicago, unlike the predominantly black and Latino city of Newark, is shockingly segregated. Redlining in the 1950s and ’60s led to hellish high-rise housing projects, almost impossible for police to properly patrol. In the 1990s, the towers came down. But that created a new, unforeseen problem.

The handful of gangs that used to run the city have now splintered into about 70 gangs, or cliques. In some parts of the city, a different gang rules every few blocks. That means kids walking to school have to endure a gauntlet of teenage gangbangers who will beat or shoot them just for coming from the wrong place.

Walking to school requires tactical planning — a lot to ask of a six-year-old. Some first-graders don’t make it through the gauntlet unscathed.

There’s a lot to like about “Chicagoland,” including its scope. It moves effortlessly from streets to council meetings and boardrooms. It’s gorgeously filmed. The maps it uses to illustrate data points are as pretty as they are helpful.

But a lot of the time it’s hard to figure out who or what to root for.

With “Brick City,” we had people to cheer at every turn, starting with Cory Booker, the mayor who lived in a housing project and mentored three kids who at once point had threatened to kill him. The show also had low-profile heroes like a reformed gangbanger teaching girls not to repeat her mistakes, and a teacher who taught boys to tie ties – because their fathers weren’t around to show them.

At the center of “Chicagoland” is Rahm Emanuel. He may be very smart, but he doesn’t project the heart that Booker does. His brother Ari is the CEO of super agency William Morris Endeavor, which happens to represent Levin and Benjamin. That may have helped them gain access, but their portrayal of the mayor isn’t hagiography: He can come off as glib, especially when he rattles of talking points in the face of emotional protests.

The series begins last spring, as Emanuel planned to shut down 54 underperforming schools. He notes the depressing dropout rates for young black men, and pledges to fix a system that isn’t working. I didn’t feel like I got enough information from the show to form an opinion on whether the schools should close.

Lucky for Emanuel, his main critic comes off pretty terribly. Chicago Teachers Union president Karen Lewis makes the reasonable point that there will be more violence if kids need to travel further for school. But she makes it in the most unreasonable way possible, dubbing Emanuel “the murder mayor.”

Fortunately, the show demonstrates that there are thoughtful people on both sides.

One union member notes Emanuel’s gift for fundraising — he helped elect Bill Clinton and Barack Obama, as well as himself — but thinks the mayor works for the rich. He wonders if anyone in Emanuel’s circle sends kids to public school. (One of the show’s most surprising statistics is that only 9 percent of the city’s public school students are white.)

The most eloquent speaker on the show is a 9-year-old, Asean Johnson, whose mother is in the union. He speaks passionately at public meetings, though it’s impossible to say if he’s a prodigy, or repeating what his mother tells him to say. Probably both. His act is, to be honest, a little scary.

At least we have one clear-cut hero: High-school principal Elizabeth Dozier, who at one point breaks a shoe chasing gang-affiliated kids away from her campus. She mentors ex-gang members, patrols the halls, and somehow maintains a sharp sense of humor.

We also see a familiar face from “Brick City”: Police superintendent Garry McCarthy, who previously worked in Newark. At one point he says he’s trying to save the world, and Chicago. Someone asks which part.

“Chicagoland” deserves credit for not rounding some characters up to heroes and others down to villains just to get us more invested. But it oversimplifies in other ways. We don’t get much evidence one way or the other about whether the schools should be shut down. And the show features annoying, tough-guy narration it doesn’t need.

It’s worth watching to understand the problems facing a great American city — if not how to fix them.