An arrest has been made in child rape case that led a 10-year-old Ohio girl to seek an abortion in Indiana earlier this month in a case that conservative politicians and media outlets criticized as unproven.

The Tuesday arrest of Gershon Fuentes, who police say confessed to the rape, in turn put a spotlight on conservative claims that the rape was fake news. This week, Fox News’ Jesse Watters questioned the assault, stating that there was no evidence into an investigation of a child rapist. Watters’ critique joins other conservative outlets and politicians who have criticized the case, as Ohio Attorney General Dave Yost said in a Fox News interview that his office heard “not a whisper” of the case while The Wall Street Journal published an opinion piece titled “An Abortion Story Too Good to Confirm.”

Following the news of the arrest, Yost amended his previous comments, issuing a statement that said, “We rejoice anytime a child rapist is taken off the streets.”

The Wall Street Journal posted the following editor’s note to the top of its editorial:

Editor’s note: The Columbus Dispatch reported Wednesday, a day after this editorial was published, that a Columbus, Ohio, man has been charged with the rape of a 10-year-old Ohio girl who traveled to Indiana for an abortion. The Dispatch reports that Columbus police were made aware of the pregnancy through a referral to local child services by the girl’s mother on June 22. An editorial correcting the record on the case was published Wednesday evening.

The paper has not, however, retracted the editorial nor apologized.

Among the Journal’s critics was Geraldine Brooks, a former foreign correspondent for WSJ, who said on Twitter, “This morning the Wall Street Journal published a noxious editorial doubting the existence of the 10 year old rape victim who had to be taken out of Ohio for an abortion. This afternoon the alleged rapist was arrested. Someone at the Journal should be fired.”

Earlier this month, just days after the reversal of landmark abortion rights case Roe v. Wade, a 10-year-old Ohio girl traveled to Indiana to get an abortion since she would have been denied in her home state. In Ohio, along with many other states, Roe v. Wade’s reversal kick-started the state’s “trigger law” that banned abortions after six weeks.

After news broke of the 10-year-old’s story and gained international attention, there was a range of responses from conservative leaders and outlets. Yost’s comments that Ohio police had not received a report of a rape of a 10-year-old girl along with The Wall Street Journal Opinion article — that calls the case an “unlikely story from a biased source that neatly fits the progressive narrative but can’t be confirmed” — questioned the truth of the case.

On the other hand, South Dakota Gov. Kristi Noem shared that she thought it was a “tragic situation” duty an interview on CNN in July. Despite saying, “I don’t believe a tragic situation should be perpetuated by another tragedy,” a phrase often deployed by anti-abortion activists, when pressed about if abortion should be allowed in a case such as this one, Noem said that the decision is up to “the doctors, the family, the individuals closest to that [situation]” and “the legislators closest to the people” they govern. 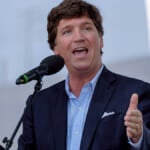 Also Read:
Tucker Carlson Says He Doesn’t Lie on Purpose, But ‘When I Get Pissed, I Do Tend to Overstate’

Fuentes, who police say confessed to raping the child on at least two occasions, has been charged with rape and is being held in the Franklin County jail on a $2 million bond.