“After he had offered me chief of staff, I told him I had to go home and talk to my wife about it and then I’d get back to him the next morning. On the Acela train on the way up, it’s leaked that I’m gonna be the next chief of staff in Axios. The only people in the room when he offered it to me were me, Donald Trump and Melania Trump. It’s like, ‘How did this get out? I don’t understand it,'” he recalled. (Here is an Axios story from 2018 titled, “Scoop: Trump meets Chris Christie to discuss chief of staff job.”) 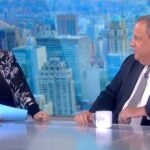 Christie went on to say that when he contacted Trump to decline the role the next day, the then-president asked how he liked the Axios story. When pressed, Christie said, Trump admitted to leaking it himself, with no help from a communications staffer. (Here is the followup Axios story titled, “Chris Christie tells Trump he doesn’t want to be chief of staff.”)

Trump’s relationship with the news media has always been unique. He has been accused in the past of pretending to be his own spokesperson, even coming up with the odd pseudonym or two to speak to reporters. He has long been a keen observer of television ratings, though he has also railed against the “fake news” for years.

Christie appeared on Comedy Central to discuss his new book, “Republican Rescue: Saving the Party from Truth Deniers, Conspiracy Theorists and the Dangerous Policies of Joe Biden.” Though Biden is mentioned in the subheading of the book’s title, the content focuses on the Trump-era GOP and the rise of conspiracy theories in recent years.