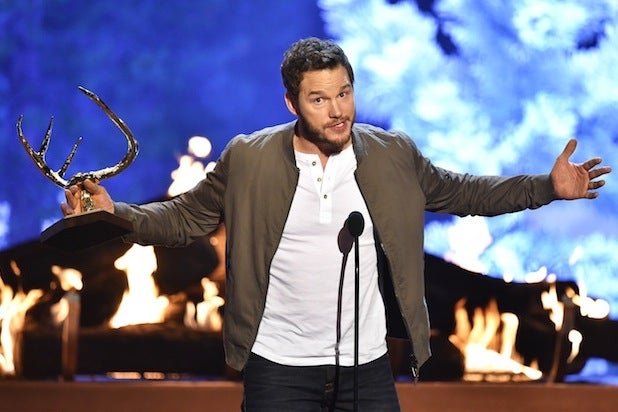 Chris Pratt is having an excellent summer — again.

Last weekend, the dinosaur blockbuster “Jurassic World” blew up the box office with the biggest three-day opening weekend of all time.

“It feels so wonderful to hear the overwhelmingly positive response,” Pratt wrote to his fans on his Facebook page after the movie’s June 12 premiere. “We are incredibly blessed and overcome with joy at the outcome of the movie and couldn’t be more appreciative for the amazing support you’ve shown so far. This is bigger than all of us.”

And this isn’t the first year he’s done it either. Pratt dominated last summer with a starring role in the biggest surprise of 2014, Marvel’s “Guardians of the Galaxy.”

The superhero space comedy came out of nowhere with a $94 million opening weekend, doing $20 million more than was projected and claiming the biggest August opening in history.

With back-to-back summer blockbusters, the former “Parks and Recreation” star has now clearly proven himself as a major box office draw.

With more than 2 million followers on Twitter and 1.5 million-plus likes on his Facebook page, Pratt has managed to connect with mainstream audiences. His charm, which he flashes on screen as well as in promotional appearances, is frequently cited as a major factor in the success of his movies.

Pratt’s appeal lies in his relatability, Dergarabedian said. “He’s a guy you would kill to have a beer with and he probably wouldn’t let you down with a star trip or ego based aloofness,” he said. “He’s Jimmy Stewart with a Triumph motorcycle, muscles, a joke and a leather vest.”

Also read: 7 Reasons Why 'Guardians of Galaxy' Blew Up the Box Office

From joking about his nipples on “Jimmy Kimmel Live!” to claiming impotence in Men’s Health (and subsequently rolling back those statements), Pratt has made his promotional appearances for “Jurassic World” as buzz-worthy as he promised before he even started; clips of his antics have pulled millions of views online.

Pratt is poised to rival the box office takes of such bankable stars as Robert Downey Jr. and Will Smith, who used to own the summer season.

In the mid 1990s, 4th of July was dubbed “Big Willie Weekend,” thanks to Smith generating box office fireworks for the openings of “Independence Day” and “Men in Black.” The sci-fi disaster film “Independence Day” earned $104.3 million in its first full week in the U.S. on its way to becoming the highest-grossing film of 1996.

Another former summer box office force, Arnold Schwarzenegger (who heads back to theaters with Terminator Genisys on July 1) passed the crown to Pratt by offering his congratulations on Twitter.

I'm right next to friggin' CHRIS PRATT. Congrats on the monster opening weekend, @prattprattpratt. You deserve it. https://t.co/ePHQHXt1nd

Pratt is currently shooting Antoine Fuqua’s remake of “The Magnificent Seven” alongside Denzel Washington and Ethan Hawke. He will also star opposite Jennifer Lawrence in Morten Tyldum’s sci-fi film “Passengers.” He’s signed for sequels to both “The Lego Movie” and “Guardians of the Galaxy” as well.